Not working, side hustles and crying: How the workplace will change in 2020 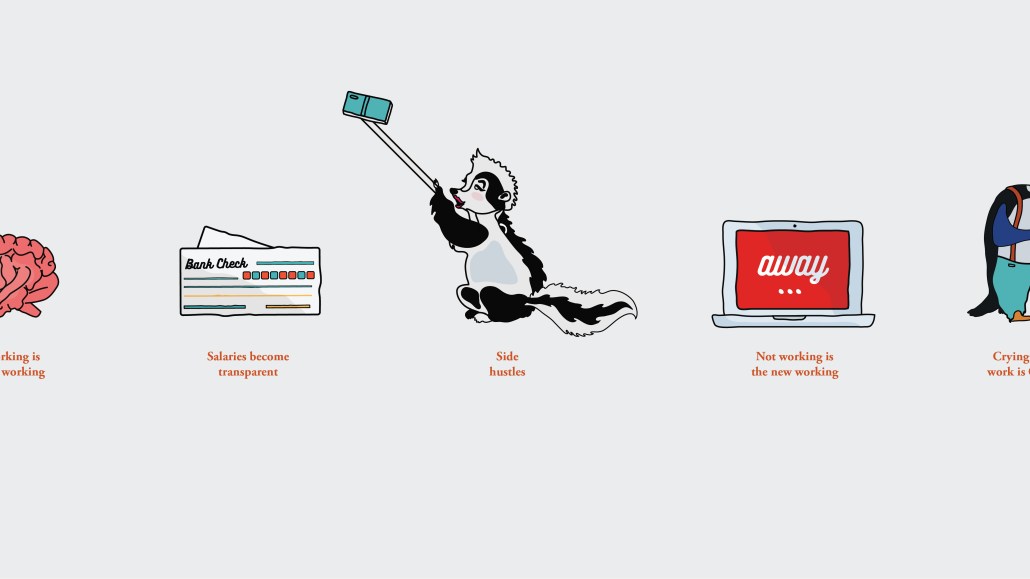 The workplace is changing. We spoke to workplace experts and advertising employees to find out what 2020 will bring.

Not working is the new working
There is a movement against the entrenched machinism of work. Whether it’s because millennials and Gen Z think differently about what work is, as well as more research and knowledge about the effects overwork has on mental health, one shift is that “not working” has taken hold. Josh Cohen, a clinical psychologist who also wrote a book called “Not Working,” says that more people are realizing there is, as the adage goes, more to life than work, and finding room during the workday to actively zone out — and “aimlessly drift.”

Side hustles
Generation Z sees work differently from their antecedents. Careers and work are important, but thanks to growing up during the golden age of influencer marketing and battered with entrepreneurial examples around them, many are starting “work” earlier and doing more than one job at a time. The Open University in 2017 found that 95% of this generation wants to start their own business — compared to 47% of millennials. And 53% of Gen Z don’t plan to rely on only their job as their sole income source. TBWA global director of cultural strategy says this brings a new meaning to what “work” is: 75% of Gen Z wants to be doing multiple roles within one org, her research has found. “They want change and they want it constantly.”

Crying at work is OK
Some of the same forces, says Cohen, are also leading to movements like bringing your “whole self” to the office, popularized by author Mike Robbins. Work used to be about work, but as people spend more time in the office, they’re also bringing everything from their likes, dislikes, hobbies, opinions and more. Some of that also means bringing emotions —hitherto thought of as the one thing you keep away from the office environs — into the workplace. Crying at work is no longer seen as a weakness, but as something natural. “Crying at work is OK, because laughter at work is also OK,” said one ad agency employee.

Salaries become transparent
Google sheets with people’s job titles, locations and salaries across industries, from media to ad agencies to retail, are just one way one of the last workplace taboos — discussing salaries — has been broken. Pay secrecy, research shows, can be used to mask inequities by gender or race — finding out how much people are making in your level can help guide salary negotiations and ensure people ask for the right range. Pay secrecy is getting outlawed in many states — it already is illegal to retaliate against employees who discuss compensation for those with contracts with the federal government. “If you look at content like Refinery29’s Money Diaries, you can really see how people are more comfortable discussing what they make, and how they spend it,” says TBWA’s Rabia.

Mental health at work
“Last week, someone on my team asked me why I was taking time off for a day. I told them it was because I had to see my therapist,” says Omer Nisar of Digitas. “If I normalize it, it gets normalized.” Mental health and burnout are now more openly discussed — and diagnosed. As company executives become more open about it, so too does talking about anxiety caused by work — and figuring out how to fix it. “Being part of a workplace and being vulnerable is OK,” says Rabia.