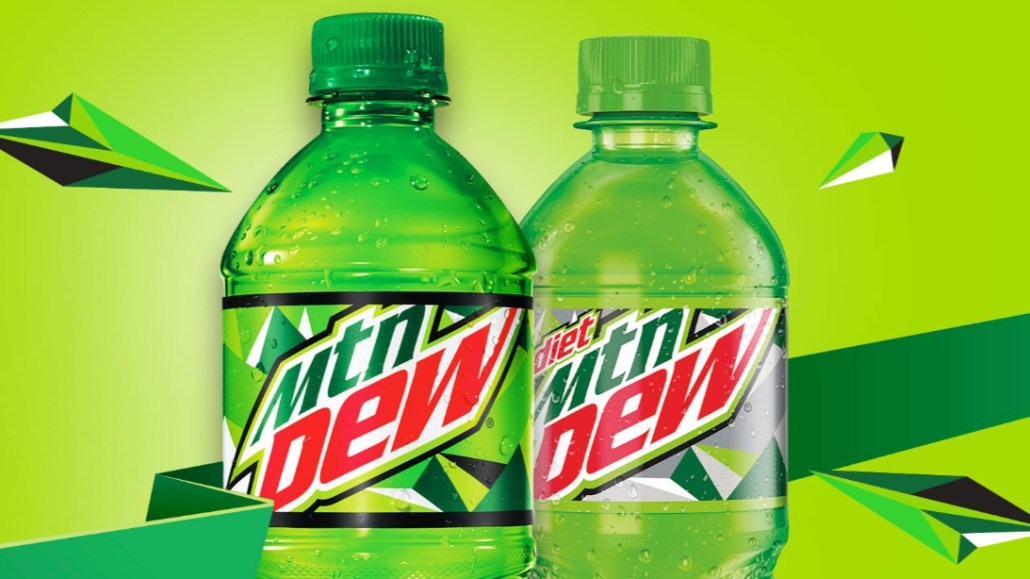 Mountain Dew wants its marketing to be more direct-to-consumer.

To do that, the PepsiCo brand added three people to a new type of team its calling “fan engagement” in early 2019 to comb the internet and create content and products that would resonate with its customers. The group finds posts from customers who also double as “fans” and works with Mountain Dew’s internal social and content team and agencies to make the content or inspire new products.

For example, this past December the brand created a limited edition run of 250 bottles of Mountain Dew scented body wash in response to a push from fans to make it real after a Reddit user posted an image of what looked like Mountain Dew body wash.

The strategy is part of an overall shift to be less prescriptive in its marketing, Mountain Dew said. This extends to budget too: The brand is working to make sure its marketing budget isn’t fully allocated and that there’s a pool of money available for Mountain Dew to experiment with and respond to customers as opportunities arise.

“We do big TV commercials, we do the Super Bowl, we have lots of those big impact things,” said Nicole Portwood, vp of marketing for Mountain Dew. “But the opposite and equal value of the individual can’t be overstated. The resonant value of having a conversation instead of being marketed to can’t be overstated. They want to have a conversation and be connected with brands in a more human way. That’s what makes us different and makes the way we’re approaching this different from just being a soda putting out our message.”

This push for an organization like the PepsiCo brand to be more flexible in its marketing comes as large brands are  challenged by direct-to-consumer brands that aim to win over consumers by fostering direct one-to-one relationships.

Mountain Dew would not share how much budget it devotes to the initiative. In 2018, Mountain Dew spent roughly $116.8 million in paid media, per Kantar, which doesn’t track spending for social channels. From January to September in 2019, the PepsiCo brand spent $90.4 million, according to Kantar.

The team trawls the internet looking for the customers who take baths in Mountain Dew or get tattoos and to “find a way to reciprocate the love that they’re showing,” said Portwood. “That’s a huge part of the challenge. Formalizing this kind of behavior doesn’t come naturally, particularly to organizations of our size, that have lots of processes and a standardized way of doing things. What we’re asking everyone to do is shift their thinking so we’re always looking for opportunities to engage with individuals.”

While a one-to-one fan engagement strategy isn’t nearly as scalable as a digital buy or television campaign, Portwood believes it can still be impactful. If that fan then talks up the brand to others due to what it did to respond to them that has ripple effects, said Portwood. For example, when the brand created a custom cake top for a couple after a woman posted on Twitter that in every photo of her and her fiance he’s holding a Mountain Dew the woman then shared an unboxing of the cake topper on TikTok, which then got nearly 400,000 likes.

The strategy makes sense to Dustin Callif, president of Tool North America, who believes that the current media market is so fragmented that it’s no longer feasible to simply buy a spot on a comedy show to attract your audience, said. “They have a younger-skewing audience,” said Callif. “They only way to speak to this audience is to be doing a more targeted media and creative approach. This seems like a small play that it’d be difficult to scale and impact people but that’s where talkability and earned media comes in.”

“This is absolutely a way for them to be more DTC,” said Michele Sileo, managing director and partner at Eleven. “Leveraging your fan base is not a new thing but what Mountain Dew is doing it in a way to throw a lot of darts at the wall and hope something sticks.”