Mountain Dew gives tweeters a blast from the past 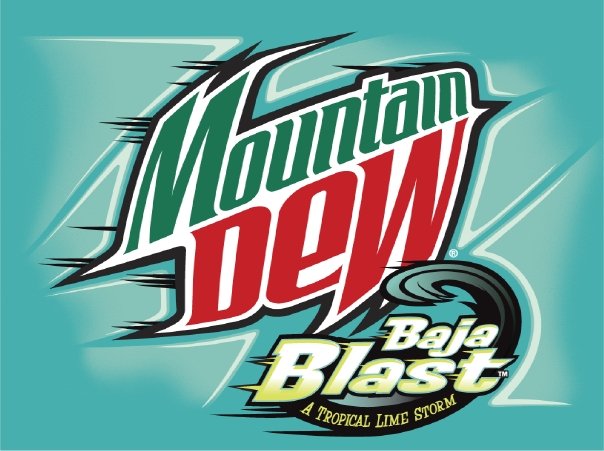 Retargeting is a standard tactic of ad tech. Visit a retailer site, you now expect to be followed by its products everywhere. More often than not, there’s a creepiness to it.

But sometimes retargeting can be delightful. Take a recent effort by Mountain Dew on behalf of its Baja Blast drink. The PepsiCo brand trawled Twitter for people missing the drink and reached out personally, even if the mention was a couple years old, in order to tell Baja fanatics that Mountain Dew was bringing the flavor back. 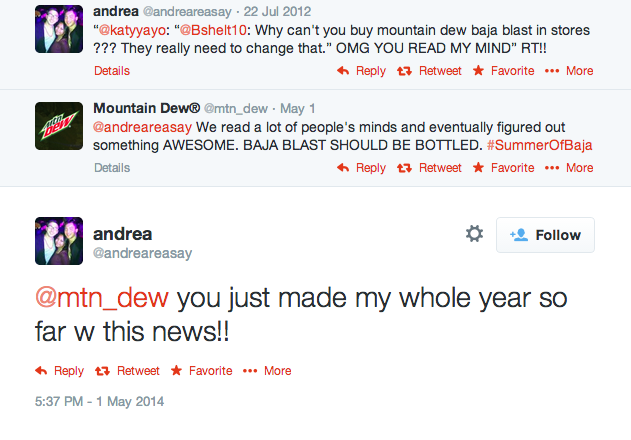 “Mountain Dew has a fiercely loyal fan base,” said Jamal Henderson, senior marketing manager for Mountain Dew. The brand tapped into that group, which has generated some 30,000 tweets in regard to Baja Blast over the last three years, by crafting 500 personalized messages to people who had mentioned Baja Blast in the past. According to Henderson, more than 83 percent responded. 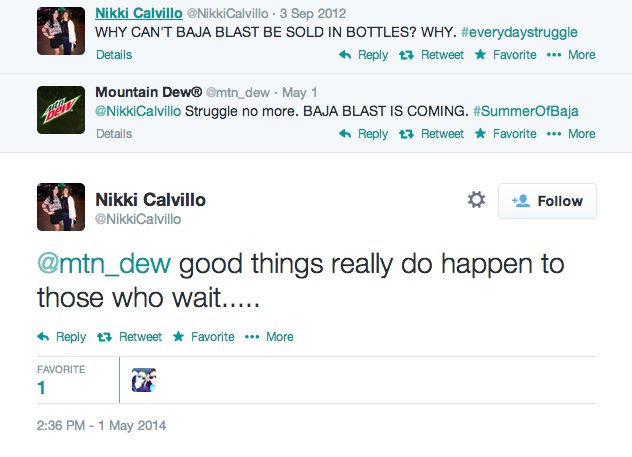 Not all brands have “fiercely loyal” fans, so this kind of approach won’t work for every brand (as the Internet well knows). But according to Henderson, the brand trended twice on Twitter during the campaign. However, it took Mountain Dew years to respond to fan requests for Baja Blast in bottles. So while they might get points for responding to fans, they don’t get any for speed. Think of it as anti-real-time marketing. 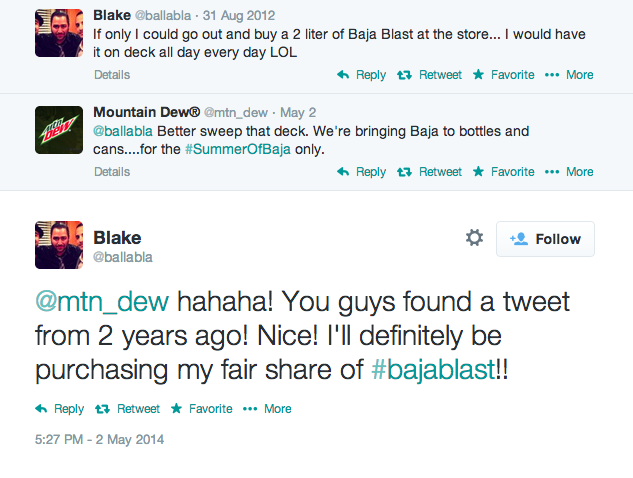 Baja Blast will only be available in bottled form for the summer, so a heavy push says more about the brand’s desire to sell product than it does about their wont to please fans. “Sometimes the simplest ideas are the most impactful,” Henderson noted.

In addition to the always-on social component, the campaign includes a piece starring Dale Earnhardt Jr., Danny Davis & P-Rod – who come together secret-agent style to supply a convenience store with Baja Blast. As of the time of this writing, that video has 1,243,693 views and was posted May 6. A :15 second TV spot and a mobile app accompany the work, too, and of course there’s an under-the-cap contest.

When you have a virulent fan base, you can keep things simple and let them do the work for you. Dew’s initial tweet about the return of Baja Blast garnered 4,600 retweets, or one RT for every 75 fans. Not bad for a product they never intended to bottle in the first place.