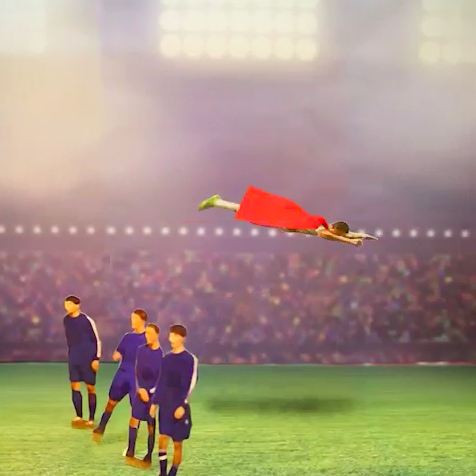 Did you see Holland’s Robin van Persie fly through the air like Superman during the opening match of the World Cup? It was incredible, maybe even superhero amazing. The notion that athletes are heroic is nothing new. Now, Major League Soccer has brought that idea to life in a new lo-fi, high-tech digital campaign for the World Cup.

Pro athletes are the closest thing we have to superheroes in real life. So using owned channels, MLS asked its “young, tech-savvy fans” last month to choose the superpowers of seven pro players. The league then employed old-school illustrators, Vine and Snapchat influencers to transform the seven players into superheroes with attributes like super speed and the ability to turn into a brick wall. Or, in the case of van Persie, to fly like the Man of Steel:

Many of the artists have followings of their own, like Viner Christian Leonard who comes with nearly 825,000 followers. Another, Yves Das, has just 13,000 by comparison and the remaining artists range up in followers from there. The Vine and Snapchat artists all work with GrapeStory, the marketing agency and production house founded by brothers Gary and AJ Vaynerchuk and Vine megastar Jerome Jarre. The Vaynerchuks’ social media agency, Vayner Media, was a partner on the project as well (and, full disclosure, a former employer of this writer).

The artwork is true to each platform, lo-fi in look and feel but complex to create. Take this Vine clip from Jethro Ames portraying Boniek Garcia as he teleports through comic book tiles, evading players until he ultimately scores.

Um, how did he do that? In this one, Omar Gonzalez turns into the aforementioned brick wall.

This is the Snap from Shonduras, whose work coincided with the brand’s launch on Snapchat last week. It’s lo-fi to be sure, at least in form. In function, it’s helping the brand reach an audience of young soccer fans.

EDIT: prior tweet had a typo: @clint_dempsey of @SoundersFC freezing people in their tracks and charging the goal!! pic.twitter.com/G9mY52UkiG

Compare that to Nike’s latest ad, “Winner Stays” (below), which is as polished as you can get. That video has 79 million views and for that reason can’t be discounted. But it’s safe to bet Nike paid a lot more to reach its audience through production costs and media buys. MLS spent its money differently and told Digiday it has already reached 40 million people.

According to Chris Schlosser, digital vp at MLS, that reach has led to “record engagement” for the brand, which is finding its audience through an MLS Tumblr, Twitter, Facebook, mlssoccer.com and KICKTV and Snapchat. The art may not be Nike-sexy, but it’s a different approach to solving the same problem — how to reach soccer fans during one of the world’s most heavily marketed events.