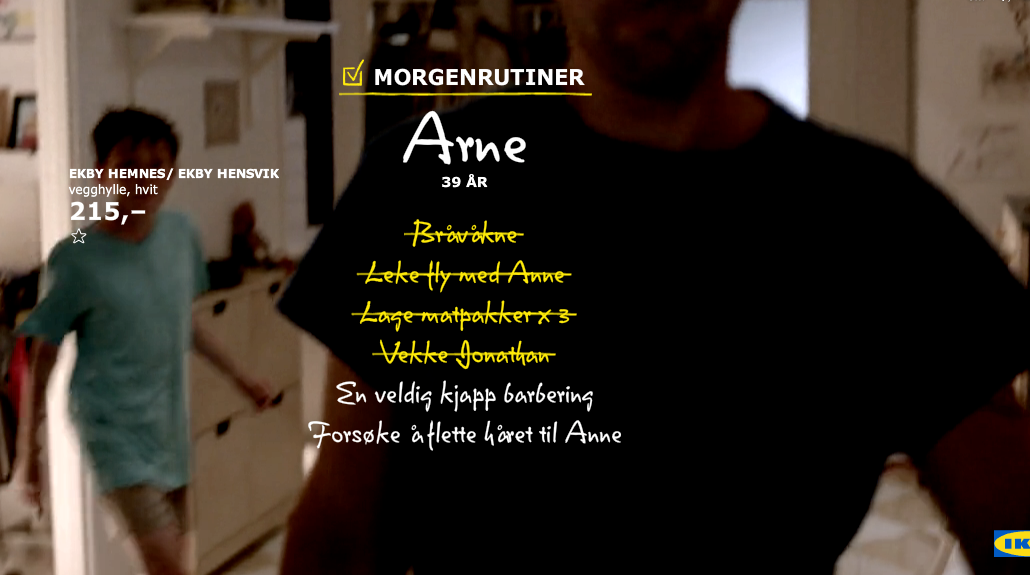 Like email, the death of the microsite is highly exaggerated.

Maybe it’s the end of organic reach on Facebook or the realization that owning is better than renting, but there are signs that digital marketing’s favorite whipping boy is making a comeback.

Just this week, we saw two: one from Toyota, to promote the AYGO car, and one from Ikea Norway (more below). Marriott recently introduced LoveTravelsWithMe.com, to promote a new campaign starring U.S. star soccer goalie Tim Howard. Last week, Travelocity made HowFarAmIFromSharksRightNow.com to show you where the closest shark was, and let you buy tickets to destinations closer to or farther away from it.

Perhaps all hope is not lost for the microsite, which was mostly cast aside in the middle of the last decade as a relic of Internet 1.0, jettisoned in favor of Facebook pages or the holy grail of a Nike Plus-like “platform.” The biggest knock on microsites was they were ephemeral. But as Snapchat proves, disposable is back in style.

“They aren’t meant to be evergreen platforms, or are putting out a particular message,” said John Patroulis, chief creative officer at BBH New York. “The expectation is it’ll lose its relevance over time.”

Microsites are also more popular now because Facebook, Twitter and Instagram are “restrictive,” said Ellie Hardy, director of integrated production at Goodby, Silverstein & Partners. These platforms “don’t have the same experience on desktop as on mobile and tablet,” she said. “They don’t enable brands to showcase their products in a rich environment; they are very static. Microsites allow for more robust experiences that can be had across all devices.”

This wasn’t the case a few years ago. Brands would previously ask to “redirect their old, heavy microsites to their Facebook pages,” said Hardy. Now, there is a shift away as Facebook’s recent algorithm tweaks have decreased the organic reach of a given company. “It’s really for a brand purpose,” she said.

Often, brands do it to convey a message that isn’t core to the brand or that needs to be experienced separately. “It gives you some creative freedom and allows the user to be free of any associations or preconceived notions the brand environment might inspire,” Patroulis said. For clients, it lets brands be a little more flexible in their messaging and target certain groups without worrying that it works for everyone.

AYGO
On Tuesday, Toyota introduced “AYGO 360” — and it only works on mobile. Created by Isobar, the site uses phones’ gyroscopic features so you can walk around the exterior of the car, then jump into the driver’s seat as if it was for real.

This site is in response to data showing that people do all their car-buying research almost exclusively online and is aimed at the 18 to 34 age group. It is the first microsite for the automaker since Isobar redesigned Toyota’s mobile and desktop site last year.

IKEA
Also this week, IKEA and Norwegian agency SMFB created “A Good Day Starts Here,” a gorgeous, whimsical film that lives at a special site. It’s the story of a morning in a regular, IKEA-filled Norwegian home. Press the spacebar at any time and get rewarded with either a look at one of the pieces of furniture in the frame at the time, or take a trip into the mind of one of the kids of the family.

For example, when one of the little girls carries a homemade paper rocket into the room, pressing the spacebar shows her riding it — in her imagination — while an outbound link sends you to the IKEA site to buy pencils, craft paper and other DIY goods from IKEA. At one point, the dad walks into his son’s room, where an 8-bit video game is playing on the screen. Pressing space bar puts you in the game, which you can play too.

Coca-Cola
Coke is the undisputed king of microsites. In recent months, its made last winter’s SweaterGenerator.com (closed now until Christmas, perhaps) and the Super Bowl’s “Chase,” (CokeChase.com), a set of choose-your-own-adventure-style films.

Last year, it launched “The Ahh Effect,” a set of 61-and-growing microsites. Each site has a different URL, with a different number of “h’s” at the end of the “ah.” 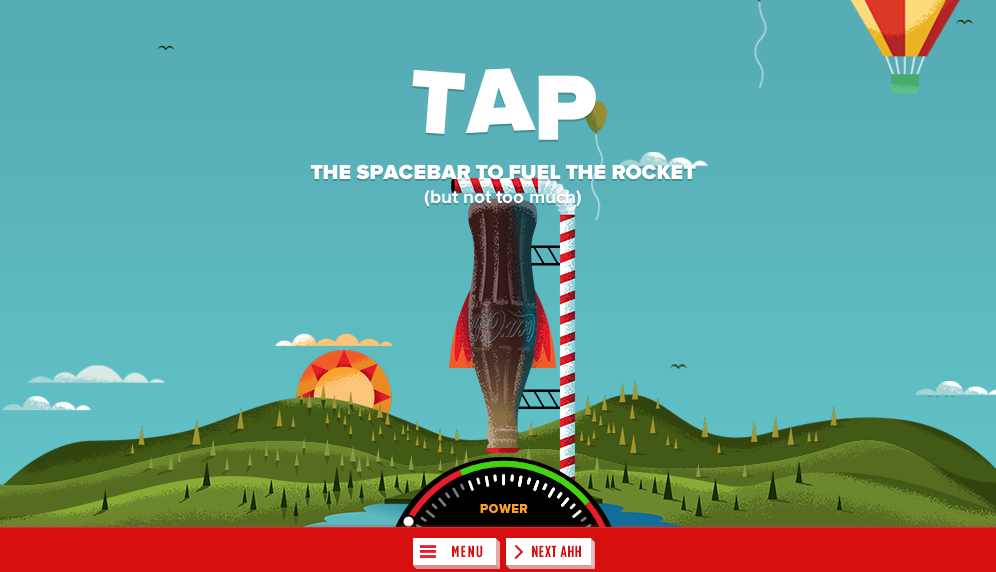 Enter three “h’s” and you get bottle rocket, a game that lets you “fuel” a Coke-bottle rocket and then launch it. Ten “h’s” gets you an ice-toss game. The sites were created by Wieden & Kennedy Portland. It’s an ongoing project, with more URLs added as time goes on.

Burger King
Perhaps the most well-famous microsite of all time was Subservient Chicken, CP+B’s incredibly innovative campaign for Burger King a decade ago, which let you type in commands and watch a huge chicken fulfill them. The brand brought back the chicken this year, reviving the SubserviventChicken.com website to promote the new Chicken Big King sandwich. This time, the effort, via Ogilvy’s David, has a twist, with a film showing what happened to the Chicken after his 15 minutes of fame were up.