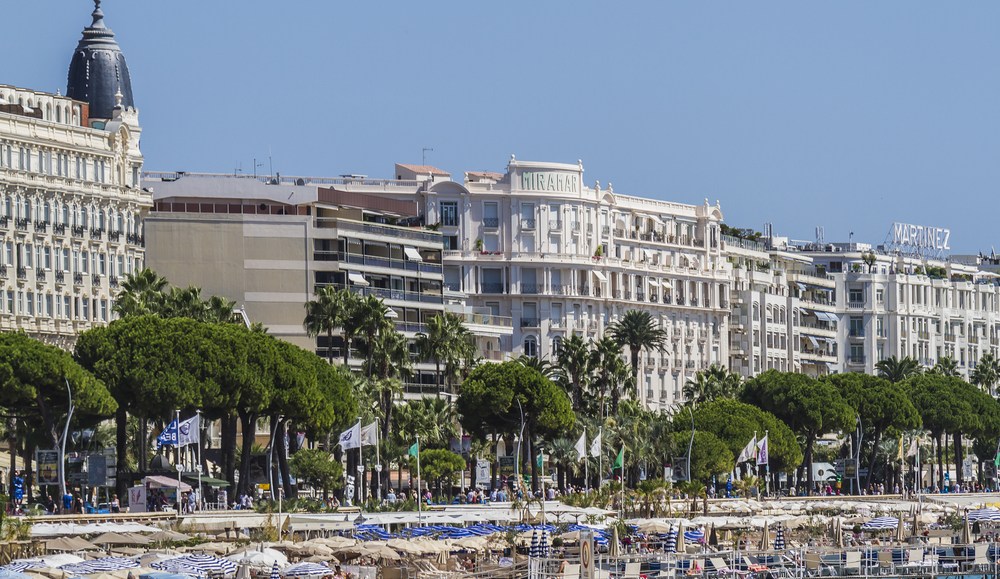 The Cannes Lions may be battling for our attention with the World Cup, but you wouldn’t know there was any other game in town as some 12,500 delegates have touched down on the Croisette to kick off advertising’s main event.

Once a mere festival for ad agencies to celebrate the year’s best campaigns, Cannes has become a rosé-soaked South by Southwest for every big company with a marketing team. Here are a few things Digiday saw on Day One.

The NYT’s native fix
It didn’t take The New York Times long to incorporate its highly-lauded Netflix native ad into ad sales pitch deck. Sebastian Tomich, the paper’s vice president of advertising and branded content,  and executive vice president of advertising Meredith Levien featured it and other native ads created by the Times’s brand studio in a presentation hosted by media agency OMD on Monday.

The pitch was that native advertising is finally accomplishing its goal of elevating the bar for digital ad creative. That much was driven home with the immense praise heaped on the Netflix native ad, which went live last Friday. Some have called it the best piece of native advertising ever created.

Yet questions still remain as to whether native ads — even praise-worthy, headline-grabbing ones — actually help marketers accomplish business goals. The Times’s answer: They do, we just need to decide upon which metrics to use to prove it.

“When you get into topics like capital markets, energy, accounting, thought leadership, the audiences are smaller,” Tomich said. “I’m really happy that brands have started to focus on ‘Do I need millions of pageviews or do I need the right pageview?'”

It’d be unfair to single out native advertising for having yet to prove it can deliver a return. Mobile ad tech execs frequently blame a lack of relevant metrics for mobile ad spend lagging behind mobile media consumption.

As native matures, the metrics will have to as well, Tomich said in an interview with Digiday. Measuring a native ad’s “viral lift” — its numbers of Facebook and Twitter shares — should not be the de facto yardstick with which to measure all campaigns, he said. Rather, the Gray Lady wants to start reaching narrower consumer segments and using alternatives for measuring its effectiveness in doing so. Tomich said that the Times is currently developing a native ad with an energy brand that’s abandoned Facebook and Twitter because its target demo is Fortune 500 executives. As such, the B-to-B campaign will lean heavily on LinkedIn to distribution.

Developing standard key performance indicators (KPIs) will likely come with time and more experimentation and will vary by campaign, he said.

This idea that less is sometimes more was also put forth by Facebook in a recent blog post explaining why brands have seen their organic reach dive in past months. A post’s virality is not necessarily a reflection of its worth.

Tomich did say, however, that Facebook’s reduction in organic reach is the Times’s gain. The paper has suddenly found that its native ads pitch may be all the more alluring in the wake of brands’ frustrations with Facebook.

“Facebook has given the middle finger to brands,” Tomich said. “If a brand doesn’t have any organic reach for their own followings and it’s going to be more expensive for them to buy that reach with their own handles, they should use our brand studio handle to do it for them.”

Who’s this Gatsby?
You do not want to find yourself pitching against this Gatsby fellow. Word is he’s a charmer. Well-dressed, too.

Facebook loves a post-cookie world
Many in Web advertising mourn the problems of using the ubiquitous Internet cookie in a digital world that’s increasingly going mobile. Facebook is not one of them.

The company’s internal mantra is “people, not proxies,” according to Bryan Schroeder, product marketing director of data and audience targeting. Speaking at a Cannes session organized by Medialink, Schroeder said Facebook is banking its targeting on the actual identities of its 800 million-plus members, rather than the very imperfect Internet cookie. In fact, Facebook research with its ad server arm Atlas found that cookies are only 53 percent accurate after three weeks.

“Your reach is overstated and your frequency is understated,” he said. “Your frequency is much higher than you think. We tend to look at it by focusing on real people. We have a unique identifier.”

That unique identifier is a good reason why Internet giant like Facebook, Google, Twitter, Yahoo and Microsoft are sitting pretty in a cookie-less world. For all others, well…

Ogilvy feels sting of cribbed Cannes tweet
Ogilvy & Mather is out in force at Cannes, tweeting up a storm of infographics and the like. One, however, has gotten it into some hot water. It came out a week ago, showing a tongue-in-cheek view of the creative process. The problem is a very similar graphic was tweeted two years ago. The original tweeter is not happy — and he’s got a lot of people on his side.

They deleted their tweet, but here’s the work @Ogilvy stole from me and claimed as their own: pic.twitter.com/g5nZR3OPKq

Meet the Spider-Man of Cannes
He has a remote-controlled scooter and is menacing crowds on the sidewalk.

Maurice Levy looms large.
Weird as it is to Americans, Publicis Groupe CEO Maurice Levy is a household name in France. He’s looming large in Cannes, in the wake of his aborted merger with Omnicom, thanks to being plastered all over billboards promoting his cover story interview with a French magazine.