By the numbers: What marketers need to know about the Rio 2016 Olympics

Come August, athletes aren’t going to be the only ones competing at the Summer Olympics in Rio de Janeiro. With fewer than 60 days before the games kick off, marketers have already started ramping up their efforts around the event.

“It may seem a bit premature, but it’s pretty typical for brands to start capitalizing on the Olympics 100 days prior,” said Basia Wojcik, director of global and Olympic consulting at The Marketing Arm. “Especially in the U.S., this is when NBC starts their promotions, so it makes sense.”

Sponsorship and broadcast revenue as well as global audiences for the Olympics have continued to grow every year, so it’s no surprise that brands are willing to shell out upwards of $1 billion for each four-year Olympiad period. But experts say social media is expected to play a more important role in 2016 than ever before.

“Sports particularly dominate the second screen due to their real-time nature and the Olympic games provide a prolonged version of this,” said Luke Bonner, sports and entertainment marketing manager at GYK Antler. “There are tons of opportunities for brands to capitalize on social media in real time.”

Since the largest global sporting event is so sprawling, we’re breaking it down into more digestible bits for you. Here are the Rio de Janeiro Olympics, by the numbers:

Revenue breakdown of the International Olympics Committee
47 and 45 percent for broadcast and sponsorships each, and only 8 percent from ticket sales and licensing 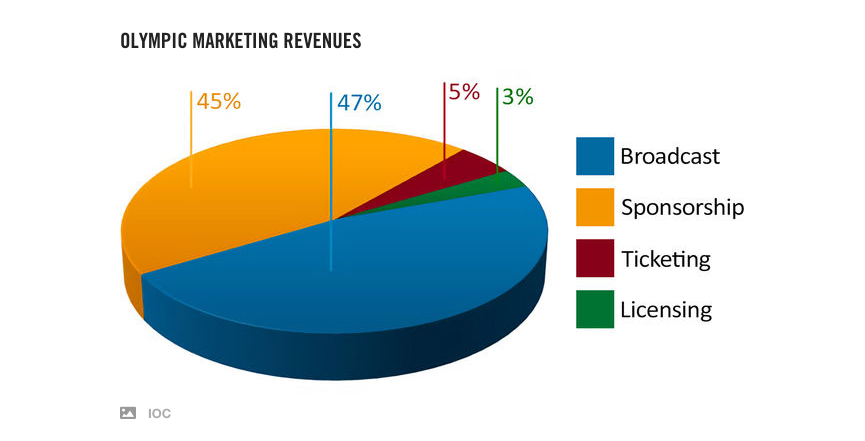 Projected cost of the Rio Olympics
39.1 billion reais ($11.5 billion), according to the Public Olympic Authority of Brazil

Number of domestic sponsors (TeamUSA)
28, including Hershey’s, Hilton, Chobani and AT&T among others

Number of hours of Olympic programming NBCUniversal will produce this year
6,000+ hours

Net ad spend increase in the global market because of Olympics 2016
$2 billion, according to ZenithOptimedia

Ad-spend increase in the U.S. in 2016 because of the Olympics
4 percent, according to ZenithOptimedia

Viewers likely to use second-screen devices during the Olympics
85 percent of likely Olympic viewers, according to Global Web Index

Number of minutes users are likely to spend on online video
41 minutes on average, according to Global Web Index