Marketers turn up the heat on the duopoly

The duopoly is on our minds — and on marketers’ minds, too.

Tear down these walls
There is an imbalance of power right now. Facebook and Google have never been more powerful. It’s why our new issue focused on this duopoly.

Now, there are signs that marketers are fighting back. Publishers are mostly bystanders, other than cheering on marketers for starting to demand changes to how Facebook and Google operate.

Look no further than P&G CMO Mark Pritchard using the IAB meeting to demand changes to the current ad system. What Pritchard said — digital advertising was “murky at best, fraudulent at worst” — was not surprising to anyone paying attention. Why he said it is what’s important. It implied that the world’s largest advertiser would start to use its leverage to rein in, as best it can, the duopoly. That move was followed by the Association of National Advertisers following suit with demands that the platform open up their so-called walled gardens to third-party measurement.

It came as no surprise then the past week has seen Google under fire in the UK for running ads next to extremist content. It’s noteworthy this piece appeared in Rupert Murdoch-owned Times of London. News Corp PR has helpfully been spreading it around, along with the regular critical remarks News Corp CEO Robert Thompson has made about Google and Facebook. Surely a coincidence. 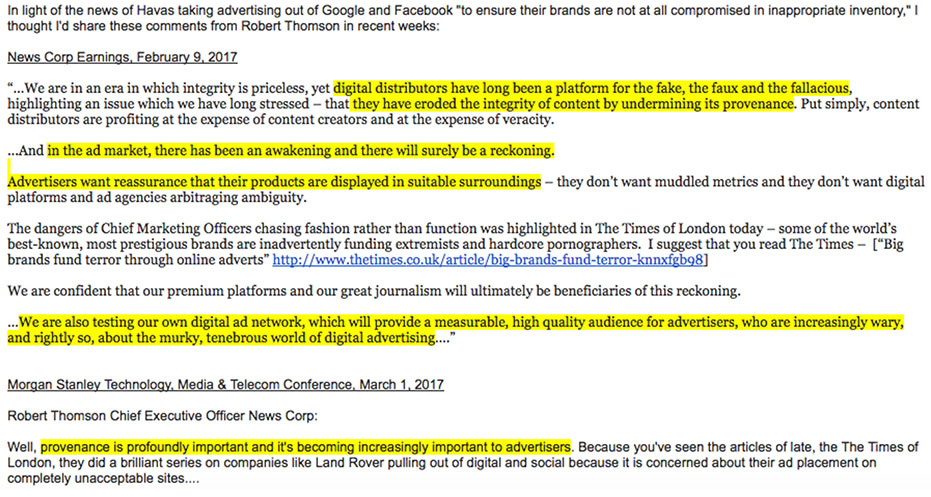 This is 2017. Any marketer who doesn’t know that there are some scruffy neighborhoods on YouTube is, at best, willfully ignorant. Blame procurement for driving down the prices ad buyers pay. Blame the mythical lazy 25-year-old ad buyer. But none of this is new. The idea that Martin Sorrell suddenly realized that YouTube has a lot of appalling content is a farce. Moral outrage from ad buyers should be taken with a grain of salt.

The most likely interpretation: This is a negotiation. Marketers have typically had the balance of power in media. This has changed to a degree with the rise of platforms, with their millions of advertisers insulating them, to a degree, from following the diktats of even the biggest advertisers individually. But as a collective, the buy side still has leverage. Witness Google saying it will take steps to address the concerns of buyers on extremist content. Expect a compromise on measurement disagreements to follow.

Snapchat’s media problem
Publishers have rushed headlong onto Snapchat, eager to find that most elusive of species: the millennial. The jury, however, is still out on Snapchat’s media ambitions, and there’s ample evidence building that Instagram will steal Snapchat’s thunder here as well.

The biggest issue Snapchat faces is slowing audience growth. At this stage of a platform, one publishing exec noted to me, Snapchat should still be growing fast. It isn’t. That’s a red flag, particularly if you’re a publisher who has invested in an eight to 12-person Snapchat team. On this week’s Digiday Podcast, Gizmodo Media Group CEO Raju Narisetti said Snapchat isn’t a priority. The publisher can’t justify the costs based off what it saw with Fusion’s Discover channel.

The struggles Hearst has had with Sweet, which we chronicled this week, is another sign that media on Snapchat isn’t in a great state. The goals for Sweet were ambitious, but soon it devolved into lowest-common denominator listicle fare. Take a spin around Discover and you’ll find a lot of the same bland viral sameness that has plagued digital media on the web. This is not the highly curated experience Snapchat promised. Here’s our ace Snapchat reporter Sahil Patel on the danger:

“Once Snapchat Discover was redesigned to feature visual tiles, eye-opening ‘cover images’ have become the way to get people to click on your channel. Multiple Discover partners have said daily viewership jumps and down dramatically — 100 to 200 percent in some cases — depending on what story is leading the edition. This works for news, gossip and entertainment sites, but the problem is there are a lot more publishers of this type on Discover, which has grown from an exclusive club of less than 20 publishers to more than 40 today. For Snap, more Discover partners means more viewers and ad dollars. For media partners, it’s going to be harder to stick out from the crowd — which now also includes TV networks getting paid by Snap for the company’s newest priority: TV-like shows.”

Odds and ends
Email from a publishing exec after we published Hearst’s challenges with Sweet: “BTW — don’t you love how I called Snapchat when everyone else was going hog wild?”