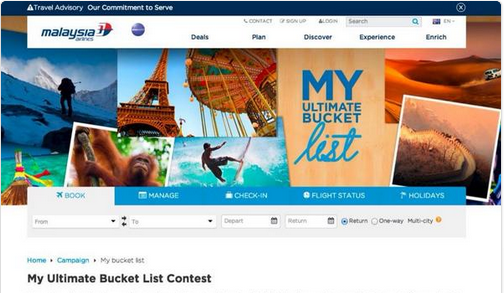 In an era when ill-timed or tone-deaf digital brand campaigns are launched just about daily, Malaysia Airlines has set a new low bar for bad taste.

The beleaguered airline, which has lost two planes in recent months in disasters that have claimed 537 lives, on Monday announced a “My Ultimate Bucket List” campaign in which customers were asked to list the things they would like to do before they die.

The airline, which has since changed the name of the promotion, is offering prizes, including free round-trip flights to Malaysia from Australia and New Zealand.

“Malaysia Airlines has withdrawn the title of a competition running in Australia and New Zealand, as it is found to be inappropriate at this point in time,” the airline said in a statement on Wednesday.

“The competition had been earlier approved as it was themed around a common phrase used in both countries. The airline appreciates and respects the sentiments of the public and in no way did it intend to offend any parties.”

The campaign was intended to stanch the bleeding at the airline, which has been struggling in the wake of the recent tragedies: Last week, it announced would cut 6,000 jobs and scale back its route network. This week’s stunt is unlikely to reverse the airline’s fortunes. Quite the contrary.

Customers who booked travel between Sept. 1 and Dec. 31 were asked to tell the airline which destinations were on their so-called bucket list. The most creative answers were to go into a draw to win 12 round-trip, economy-class tickets.

The airline probably should have expected some of the responses that swiftly made the rounds, though.

Malaysia Airlines “My Ultimate Bucket List”, cause if there r things to do before you die, MA is the best way to fly pic.twitter.com/nDejYoEHlo

Brand missteps on social media have become all-too familiar. Another bit of social media marketing that fell flat this same week, for example, did so more for reasons of bad timing than bad taste: A campaign for Fox’s “Sleepy Hollow” had some playful fun with the show’s Headless Horseman villain, including shareable art and the hashtag #headlessday.

The problem? The campaign was launched the same day news broke that kidnapped U.S. journalist Steven Sotloff had been beheaded by ISIS terrorists.

Fox Home Entertainment issued the following apology: “Twentieth Century Fox Home Entertainment recognizes and apologizes for today’s promotion for the Season One DVD release of Sleepy Hollow. We regret the unfortunate timing of our announcement and our deepest sympathies go out to the families of all involved.”