EOS, the maker of the recognizable bulb-shaped lip balms, is being sued for causing blistering and other harsh reactions.

Rachael Cronin, the customer who filed the class action lawsuit, claims the lip balm caused her lips to suffer from “severe rashes, dryness, bleeding, blistering, cracking and loss of pigmentation” that lasted for days and even months, according to the lawsuit obtained by Digiday.

EOS, which stands for Evolution of Smooth, has gained notoriety for its social media practices, employing so-called “brand ambassadors” like Jennifer Lopez and Kim Kardashian to talk positively about the lip balm and post with the product on Instagram.

Cronin says that its “viral marketing frenzy” dupes people into thinking it’s an essential item to use.

“The message EOS is trying to mislead consumers about is clear: EOS lip-balm is a daily necessity requiring constant use regardless of the actual condition of your lips to improve your health, diet, and appearance,” the suit states. “In reality, behind the smoke-and-mirrors, EOS is anything but smooth.”

Cronin says she posted pictures on Facebook in December of the harsh skin reaction, leading to a “frenzy of responses” from others who claimed the same thing happened to them and posted pictures, as seen below, of the reaction. 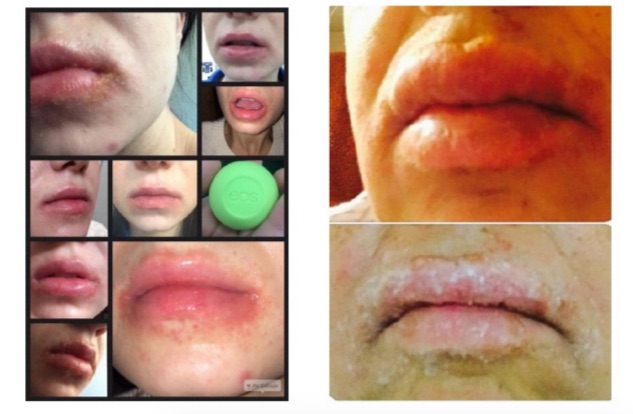 While the lawsuit doesn’t state how much she and the other individuals are suing for, Cronin hopes that EOS engages in a “corrective advertising campaign.”

But fans on Facebook posted to EOS’ page defending the company, writing that they’ve never experienced a problem with the lip balm.

“I have been using these since they came out in 2009, and nothing has happened to my lips. Sounds like people may have shared their eos with someone who has a disease, and now they’re blaming EOS,” wrote a fan.

In a statement, EOS told Digiday said the lawsuit is “without merit,” adding that its “products are made with the highest quality ingredients and meet or exceed all safety and quality standards set out by our industry and validated by rigorous testing conducted by an independent lab.”