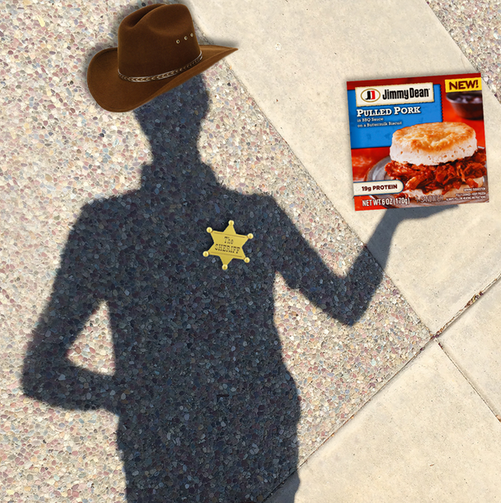 Jimmy Dean is a brand best known for its lardy sausages and patties and other bizarre, calorie-laden breakfast food creations (Pancakes and sausage on a stick, anyone?). But now, the breakfast brand is expanding its menu and stepping up its marketing game. Earlier this month, it introduced its new line of frozen lunch and dinner offerings, and an accompanying marketing campaign with agency TBWA Chiat Day Los Angeles and experiential agency Fake Love.

The campaign is built around its brand mascot, the sun — literally — and features the world’s first “solar-powered GIFs.” Launched earlier this month in Los Angeles, the “Sun Cinema” campaign was a live, branded-entertainment installation that harnessed the power of the sun to create solar-powered GIFs. Not because there’s anything inherently greener or healthier about Jimmy Dean’s offerings but more to call attention to new lunch and dinner offerings.

“The sun is intrinsic to the Jimmy Dean brand and represents the optimism, positivity and warmth,” Rachel Friedstat, the brand manager of anytime meals, Jimmy Dean, told Digiday. “We are introducing food beyond breakfast, because the sun doesn’t just rise in the morning and go away, but stays all day.”

The installation, which lasted between Sept. 8 and 12, involved a kinetic sculpture that used kitchen utensils and mirrors to cast shadow animations onto a 10-foot-tall and 25-foot-wide wall. These “stories” were then captured and converted into GIFs to serve as drivers of the campaign on Jimmy Dean’s social channels, including Facebook, Twitter, Instagram and Vine with the hashtags #SunPowered and #SolarGIFs.

The brand is also asking consumers to engage by sending in a “shadow selfie” as part of a sweepstakes. It encouraged consumers to take and share pictures of their own shadow silhouettes with the hashtag #SunPowered, for a chance to win a month’s supply of new Jimmy Dean lunch and dinner entrees. The campaign also includes two new television spots starring Jimmy Dean’s anthropomorphic sun.

“We’re going into a new area, so we want to raise awareness that you’re not just going to find us in the breakfast section,” Friedstat said. “We’re offering our loyal consumers a new way to not only consume the brand, but also connect with the brand through either the installation or our social channels.”

While the sweepstakes and the social campaign are ongoing, the social buzz around the hashtag #SunPowered is limited — with only 45 mentions in the last 12 days, according to Topsy. According to Crimson Hexagon, Jimmy Dean has been mentioned on Twitter 6,495 times this month, but only 79 tweets specifically mention #SunPowered, #SolarGIF or #ShineAnytime. However, related content on Vine has performed slightly better, with the phrases “Hollywood,” “sun,” “star” and “piiiiig stretch” (presumably for the pulled pork vignette) getting slightly more traction.