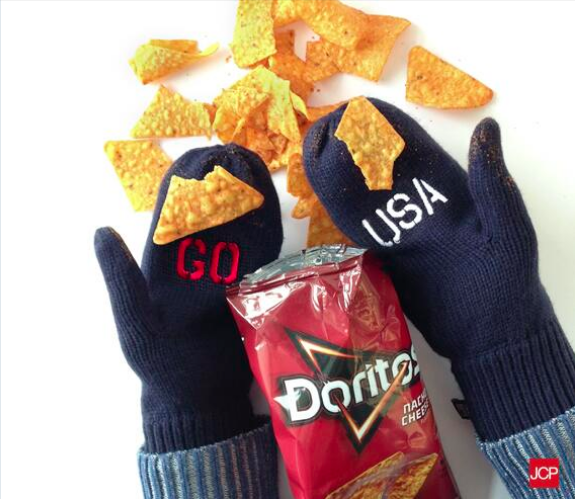 You wouldn’t know it judging from the seeming success of its Twitter campaign Sunday, but JCPenney and its agency Evolution Bureau and partner agency Victors & Spoils were sweating bullets midgame — and it had nothing to do with the Broncos offense. The brand sent out a couple of deliberately muddled tweets as part of an innocent little “tweeting with mittens” stunt for the Super Bowl. But the speed with which they went viral — for all the wrong reasons — threw the brand and its agency into panic mode.

The department store sent out two tweets during the beginning of the big game that were riddled with typos. Immediately, the social Web was all over it. The assumption was that — obviously — JCPenney’s social media manager was either actually drunk, or pretending to be drunk. Thousands of people retweeted the tweets and speculated that it was possibly a fake hack — or that the social media manager was about to be fired.

Without having anything better to talk about — there wasn’t much of a game on the field and there was no real-time marketing magic moment like last year’s blackout — even other brands, like Svedka, Coors Light, Pizza Hut and Snickers, started piling on. 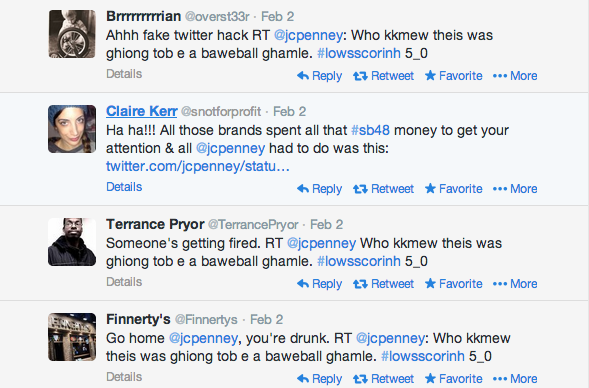 But here’s the kicker: It never even occurred to the company or its agencies that people would accuse them of staging a hack — or, for that matter, being drunk. In reality, the tweets were part of JCPenney’s ongoing campaign for the Olympics, which involves promoting its special Go Team USA mittens. The original plan for the Super Bowl was to tweet a stream of these misspelled, clumsy tweets through the big game and then reveal the #tweetingwithmittens hashtag at the end.

“Our client JCPenney didn’t have a Super Bowl commercial, but they came to us and said, ‘we are a big sponsor of the Olympics and they have these mittens, so can we do anything using the Super Bowl stage to promote Team USA and the mittens?'” explained Steve Babcock, executive creative director at EVB who led the JCPenney “war room” on Sunday at EVB’s Boulder office along with Noah Clark, ECD at V&S. “This was kind of a weird ask, and with the timing and budget it had to be earned media, which is how we came up with the tweeting with mittens idea.”

JCPenney’s quick and measured response to a near-calamitous misunderstanding resulted in a viral success for the brand. Without paying a whopping $4 million for a Super Bowl spot, JCPenney was the second-most mentioned brand on social during the big game, after Budweiser, an official sponsor. The two “texting with mittens” jumbled tweets along with the final reveal tweet all together generated 46,951 retweets and 21,357 favorites.

As Babcock explained, the jumbled tweets were meant to be a cute, fun way to tie the mittens into social, because tweeting with mittens is obviously pretty difficult and would result in messy tweets.

“We didn’t even think of the drunk thing!” said Babcock. “I don’t drink and I’ve never sent a drunk tweet, so it was definitely an oversight on my part — call us naive.”

By the time Babcock and his team of five huddled at the agency, along with Sean Ryan, director of social and mobile at JCPenney who was on the phone, they knew they had to decide quickly how to act next.

“All of the a sudden, after [Sean] posted the first one, it was getting like 50 retweets a second and we were all like, what? Oh crap, this is doing what we wanted, but I don’t think any of us thought it would do this,” said Babcock. “It was picking up way faster than we thought and maybe getting a little out of our control.”

Because the game was such a blowout and Babcock and his team were getting nervous about leaving people to run wild with the assumption that JCPenney was drunk-tweeting — Ryan was fielding a lot of concerned calls — everyone agreed to reveal the mitten punchline after just two tweets.

JCPenney is a conservative brand — it’s pretty much the department store for the “mom jeans crowd” — and being associated with drinking is definitely not something it was going for, but ultimately the amount of earned social media attention it got is what most brands dream of.

“A lot of people in [Sean’s] position would have freaked, but he was very methodical and cool about it, very calm,” said Babcock.

And even after people got the joke, people on Twitter continued to talk about JCPenney and were using the hashtag #tweetingwithmittens. “Good Morning America” even tweeted a picture of its office wearing mittens at their computers to get in on the joke.

“We didn’t anticipate how much other brands would interact with this, it was really interesting,” said Babcock. “It made us realize that all these brands had their command centers going, looking for that Oreo moment, waiting for the lights to get shut out, and all of a sudden we were the ones who shut out the lights.”

Correction: This story has been updated to reflect the collaboration between EVB and Victors & Spoils.