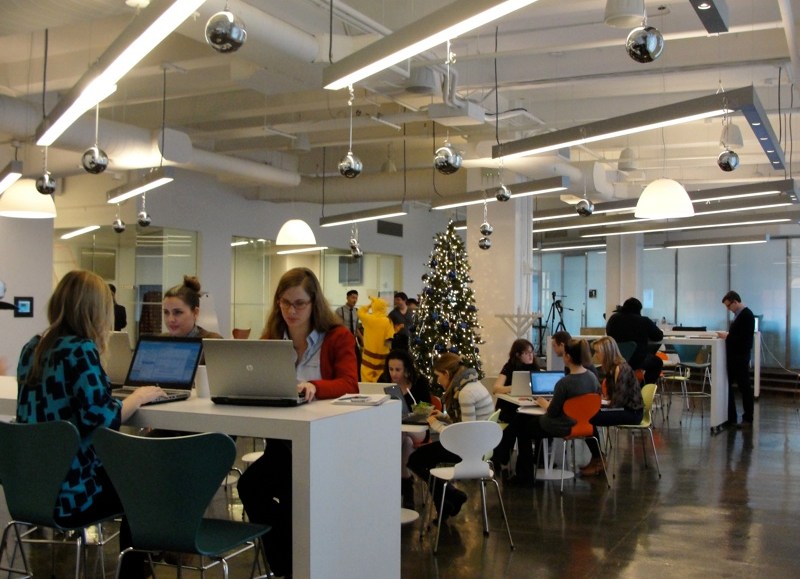 Digital agency 360i has come a long way since 2006, when it was focused predominantly on search marketing and employed just 60 people. It’s now grown to over 400 staffers, with offices in New York, Atlanta, Chicago, Detroit and San Franciso, and it was sold to holding company Dentsu in 2010. Digiday went to tour the company’s main office in New York’s Tribeca neighborhood.

“We were lucky in that we were able to design and build this space from scratch when we moved into it,” said CEO Bryan Wiener. “We held focus groups to ask people what was important to them. Nobody here has to work here. These people have the credentials to go and work anywhere, so it’s important they want to be here. My job as a leader is to help create — or, more to the point, enable — a culture that helps that.” 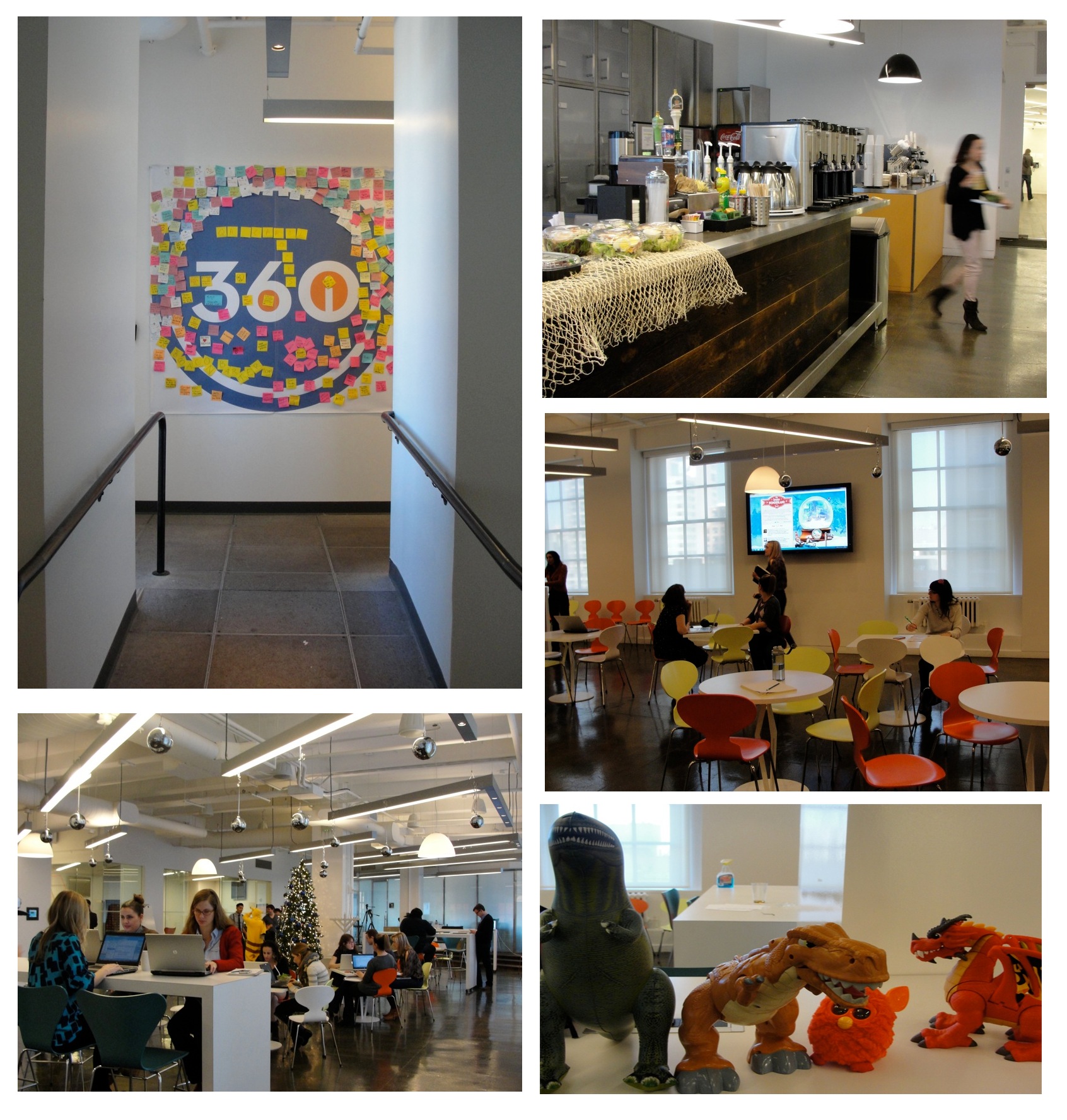 “We provide free coffee, beer and soda in the kitchen, and food from time to time. We also have a number of other initiatives such as dry cleaning services, too. Anything we can do to help our staff with those little inconveniences definitely helps. Staffers often come to communal areas to meet informally and to work. We aimed to create an environment full of ad-hoc collaboration spaces. The wall with the Post-It notes is our ‘kudos wall.’ People wanted a simple way to recognize each other’s work and achievements, so we put this up as an easy way for them to do so. We’re currently working on a digital version which’ll be ready soon.” 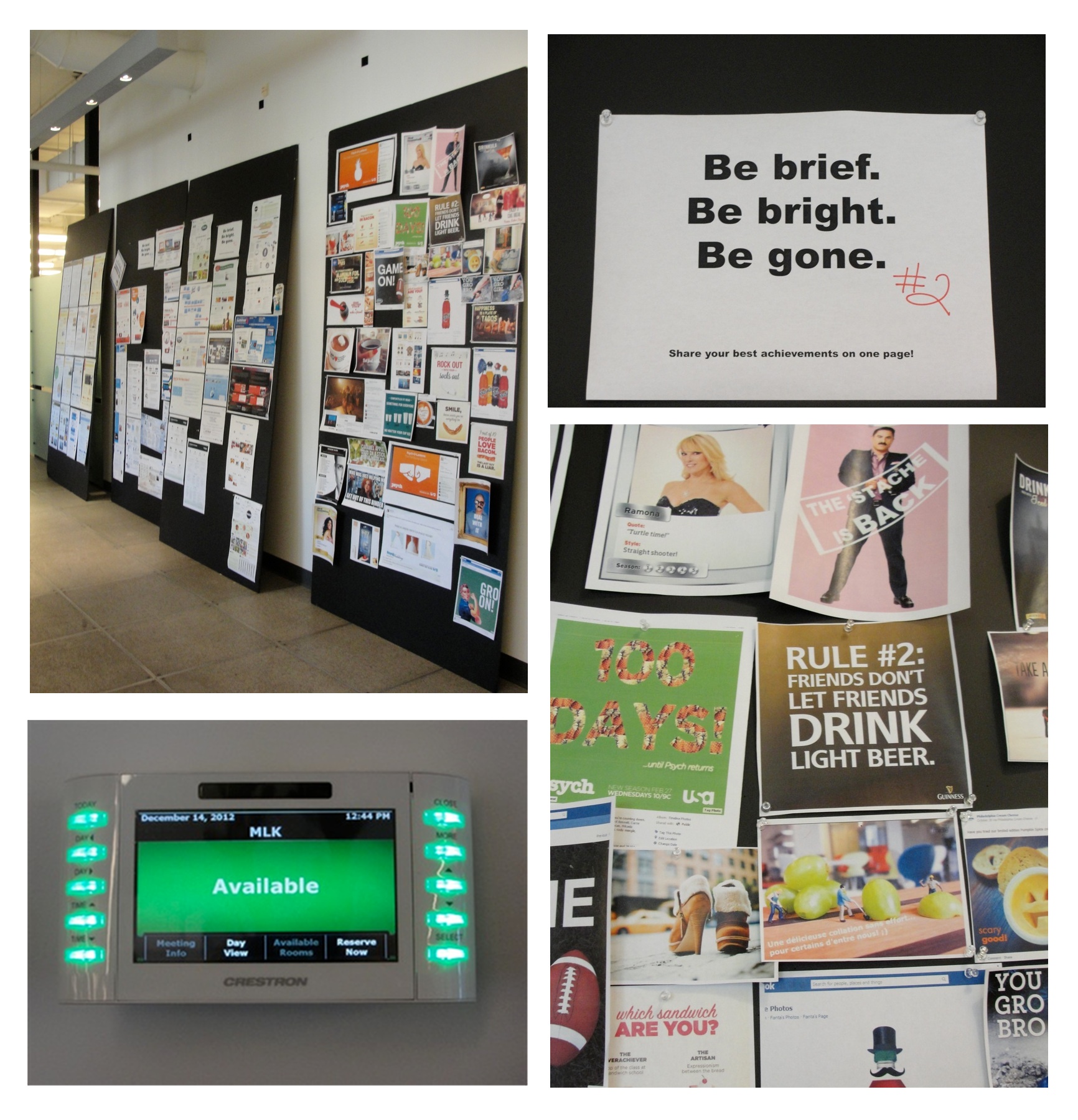 “This is one of the busiest hallways in the office, so we invite staffers to share their work in one-page summaries, highlighting the thinking and outcome behind a piece of work. The idea is to demonstrate the mantra ‘Be brief. Be bright. Be gone.’ We try to use it to foster inspiration and healthy competition. Our conference rooms are all named after famous leaders, and accompanied by a famous quote of theirs. We have a Steve Jobs, a Ghandi and a Martin Luther King, for example.” 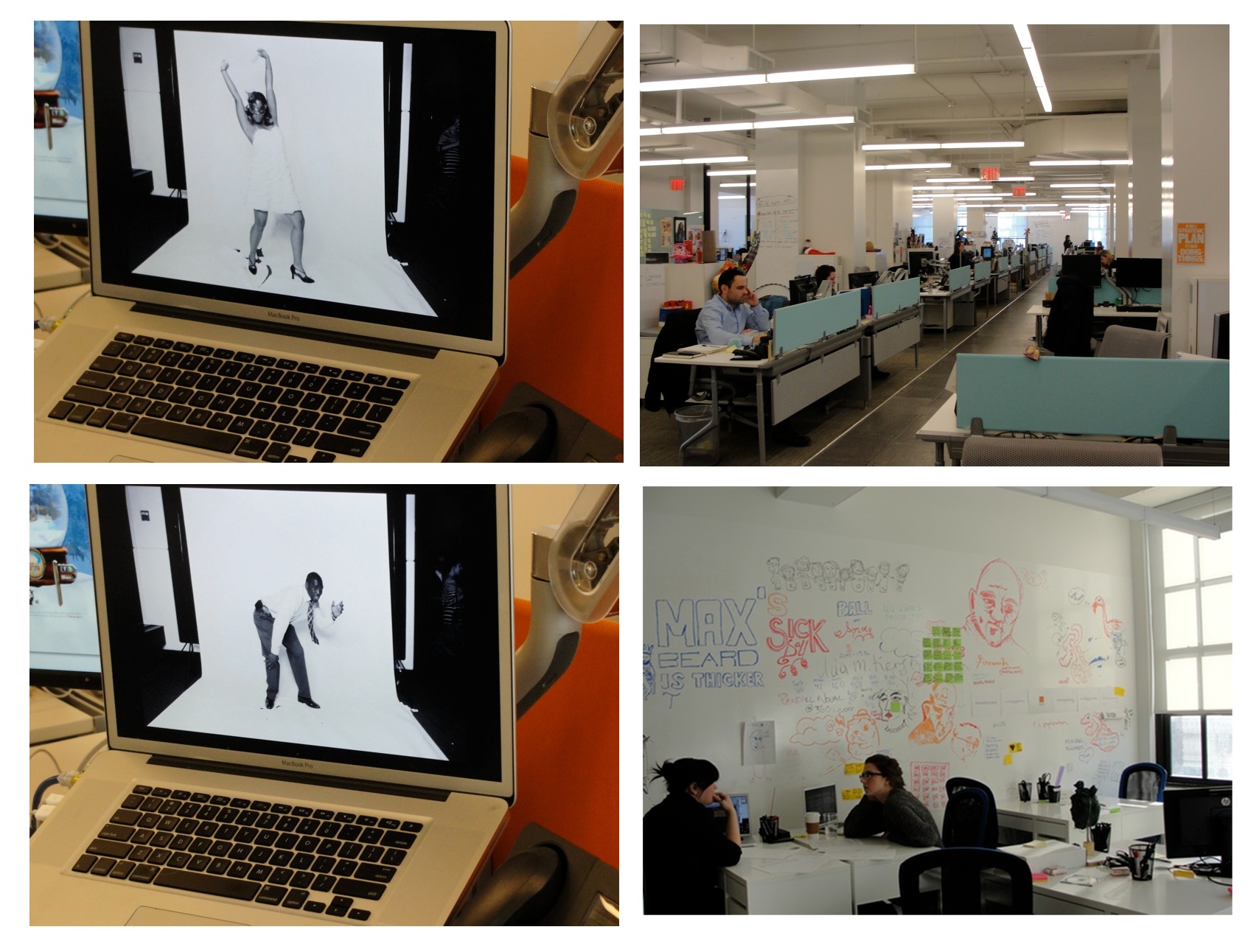 “We have an intern program through which we welcome Miami Ad School students for 10 week stints. Our latest outgoing students wanted to find a way to thank us, so came up with this cool idea of ‘the longest dance move‘. It involved each of our staffers taking part in a stop-motion video at our holiday party.” 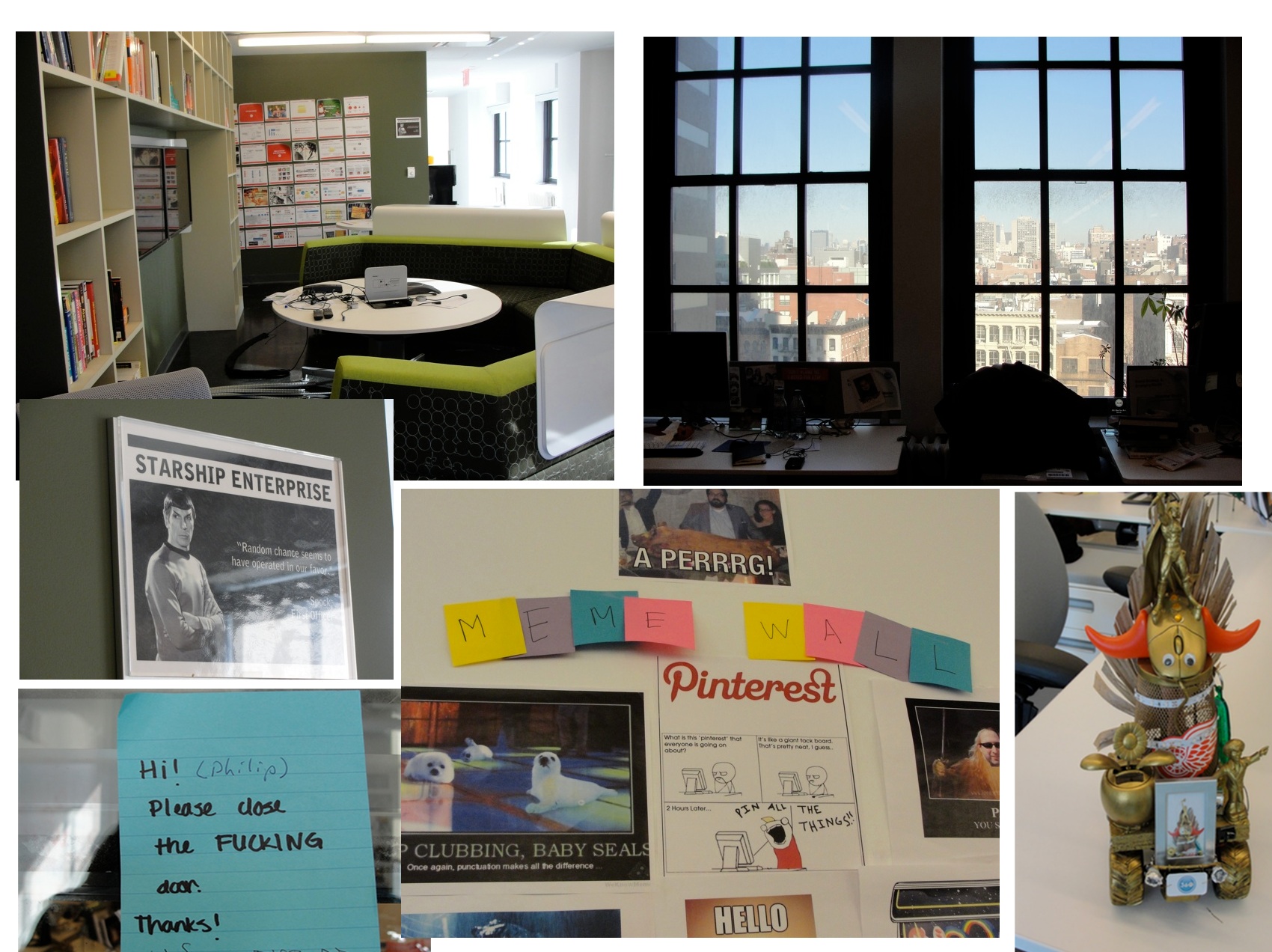 “Within reason, we like to think of office as belonging to our staffers. The only rules we have with regards to things like decoration are the ones we have to have. We have idea paint on every wall for two reasons: It’s useful, but it also lets people make the space their own. The office is an intentional work-in-progress. Really you always should be as an agency, too. The Golden Mouse is an award that gets passed around internally to recognize great work. It started out as a mouse, but now every time someone wins it they get to add an item to the award.” 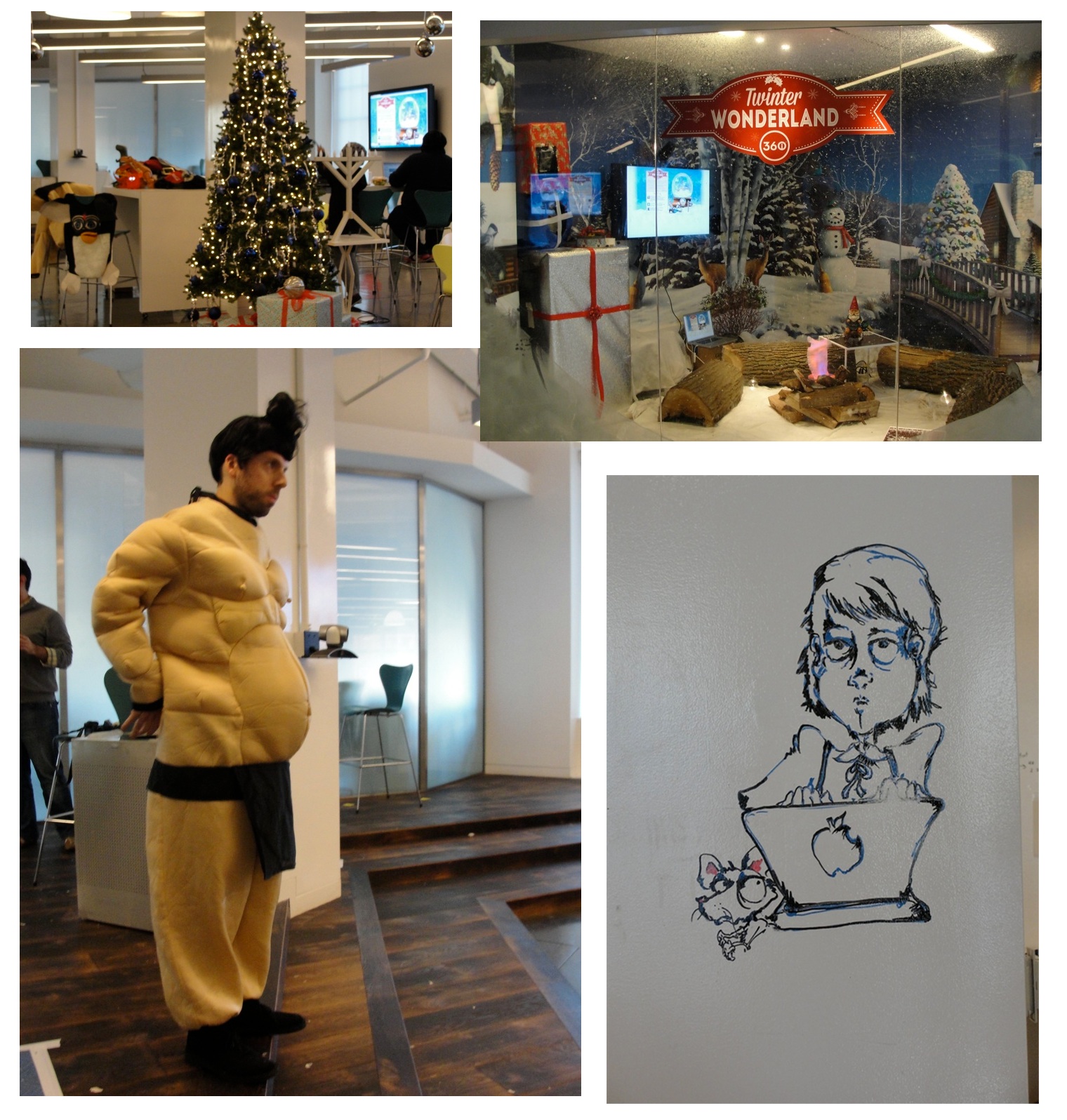 “To help raise money for Hurricane Sandy relief efforts, we set up the TwinterWonderland.com campaign. It’s a live Webcam set up in one of our conference rooms. Each time someone tweets the hashtag #TwinterWonderland, it snows in the room, and we donate $5. So far we’ve raised $40,000.” 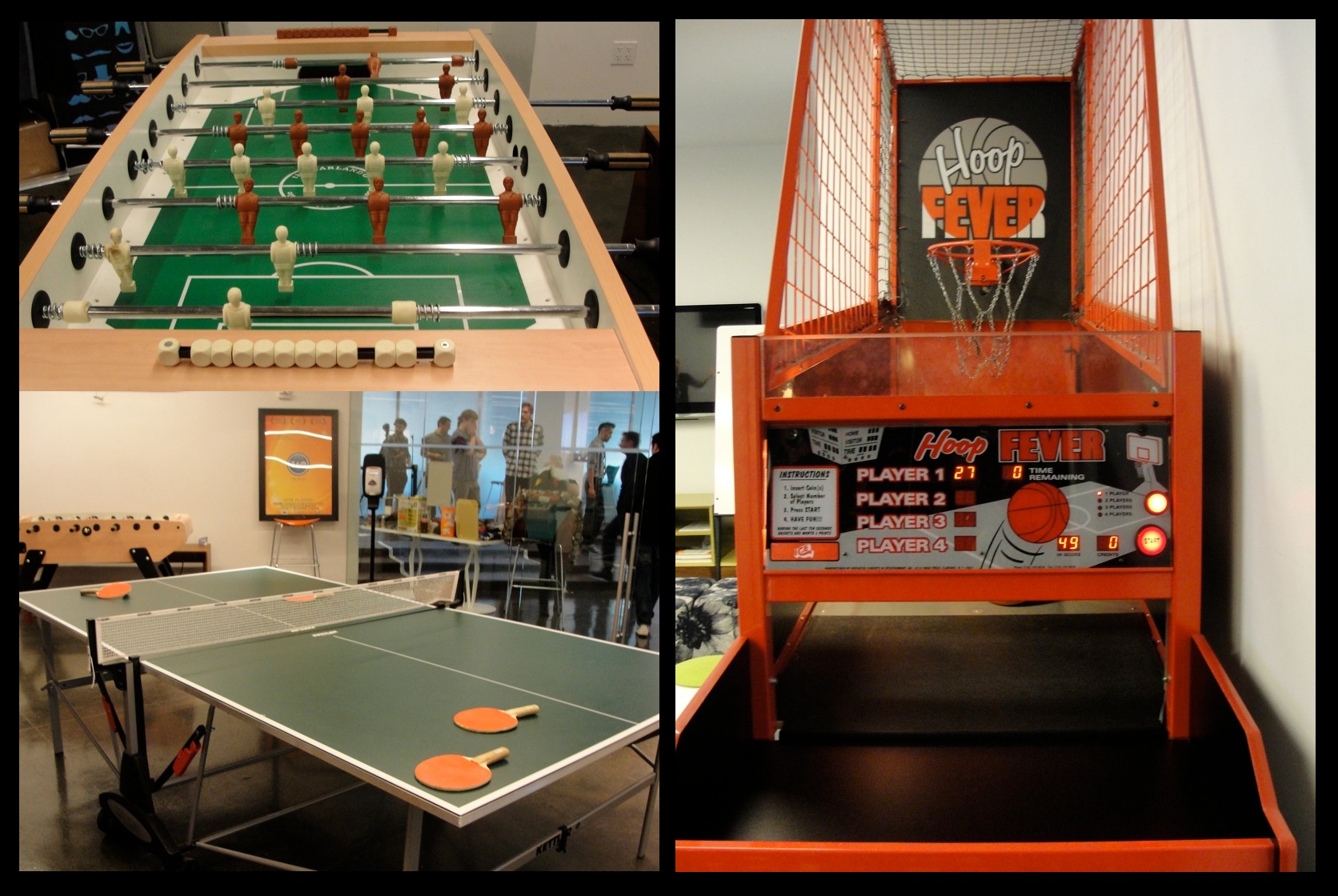 (Games room, complete with basketball game, foosball table, and customary agency ping-pong table.)
“Unfortunately the basketball proved loud for the people on the other side of the wall there, so we try to use it outside of work hours now.”