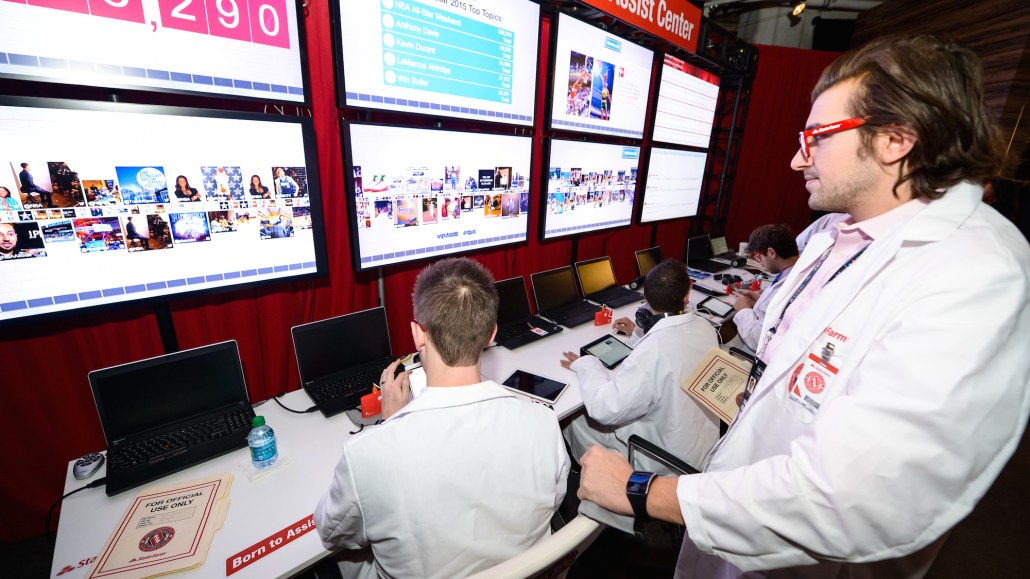 The NBA All-Star Game came back to New York City this past weekend for the first time since 1998. And like a good neighbor, State Farm was front and center with an assist. The insurance giant extended its basketball-focused partnership with the NBA by launching a social media hub and digital campaign this past weekend to literally help out All-Star Weekend attendees.

State Farm set up a physical social media command center inside the NBA House at Moynihan Station with the help of agency Translation. Together they launched the Twitter handle @SFNBA to assist attendees on a wide range of topics: from which trains to get around town, to how many songs Ariana Grande would sing. To get an assist, attendees merely had to send a tweet to the hashtag #AllStarAssist, and the command center would respond.

@NBA @SFNBA how much songs will @ArianaGrande sing tonight? #AllStarAssist

The command center was a real-life extension of the brand’s popular “National Bureau of Assists” commercials, in which NBA point guards Chris Paul, John Stockton, Sue Bird, Damian Lillard and Stephen Curry play their non-athletic “twins,” who help people through mishaps off the court. The “Born to Assist” campaign has been running for three years now. The most recent spot, “Best of the Assist,” was released last December.

The real-life State Farm squad from last weekend were dressed to match the ballers in the ad. “As such, everyone was outfitted in argyle, lab coats and red glasses just like our SFNBA members are in our TV Spots,” Casey Savio, senior digital and social media strategy at Translation, told Digiday. “We even had a lounge and charging station with argyle pillows so that people could relax after they were done assisting or get recharged.”

The #AllStarAssist center was built to look just like the State Farm National Bureau of Assists Headquarters that appeared in the recent “Best of the Assist” spot. It was in full view at the NBA House, outfitted with clear panels so that people could watch a five-member team assisting basketball fans in real-time. The team managed the center and the @SFNBA Twitter handle around the clock, answering people who tweeted at them by directing them to key venues, public transit and local attractions.

The athletes involved with the campaign promoted it on Twitter too.

The center had six large screens installed, featuring a hashtag counter and a rolling tracker of the real-time conversations people had with the handle @SFNBA. Representatives from State Farm and Translation oversaw the team, and switched shifts throughout the weekend. In addition to assisting people digitally by replying to tweets, 175 State Farm City Assisters were also on ground, assisting attendees in-person all over New York City — delivering CP3 shoes, promotional merchandise and other items to help battle the cold NYC weather.

“If you think about one of our main marketing objectives and our brand mission, it is the idea that State Farm is here to help,” Patty Morris, State Farm’s marketing director of brand content, told Digiday. “The campaign that we run specifically for the NBA is all about bringing out the parallels between assisting both on the court and off the court. So All-Star Weekend was the perfect opportunity to put that into action.”

According to Translation, the integrated campaign fared well, with the 250 tweets sent out by @SFNBA generating over 5,000 engagements. The agency’s analytics also reported receiving over 3,600 tweets at the hashtag #AllstarAssist and the @SFNBA. According to social analytics firm Topsy, the hashtag #AllStarAssist had over 1,800 tweets over the weekend.