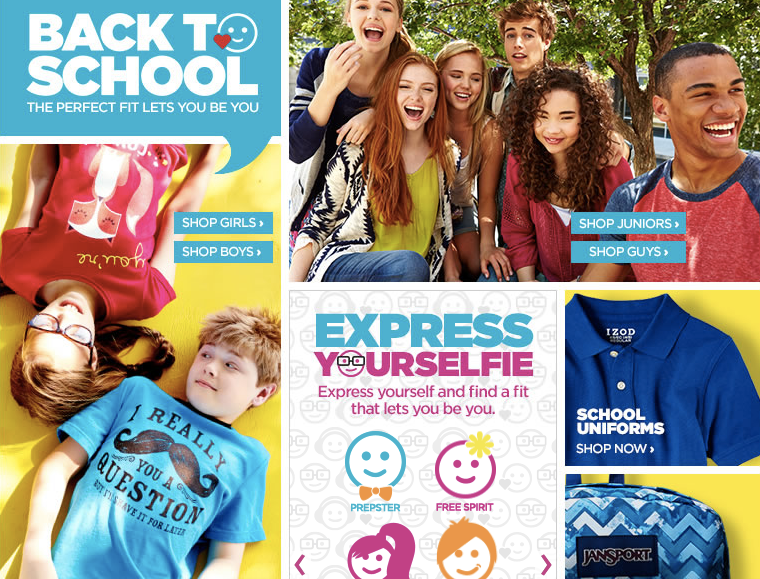 There may be nothing sadder than going back to school at the end of a glorious summer — except, maybe, being marketed to in the process. JCPenny is doing its part, at least, to inject a little levity into the proceedings.

The retailer is targeting both kids and their moms in its back-to-school campaign, which is leveraging on both emojis and selfies as a part of its digital component to engage with its customers. Hey, “selfie” was added to the online Oxford English Dictionary earlier this year, so it’s a totally scholastic campaign.

The multipronged campaign has gone on the past month, built around celebrating self-expression. It kicked off with two television spots, “Stand Out” and “My Fit,” as well as a Hispanic marketing spot apart from an interactive digital campaign on its online microsite called “Express Yourselfie” and a campaign targeting the moms called “That’s My Kid.”

Express Yourselfie churns out emojis, personalized from the pictures that students upload — a kind of a graphic smiley face that is generated to resemble them. These emojis can also be customized, choosing from a variety of hairstyles and accessories. Users can also share their emojis both online and on a gallery on the microsite. JCPenney also curates a suggestion of clothing items for users to consider depending upon the personality of their emojis.

The hashtag #JCPExpressYourSelfie is being used to promote this campaign on social platforms and has been mentioned just over 300 times in the past month, according to Topsy.

The retailer is having a little more success with the pitch to moms. Not only does it have a special deal for attracting them — a$25-worth-mini-makeover deal called “Just For Mom,” valid until Sept. 6 — but there is also a campaign encouraging their own online participation.

Through the “That’s MyKid” campaign, JCPenney is encouraging mothers to share their children’s pictures with the hashtag, #ThatsMyKid. JCPenny then highlights those photos on their own sites. The hashtag has gathered a lot more traction than Express Yourselfie, having been mentioned nearly 4,000 times in the past month, according to Topsy.

“Moms are just as much a part of shopping experience and as active on these platforms as the kids,” said Kate Coultas, senior manager of media relations and corporate affairs.

The third component of this campaign is a philanthropic one, in which JCPenney is inviting customers to round up their purchases to the nearest whole dollar and donate the difference to JCPenney Cares to help fund national and local programs supporting arts in education. According to Coultas, more than $500,000 has already been raised.

As for the early back-to-school launch, Coultas said that the brand did not want to miss out being in people’s minds even before they started shopping for school — and that this kind of an interactive campaign was perfect to keep them interested.

“It is not only a great branding opportunity,” she said, “but also a great engagement opportunity.” But so far it doesn’t look like everyone wants to be the teacher’s pet quite so early in the year.