In-house may have a silver lining for agencies: Insights from the Digiday Media Buying Summit

These are difficult times for agencies. They are dealing with a raft of business model challenges and new competition from consultancies — and their own clients taking more of their marketing functions in-house. On top of that, agency staffers say they’re increasingly overworked and underpaid, and many are looking for roles at clients, consultancies and technology firms instead.

Agency executives gathered in Nashville on Feb. 20 – 22 to discuss these issues and more. Here’s what attendees learned:

In-house may have a silver lining
The in-house trend is real, whether agencies like it or not. It remains to be seen if most clients can successfully and sustainably handle functions such as media planning and buying themselves, but attendees agreed that a growing number are going to try regardless. That doesn’t mean the in-house movement is all doom and gloom for agencies, however. Instead of fighting it, many attendees said they’ve seen some success in embracing the shift and adapting their approaches to capitalize on new opportunities and client needs instead.

The bottom line: In housing may not mean the end of agencies, but it means a different type. Agencies should be mindful of how they’re positioning themselves to clients.

It’s time to be sensible about brand safety
Brand safety was a recurring theme throughout the summit, helped along by the fact that news of YouTube’s latest crisis around its comments section broke on the first day. While attendees acknowledged that clients are increasingly concerned about the content surrounding their ads and ensuring their brands aren’t popping up in newspaper headlines, most also called for more sensible expectations. Yes, platforms could be doing more to police the quality of the content in their networks, but it’s also impossible to guarantee complete safety. And the reality is that marketers need to be comfortable with that.

The bottom line: Agencies are thinking more pragmatically about brand safety. Discussions have moved on from the idea of zero-tolerance and are now centering more around levels of risk.

News is bad news for many advertisers
Closely linked to the notion of brand safety, attendees also debated the merits and risks of advertising alongside news. The rise of “fake news”, divisive politics and a steady drumbeat of press coverage around subjects such as data privacy and online tracking is making some advertisers avoid buying ads next to news-related content altogether, much to the chagrin of publishers.

The bottom line: Depending on the client, advertising alongside news content could present an unnecessary risk or great opportunity. Either way, it shouldn’t be dismissed simply because it can be challenging to work with.

Data privacy is a headache, but an opportunity
Growing scrutiny of online ad practices and increased legislation both in Europe and the U.S. around data privacy and protection is causing a headache for everyone across the digital media ecosystem. It’s no different for agencies, but the good news is that clients are equally as confused. Rachel Glasser, chief privacy officer at Wunderman said clients are taking a growing interest in the matter. Her key points:

The bottom line: Data privacy is messy and difficult, but that’s precisely why agencies are well-positioned to help clients navigate it.

Overheard
“The bigger picture for all of us is this is inevitable when you digitize an ecosystem and commoditize its building blocks. Buyers are commoditized. As agencies, we need to look at the fact that buying inherently isn’t an advantage for us.” – Anonymous agency executive.

“If your career is buying and placing media and you’re starting out, you should rapidly look for some other skills to add to your resume.” – Anonymous agency executive.

“Is there even any data showing if consumers see an ad near a piece of [unsavory] content that they’re making a negative connection?” – Anonymous agency executive.

“There’s times when you see entry-level agency salaries and you wonder how people survive. The downside of that is in diversity, because you have to have mommy and daddy help you out.” – Anonymous agency executive.

“My team works mostly in social, and the biggest thing for us is Facebook is making it easier for people to take it in-house.” – Anonymous agency executive. 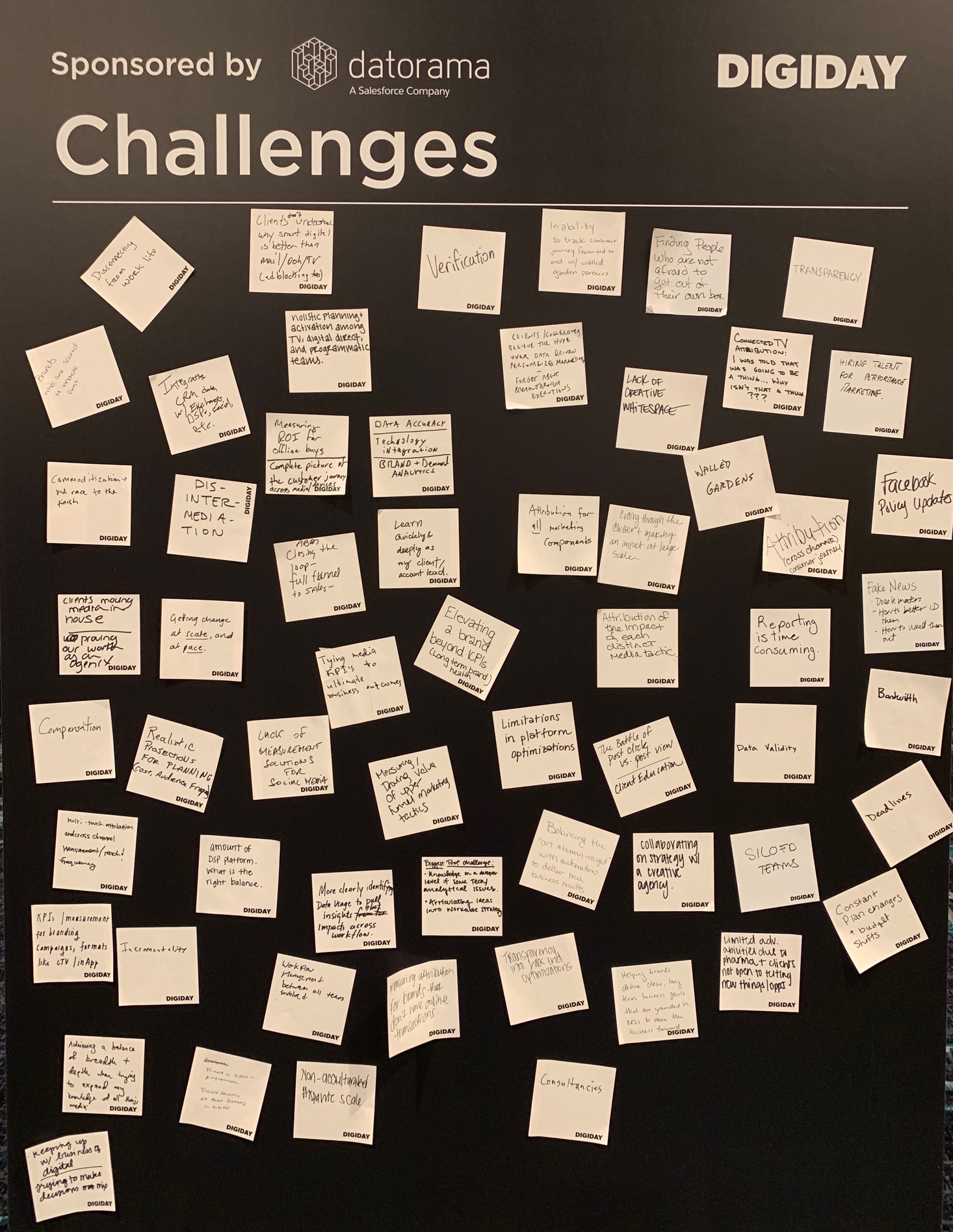