Imma let you finish, but this French designer-Kanye collab is not a good look 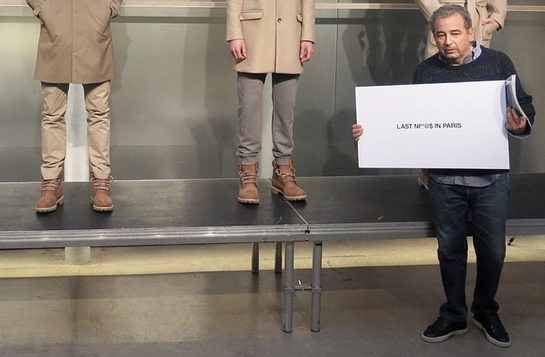 A French luxury retailer has learned the hard way that just because Kanye West thinks you’re cool, it doesn’t mean anyone else does.

French designer Jean Touitou issued an apology Thursday for having recently named a line of his clothing after a song West recorded with Jay-Z. The problem? The song’s title, “Niggas in Paris,” struck an overwhelming number of people as a deeply offensive name for a line of clothes, regardless of how chic.

Touitou, who is white (and French), apologized Thursday for speaking “recklessly using terms that were both ignorant and offensive” and for his “poor choice of words,” issuing a statement that can be found on his Twitter profile.

Still, it may be a case of too little, too late. Touitou is the founder and creative director for a clothing label called A.P.C., known for its minimalist separates. He has released two collaborative collections with West in the past, most recently for a fall/winter ’14 line.

But Touitou may have overestimated the protection his association with Kanye has granted him. According to a report from Style.com, while presenting his fall/winter 2015 collection earlier this week the designer held up a sign that read “LAST NI##@$ IN PARIS.”

Asked to clarify, Touitou later explained in an email that read:

One hip-hop song is called ‘N****s in Paris.’ One movie is called Last Tango in Paris. I made looks which are a cross-over of those two references: the Timberland shoes and the sweat pants are iconic of hip-hop, and the camel hair color coat, worn with nothing under it, is iconic of that precise movie. I am friends with Kanye, and he and I presented a joint collection at the same place, one year ago, and that this thing is only a homage to our friendship. As a matter of fact, when I came up with this idea, I wrote to him, with the picture of the look and the name I was giving to it, and he wrote back immediately saying something like, ‘I love this vibe.’

The fallout online was as furious as it was fast. Timberland issued a statement from the company’s president Wednesday saying that it was severing ties with A.P.C.

“We have chosen to immediately terminate our involvement with the A.P.C. brand, including the footwear collaboration we had planned for this fall,” the statement read. “Simply stated, this kind of language and approach is in complete contrast with our values … We will not tolerate offensive language or racial slurs of any kind being associated with the Timberland brand.”

A.P.C. did not return requests for a comment, and it is possible that the racial insensitivity of the designer was merely a question of cultural ignorance. But since January 27, social analytics firm Brandwatch reported seeing more than 3,500 mentions of the incident, and have seen six times more negative mentions than positive of the incident.

I think i might be done wit Kanye after this APC stuff. He wants to be accepted in the fashion industry so bad hes willing to shuck and jive — #GymFlow Rodriguez (@AugustCulture) January 29, 2015

Many of the mentions made note of the Timberland news (2,700 mentions). And while sentiment tended to be negative towards A.P.C. and West, there were many more positive mentions about Timberland severing ties with the designer.

Kanye West, who appeared on Ellen DeGeneres’ talk show Thursday to promote his new album, didn’t bring up the episode. But almost 20 percent of Twitter users discussing the event made note that Kanye West “approves” or “approved” the name of the line.