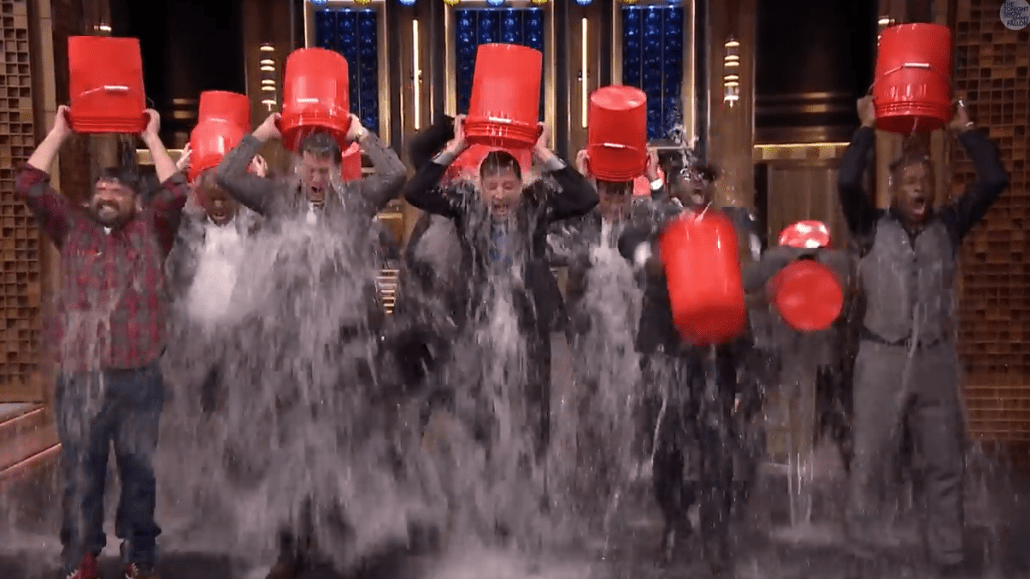 Chances are if you’ve spent any time on social media in past couple of weeks, you’ve seen some of your friends dump a bucket of ice water over their heads. Maybe you’ve even seen a Kennedy do it. Or the New York Jets. Or Martha Stewart. Or Justin Timberlake.

Maybe you’ve taken the “Ice Bucket Challenge” yourself. If you have, you’ve done your part to raise awareness for amyotrophic lateral sclerosis, or ALS (commonly known as Lou Gehrig’s disease). In the process, you’ve taken part of an explosively viral grassroots marketing campaign for a good cause.

You’ve also provided experiential marketers with a case study on how to do their jobs better.

Here’s how it works: Someone who wants to participate (or has been “challenged” via social media by a friend) simply films themselves dumping a bucket of ice water on their head. It’s evocative of those celebratory Super Bowl moments, where a coach gets drenched. But in this case, it’s personal. The dunkee then challenges a friend to do the same in the name of ALS, within 24 hours, and/or donate to the cause.

“People want to do something for the world. They want to contribute, but they want it to be easy,” said Christine Outram, vp, invention director at DeutschLA. “It’s slacktivism: having something that makes you feel good but isn’t too hard to accomplish.”

The viral challenge actually kicked off a few months ago, when Pete Frates, a 29-year-old Massachusetts resident diagnosed with ALS, started posting about it on social media with his father’s help. It really gained traction, however, 10 days ago when friends and family of the former Boston College baseball player used it to raise awareness about his plight.

Frates was diagnosed with the neurodegenerative disease, which has no cure, in 2012. He is now paralyzed, eats through a feeding tube and cannot talk.

Last Thursday, Frates’ parents, Nancy and John Frates, were joined by 200 Bostonians who doused themselves in Copley Square, making the local news — and, eventually, national headlines.

200 Bostonians do the #IceBucketChallenge and challenge NYC, Chicago, and LA!! https://t.co/m4agtxteHZ

“There’s some real mythic elements to this that tap into an American psyche,” said David Slayden, founder and executive director of BDW. There’s a young man cut down in the prime of his life, with a disease associated with another, more famous baseball player. There’s baseball itself. There’s the thrill of completing a challenge.

Then there’s the power celebrity that tips it onto the national stage: The campaign peaked two days ago when Ethel Kennedy nominated President Obama for the challenge. Obama declined to accept the challenge, opting instead to donate money to the cause.

But that’s hardly dissuading anyone else from doing it. There have been more than 71,000 mentions online in the last 7 days — a number that was growing at an hourly rate of 3,000 as of Wednesday afternoon, according to a spokeswoman from the social media monitoring company Brandwatch.

“It’s a gigantic word-of-mouth,” said Slayden. “The participatory nature of it is promotional on top of that. These are some old, pre-digital techniques that they’ve optimized through the power of digital distribution.”

“It certainly amazing to see how far and wide the campaign continues to spread, increasing both awareness and funds,” said Lora Lewis, a spokeswoman for social media analytics firm Crimson Hexagon. “Since the middle of July, there have been more than 307,600 posts on Twitter and public Facebook pages.”

The volume of tweets that include the #icebucketchallenge hashtag over the month of August has surged over the past 10 days, peaking at 90,000 on the 11th before tapering off: 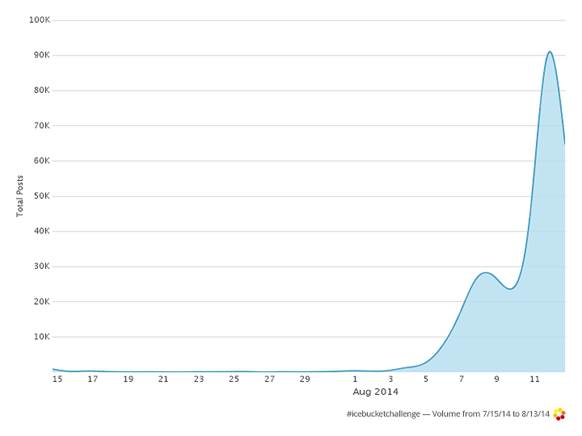 Beyond awareness, the campaign has raised something a little more tangible: money. The ALS Association, for example, has raised $5.7 million since July 29 across all chapters, according chief communication officer Carrie Munk. That’s compared to just $1.2 million during the same period last year. In the process, she said, she learned something about viral experiential marketing — and, sorry marketers, it’s doubtful it would have resonated so strongly if a big brand were behind it.

“One of the reasons it’s been so successful is that it started organically, with one individual and his family. It’s been tremendous to see the outpouring of support,” she said. “It exploded beyond our wildest dreams.”

That money came from more than 100,000 new donors, all of whom the ALSA now has on file for future campaigns, according to Munk. Still, she is well aware that the ice bucket challenge is a lighting-in-the-bottle fluke, a lucky one-shot deal for the ALSA.

“I don’t think it’s we can replicate again in the future, so we’re enjoying the moment and trying to do what we can to really engage people,” she said. “Then we’ll look toward the future to see how we move things forward.”