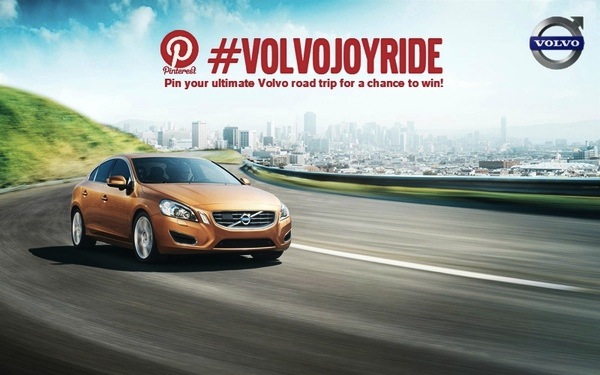 Pinterest is gaining steam with a large, mostly female audience. The allure, along with apps like Instagram, is part of what some are terming social media’s new “visual phase.” People can express themselves through photos, original or not.

For brands that leaves a dilemma of how to ingratiate themselves into this type of visual social media. For luxury brands like Burberry, the task is easier, considering users are already sharing photos of their products. For Volvo, however, it meant going beyond standard vehicle shots and instead striking a deal with popular blogger/pinner Victoria Smith as part of a “Volvo Joyride” campaign.

Smith set off on a road trip, which Volve and social agency Cake Group filmed. She shared her pins from the trip and reasons for sharing them. It is meant to promote a contest that  lets people create a pinboard of their ultimate road-trip experiences, through Sept. 26. Pinterest users are able to pin every aspect of their trips, from their outfits to their destinations to stops along the way — and even their music playlist. To enter, consumers must re-pin one of the #Volvo #S60 images from Volvo’s dedicated pinboard into their boards. Users are asked to promote the S60, and a winner will be chosen to receive a paid road trip.

“Pinterest is a neat way to get people to promote your products in a non-direct way, and it’s still direct, if you know what I mean,” said Joe Barbagallo, social media manager at Volvo. “It’s not like you are saying, ‘Here’s my product.’ Instead, it’s about situations that pinners can relate to, where the Volvo brand is relevant.”

The campaign launched on Sept. 5, when Volvo had just 155 followers on Pinterest. Volvo is promoting the contest on its website and via Twitter and Facebook. In just over a week, its follower count has reached more than 600. Those are hardly earth-shattering numbers, but Volvo’s only been involved in Pinterest for two months. Ultimately it wants to see if Pinterest can drive leads back to the Volvo site. It is optimistic enough on Pinterest to dedicate one of its three community managers to the platform fulltime and plans to earmark 50 percent of its social efforts to the platform.

“We’ll be focusing our efforts over the next six to 12 months on figuring out Pinterest,” Barbagallo said. “I envision our presence there to be a way to highlight the way our vehicles embody the notion of design. We’re also aiming to change the brand’s perception and to grow our Pinterest audience.”