Brands like to talk a big game about acting in real time. But the truth of the matter is, they struggle mightily with the fast-moving digital world.

Mondelez brand Oreo, however, proved it gets the speed of digital culture. When the lights at the Superdome went out for nearly a half hour during the third quarter of the game, Oreo and its agencies 360i and MediaVest thought fast and quickly tweeted out “Power out? No problem.” with a photo of an Oreo with “You can still dunk in the dark” copy. The tweet was retweeted over 12,600 times. It was favorited nearly 4,000 times. On Facebook, where Oreo has 31 million likes, the photo has garnered over 19,000 likes and 6,500 shares. 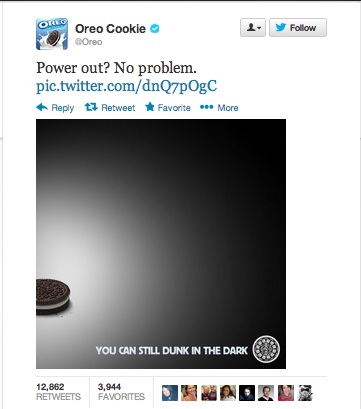 The timing of the post couldn’t be better, coming when there wasn’t anything happening on TV, even commercials, and many people’s attention was tuned to social media.

“We set up mission control comprised of 360i-ers, the brand team and MediaVest, so everyone was ready to create content and optimize in real time,” said 360i president Sarah Hoffstetter. “Once the power went out, the team immediately recognized an opportunity and created the image and caption.”

The key to having it done: the agency creative and strategy teams were all together at the 360i offices in New York. The presence of the client meant being able to get quick approval.

“It was amazing to have the clients in the room,” said Hoffstetter. “They are both brave and attuned to the need of real-time response to be successful in today’s media environment.”

The added bonus of the move was the cost. Other than pizza to keep the team fueled, the creative effort cost approximately $4 million less than the price of airing a TV spot.

360i is still collecting data on what kind of longer-term bump the tweet gave the brand. The risk is these things fizzle quickly. But there’s little doubt other brands could stand to take a lesson of how to move quickly.

Oreo ran a commercial during the first quarter featuring a “whisper fight” over whether the cookie or the creme is the best part. The spot included a call to action for viewers to go to Instagram. The move increased Oreo’s following there from about 2,200 prior to the game to over 35,000.