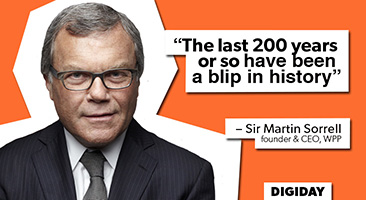 Between the wrapping and unwrapping of presents, you might be looking forward to finally getting time to do some reading this holiday. Looking for a little inspiration? We polled the media and agency landscape for book recommendations. Top execs from Arianna Huffington to Sir Martin Sorrell shared their season’s readings:

“Meditations” by Marcus Aurelius
“The book is not very Christmas-y, on the surface, but as we prepare to end one year and begin another, his wisdom on our need for renewal seems appropriate to the season. ‘People look for retreats in themselves, in the country, by the coast, or in the hills,’ he wrote. ‘There is nowhere that a person can find a more peaceful and trouble-free retreat than in his own mind… So constantly give yourself this retreat, and renew yourself’.” — Arianna Huffington, president & editor-in-chief, The Huffington Post Media Group

“An Officer and A Spy” by Robert Harris
“At the moment, I’m reading this brilliant retelling of the Dreyfus Affair –- the notorious incident that many people know of but few know very much about — that marked French society at the end of the 19th century. As much thriller as historical account, the author somehow manages to make this well-known story into a page-turner. A worthy winner of the Walter Scott Prize for Historical Fiction 2014 and a potentially great fit for anyone’s Christmas stocking this year”. — Nick Baughan, CEO, Maxus U.K.

“Empress Dowager Cixi” by Jung Chang
“It proves that, as some Chinese believe, the last 200 years or so have been a blip in history. It also proves why gender equality could be very productive!” — Sir Martin Sorrell, founder and CEO of WPP.

“Countdown to Zero Day” by Kim Zetter
“This is a spellbinding journey into the Stuxnet virus attack on Iran’s nuclear program. After the Sony attack has put cyber warfare on the map, it’s essential reading for any of us.” — Bruce Daisley, managing director, Twitter UK.

“Digitizing Government” by Alan Brown, Mark Thompson and Jerry Fishenden
“I’m looking forward to reading this over Christmas. I have long held a belief that much of the real innovation with how technology can transform what we do is being done within the public sector, I’m hopeful that this book might start to unpack why that is true and what we can learn and apply in other sectors. The most important books of 2014 for me were “The Second Machine Age” and “Big Data”. Both were profoundly important for me as I was writing my own book around the future of our relationship with technology.” — Dave Coplin, chief envisioning officer, Microsoft U.K.

“It explains how our implicit, intuitive System 1 brain processes run riot over our lazy but rational System 2 mode of reasoning for most of our everyday thoughts and behavior. Genuinely illuminating read which manages to bring ‘high-end’ psychology to the masses. Also probably quite enlightening after the indulgences of Christmas and thought provoking when we’re writing those New Year Resolution lists.” — Alison Tsang, head of insight, Manning Gottlieb OMD.

“The Hard Thing About Hard Things” by Ben Horowitz
“He’s brilliant. I recently finished ‘Zero to One’ by Peter Thiel and highly recommend it. I just bought ‘Thinking, Fast and Slow’ but haven’t started it yet.” — Jason Seiken, chief content officer, Telegraph Media Group.

“Where Does It Hurt?” by Jonathan Bush
“This book calls for entrepreneurs and digital technologists to revolutionize our healthcare systems. In addition, I can highly recommend ‘Thinking, Fast and Slow’ by Daniel Kahneman, which is an excellent book to cause reflection for people like me who run with intuition, rush with gut instinct and dash with creative concepts. It’s a book worth sticking with, as learning to think more slowly is a very useful skill.” — ‎Mary Keane-Dawson, CEO, myHealthPal.

“Colorless Tsukuru Tazaki and His Years of Pilgrimage” by Haruki Murakami
“Murakami is hands-down my favorite modern novelist. His style is truly unique, a kind of Japanese Gabriel García Márquez—hypnotic magical realism in a contemporary setting. All of his novels are mostly the same in core plot: An anti-hero protagonist finds him or herself trying to solve a mystery that’s closely tied to personal tragedy and has very mystical, alternate dimension-type experiences along the way. My mind never wanders once when I read Murakami (this is unusual, believe me) and I could sit and read him 24 hours straight. In fact, I probably will.

As well as “The Peripheral” by William Gibson. Gibson is another lifelong favorite author. He’s branched out in the last few years from strict sci-fi into writing about modern media culture — his most recent series of novels, “Pattern Recognition,” “Zero History” and “Spook Country” are probably the best books I’ve ever read on the subject. Way more insightful than any business marketing book you will ever read, in my opinion. This new one is apparently in the same vein, featuring nanotech, time travel, gaming culture and the overall decline of Western Civilization thanks to technology. — Rachel Pasqua, practice lead, mobile, MEC North America