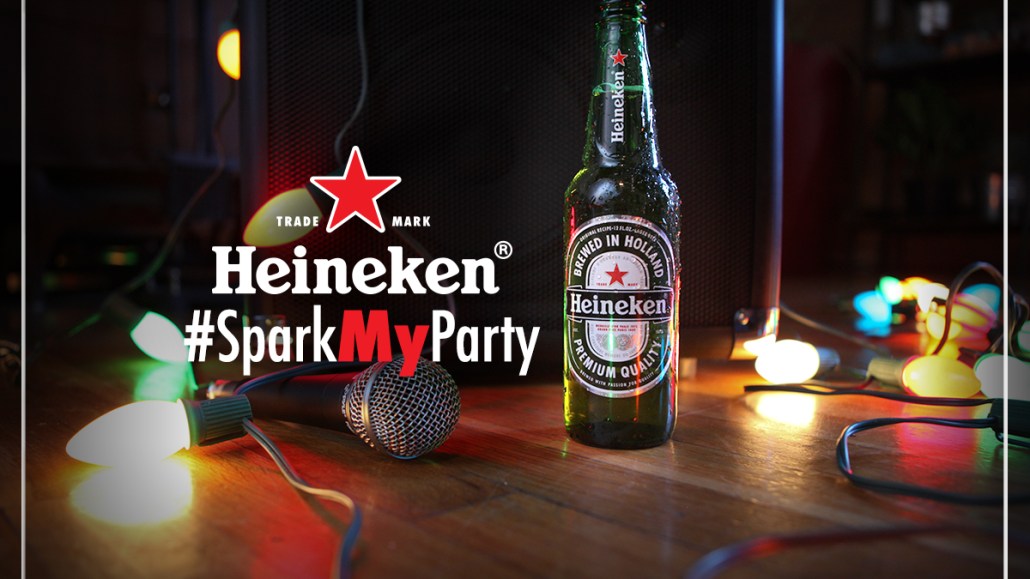 Heineken wants to take your holiday celebrations to the next level. The lager maker unveiled its holiday campaign “Spark My Party” yesterday, asking its fans to tweet the hashtag #SparkmyParty to its Twitter handle, for a chance to win free goodies for their holiday parties this weekend.

Calling all New Yorkers! Tweet #SparkMyParty to @Heineken_US this weekend for a chance to win a boost to your party! pic.twitter.com/Oe25m4vkLE

Lucky winners might be surprised with a real-life party makeover, with Heineken ushering in a live DJ, a roomful of balloons, an event photographer and even Uber gift cards to ensure that their guests get home safe this weekend.

“We know that the holiday season is an important time for people to reconnect with friends and family,” Priscilla Dohnert, the brand director of Heineken USA, told Digiday. “We wanted to figure out a way to make these occasions better in a fun, unexpected way by surprising people in real-time and giving them some spark.”

But the party is not just limited to New York City. People across the country can join in on the holiday action, and win their own #SparkMyParty experience. Heineken is partnering with lifestyle media company UrbanDaddy to take the party to eight other cities, including Los Angeles, Miami, Chicago, San Francisco, Atlanta, Houston, Philadelphia and Boston. In the campaign’s first 24 hours, the hashtag had been tweeted nearly 300 times, according to social media analytics firm Topsy.

#SparkMyParty is an extension of Heineken’s global campaign, Spark Your Holidays, which launched November 10, and had a TV spot titled “Imagine,” as its face. The campaign will continue throughout the holiday season with seasonal packaging, promotional offers, as well as other digital and social features on its website.

Heineken has been on a run lately. It was recently announced as the winner of 2015’s creative marketer of the year award at the Cannes Lions International Festival of Creativity. Included in its kitty this year is Heineken brand Newcastle Brown Ale’s “If We Made it” campaign, which made fun of itself for not being able to afford a Super Bowl ad. Another was a campaign for its drinks Desperados and Dos-a-rita, which used location-based targeting, specific times and relevant social platforms to increase its ad sales among millennials—increasing brand recognition by 23 percent and sales by 29 percent respectively.

Mobile was a key driver in these campaigns, and Amram thinks the trend will continue for #SparkMyParty.

“In the past two years, we’ve done a lot of learning, and across our campaigns, mobile has a lens,” Amram said. “Mobile lets you scale your messaging, adds depth of conversation and also lets you use that single most important point when people are actually buying.”