Hashtag Generator Takes You Inside the Weird World of Hashtags 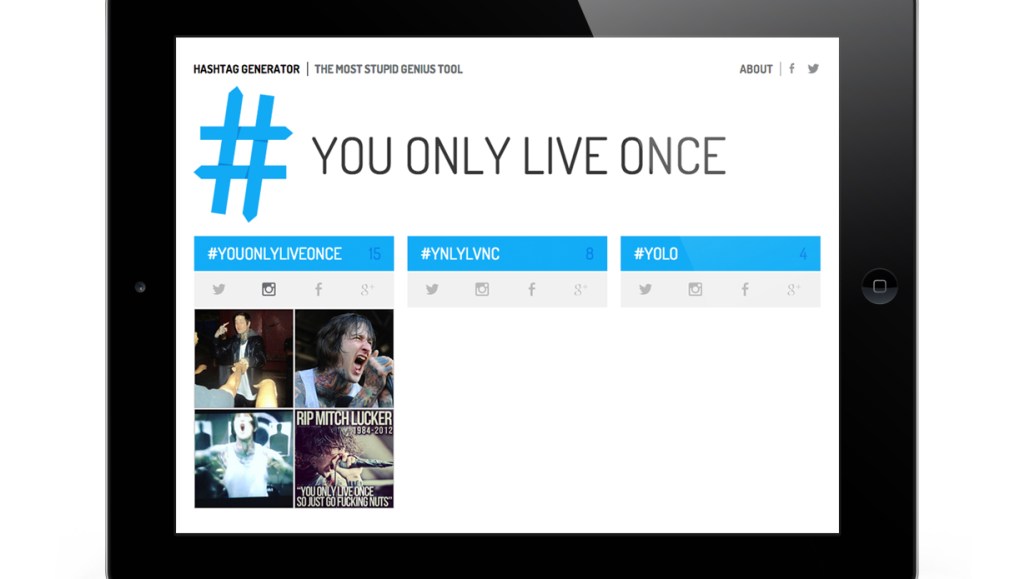 Thinking about using a hashtag on Twitter? Before you tweet out that pound sign with some phrase or word attached to it, you may want to see what the Hashtag Generator pulls up.

The Hashtag Generator is a fun little Web tool from a group of creatives and developer dudes who all love making things for the Internets: Leif Abraham, creative director of product experience at West, Damjan Pita, senior creative at AKQA NY, and Alex Milde and Roman Opalko who are both developers at German shop Finekost.

The Hashtag Generator is simple. You type in a sentence or phrase and the generator will pull up three different possible hashtags.

“One hashtag is just the sentence without any spaces, one without vowels and one with just the first letters of each word,” explained Pita. “You can see right away if the hashtag is already in use on certain social networks and for what kind of content it’s being used right now.”

This could be a useful tool for brand social media managers or digital strategists who are trying come up with a hashtag for a campaign and want to take the temperature of certain social media conversations and to see how certain hashtags are being used. Or anyone can just mess around with it and see what kind of random things people actually create hashtags for.

Digiday asked Abraham and Pita a few quick questions about the Hashtag Generator, whether the hashtag is overused of hasthags, and what digital trends they are watching. Some excerpts:

How did you guys come up with this idea for the Hashtag Generator?
Abraham: We are just constantly bouncing ideas back and forth. Some of them are just quick, fun things like Hashtag Generator and but some are also more serious tools. Like Pay with a Tweet, which was originally created with my old pal Christian Behrendt, that turned into a business used by millions of people including Microsoft, every major record label and Mitt Romney, during the presidential election. It’s now run by a venture firm out of Hamburg, Germany.

What do you make of the ubiquity of hasthags?
Pita: There is a funny love/hate relationship with hashtags going on. On the one side they can be a really useful tool to group conversations about a certain topic, on the other side people started using them as an expression of literally any kind of feelings and information in their posts on social media. Jimmy Fallon had a nice sketch about that the other day.

Abraham: This is where Hashtag Generator plays in, we are just making fun of the overuse of hashtags on social media, with a tools that turns any expression, or sentence, into different hashtags.

What is the worst way people and brands use hashtags?
Pita: Well, you definitely see often a random hashtag at the end of some car commercial without any context. Hashtags can be great way to create conversation around events for example but as a brand, if you don’t add any context to your hashtag, it just does not serve any purpose. A really nice way to use hashtags is, for example, you buy things via hashtags.

What’s the coolest thing you’ve seen on the Web lately?
Pita: This:

Any digital trends you’re keeping an eye on?
Abraham: It’s interesting to see how many ad agencies are trying to get into product innovation but often their process, even though it can create a product, is not set up to maintain and that’s why we don’t see any successful products from ad agencies. Often it’s easier to create products outside of the agency environment, as it’s not just about creating a product but starting a company.