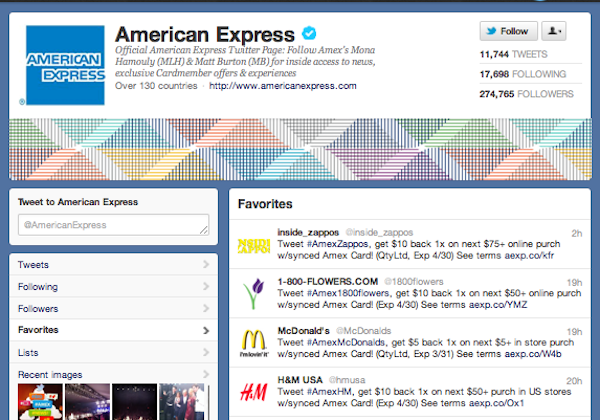 American Express’ launch of a new experience for card members using Twitter may be a sign of what is in store for the future of hashtag marketing. Up until now, hashtag marketing was nothing more than lame incentives to get people to tweet hashtags. This new development by American Express may change the world of deals and offers as we know it.

American Express is letting card members sync their cards with Twitter at http://sync.americanexpress.com/twitter, and when they tweet using special-offer hashtags, savings are loaded directly to their cards. It looks like this could be quite the craze, with retailers such as 1-800-Flowers, Best Buy, Century 21 Department Store, The Cheesecake Factory, Dell, FedEx Office, FTD, Gulf, H&M, McDonald’s, Seamless.com, Sports Authority, Ticketmaster, Virgin America, Whole Foods Market and Zappos.com already on board. This new experience is facilitated by American Express’ Smart Offer APIs, which make it possible for retailers to get detailed reporting about the online and offline spending behavior of their customers. All of the current offers can be viewed at https://twitter.com/#!/AmericanExpress/favorites.

“No more coupons,” said Elizabeth Rutledge, evp of global network marketing and information at American Express. “No more showing your phone to a cashier to receive a discount. No more wondering if that offer your business served up in a digital application actually delivered increased business. It’s the equivalent of embedding a coupon in your card. In digital, and especially in mobile, the simplicity and non-clunkiness of the user experience is key.”

This might make the old knock on social marketing lacking ROI a thing of the past. The downside: Do Twitter users really want to be bombarded by people clamoring for discounts?

“This is a smart play, since Twitter needs to monetize itself, while American Express certainly wants to encourage more credit card sales at their retailer accounts that provide their commissions,” said Wilson Kerr, vp of business development at Unbound Commerce. “But what about the potential for a campaign-damaging downside if Twitter streams are sullied via overtly commercial chatter that does more long-term harm than good?”

The effort resembles one American Express did with Foursquare that gave refunds for checking in at participating businesses and using an AmEx card.

Although the other credit card giants have not rolled out services like the one American Express has launched with Twitter, the financial giants seem to be focusing their efforts on bringing cardholders extra savings. For example, in Nov. 2011, Gap partnered with Visa to give consumers personalized, real-time SMS offers at Gap, Banana Republic and Old Navy stores. Consumers have to opt-in to the service to get discounts when transactions are made via their Visa credit cards.