From skivvies to gluttony: Your guide to the Super Bowl sideshows 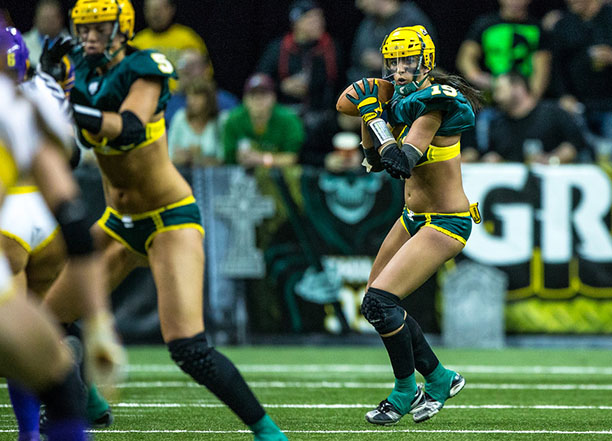 The Super Bowl is by far the biggest game in town on Feb. 1, but it is far from the only game. There will be plenty of other contests competing for your attention that Sunday: From puppy bowls to lingerie smackdowns, there has emerged a cottage industry of Super Bowl sideshows that are gentler on advertiser wallets but still draw plenty of eyeballs.

Reifenheiser said that the rise of what he dubs the “choice economy” means that people who aren’t necessarily into football have other ways to get their media fix — that can include watching YouTube stars instead of Katy Perry during the just-announced YouTube halftime show, or puppies (or fish, or kittens) playing their own version of football during assorted “Bowls.” “It’s just a unique day,” he said. “It’s bizarro day where media consumption is celebrated.”

Lesley Pinckney, vp of digital and social at Walton Isaacson, which is running its first Super Bowl commercial for Lexus next Sunday, said that it’s a function of how crowded the ad field has gotten on game day. “The media companies like YouTube and Animal Planet are smart about creating a subdefinition that lets advertisers own something that isn’t overrun with logos,” she said.

“If you watch the Super Bowl, maybe you don’t know who the auto advertisers are because every pod has an auto spot.” There are brands that don’t have a yearlong NFL sponsorship and only appear during the Super Bowl, so they may miss out on awareness. “What I’m surprised about is nobody has gone for a counter program more targeted for the women who don’t watch football,” she said. “There is a huge opportunity to run something different that isn’t sports related.”

So if your brand or agency doesn’t want to drop $4.5 million on 30 seconds of airtime but still wants some of that Big Game buzz, here are some Super Bowl sideshows to consider.

The uncontested big dog of Super Bowl counter-programming, this Animal Planet show is now in its 11th season. Initially programmed as a one-time event that would run opposite the Super Bowl (rumor has it the Yule Log was the inspiration), the Puppy Bowl became an annual event after it drew 3.3 million viewers. Rick Holzman, general manager at Animal Planet, said that the puppies are now a “big part of the event’s pop culture fabric.”

Last year, the contest, which features a teams of dogs (all of which are rescues), along with a human ref and hedgehog cheerleaders, drew 13.5 million viewers. Executives familiar with the matter said it’s a cheap but successful bet: 30 seconds of ad time costs under $100,000, and 75 percent of viewers own cats or dogs. For example, Subaru, which has been running ads featuring Subaru owners and their dogs (tagline: “Dog tested, dog approved”) doesn’t advertise during the Super Bowl but is a major sponsor of Puppy Bowl.

Fish Bowl
The animal bowl formula doesn’t necessarily translate across all species. Last year, NatGeo dove into the counterprogramming fray with its tongue-in-gill offering Fish Bowl, a four-hour special that premiered Super Bowl Sunday evening. It featured a household goldfish named Goldie swimming around in a bowl filled with water. At the time, NatGeo Wild announced, “Predatory cats, canines and field goals are just the beginning. This remarkable little goldfish handles whatever the tides throw at her.” The show garnered only 27,000 viewers.

YouTube’s Halftime Show
New this year, YouTube — long the home of AdBlitz, the dedicated channel to watch all the Super Bowl ads and vote for your favorite — is launching its own halftime show. Hosted by Harley Morenstein of Epic Meal Time, the program will feature performances by YouTube stars like Freddie Wong and Toby Turner, fake ads and real ones. The program will be produced by Los Angeles online-video network Collective Digital Studio, and is Google’s attempt to draw some video ad dollars away from Twitter and Facebook. “It’s a no-brainer,” said Reifenheiser. “It’s already a destination for Super Bowl ad content.

Lingerie Bowl/Legends Cup
The championship game of the Legends Football League (formerly known as the Lingerie Football League) probably appeals to some of the same sports fans who enjoy football, according to Reifenheiser. It runs before the Super Bowl and is a full-contact game featuring women in lingerie, helmets and other protective gear. It has run into its share of branding problems: Three straight games were canceled from 2007 to 2009 and in 2003, Chrysler withdrew its sponsorship for the event, citing complaints from viewers and dealerships. But that’s not stopping the company: “We enjoyed amazing success as a Super Bowl halftime counterprogramming special,” said Mitchell Mortaza, founder and managing partner of LFL Global, adding that that was the impetus to turn the Lingerie Football League into a season-long event that is now the “most widely distributed women’s sport on television.” The league charges between $1.8 million and $3 million for ad buys, he said.

Wing Bowl
This annual Philadelphia eating contest doesn’t get much TV time, but considering that 20,000 people come to watch people eat chicken wings, it merits a mention. Held the Friday before the Super Bowl at Philadephia’s Wells Fargo Center, the event gets covered on talk radio and includes a contest for women, called the Wingettes.