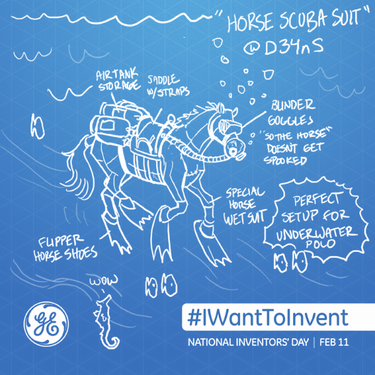 Monday was Inventors’ Day, which is celebrated on what would have been Thomas Edison’s 166th birthday. To celebrate, GE created a fun, real-time Twitter campaign to give respect to the art of invention.

The campaign revolved around the hashtag #IWantToInvent. GE told people to tweet their invention ideas to GE using the hashtag. GE had illustrators ready and waiting to draw the best ideas as they came in as professional blueprint sketches.

“While Inventors’ Day was a holiday of sorts, it certainly wasn’t a Super Bowl-sized event, which is why we saw it as a unique opportunity for our brand,” explained Jon Lombardo, head of GE’s social media center of excellence. “We believe that brands should identify days that are important to their audience rather than waiting for prime time events to participate.”

GE has really been emphasizing its brand story of innovation and invention over the past few years. GE has been involved with all kinds of fun and interesting projects. For example, the GE “Juice Train” is powered by two fuel-efficient 4,400 HP GE Evolution Series Tier 3 Locomotives and brings Tropicana Orange Juice up the Eastern seaboard. Another project, GE Garages, consists of various skill-building centers (run in collaboration with partners like TechShop, Skillshare, Quirky, Make and Inventables) that serve as advanced manufacturing labs for technologists, entrepreneurs and anyone else who is curious about new technologies and machines.

For #IWantToInvent, people tweeted in all kinds of ideas, like a dryer that folds clothes and a solar-powered hover board. Some of the more popular designs included a horse scuba suit, a doorbell ID, and an invisible suit — which sounds like being naked, unless they mean an invisibility suit which is a whole other thing.

According to Lombardo, GE engaged with over 250 people on the day and created over 70 customized images in just under seven hours. There were also some big-name participants, like famous prototyper and DIY geek Ben Heck and online personality Ze Frank.

The numbers won’t blow anyone away, for sure. But according Lombardo GE was very happy with the results and pointed out, for a seven hour span, the number of sketches that they created and conversations with people wasn’t nothing. They also got 2,600 mentions of the #IWantToInvent hashtag, 1,400 interactions on Twitter (RTs and replies), and over 6,700 interactions (likes, comments, shares) on Facebook. Also GE will use the content from #IWantToInvent across all of our its channels as a way to make the most of it.

It’s unlikely this kind of marketing is going to replace reach-plays like the Super Bowl anytime soon — actually, never. Yet as Oreo showed, brands acting nimbly and connecting with consumers immediately can pay dividends.

“We’re big believers that ‘the experience is the brand’, so we’ll look forward to creating many more of these experiences over the course of 2013 and having people judge our brand based on the aggregate impact of those brand experiences,” explained Lombardo. “This is a long-term strategy for us; as a matter of fact, we presented people in our communities with over 5,000 experiences in 2012, so we’re just getting started with respect to scale.”

One interesting sign of the times: GE’s campaign attracted participation from other brands. Trident, Tropicana and Ritz joined in on the conversation and contributed their own Inventors’ Day designs.

This is a great example of a brand doing real-time well. GE got its core audience, influencers and even other brands to participate in something that wasn’t attached to some huge, publicized event, like the Super Bowl, as Lombardo mentioned. That’s pretty impressive.

You can see the final collection of all the invention ideas from GE fans around the world here.

Our designers are standing by to prototype YOUR inventions! Tweet ideas w/ #IWantToInvent & see them come to life. twitpic.com/c2vdy9