GE puts emojis to use in the classroom

Emojis may already be ubiquitous online and in popular culture. Now, they’re about to move into the classroom.

To help make science more fun and accessible to today’s digitally savvy students, GE is releasing five new emoji-illustrated lesson plans for teachers to use for free, beginning today. Developed in partnership with The National Science Foundation and NBC Learn, these lesson plans feature sleek and colorful science handouts, worksheets and experiments designed for students in grades 5-12. Chemistry, physics and other core science subjects are available for download at EmojiScience.com.

Teachers explaining the difference between mixtures and pure substances to their students can, for example, conduct an experiment separating salt from seawater to demonstrate the differences among a solute, a solution, a soluble and a solvent.

Or teachers looking to explain the chemistry behind plastics to their students can make bouncing polymer balls: 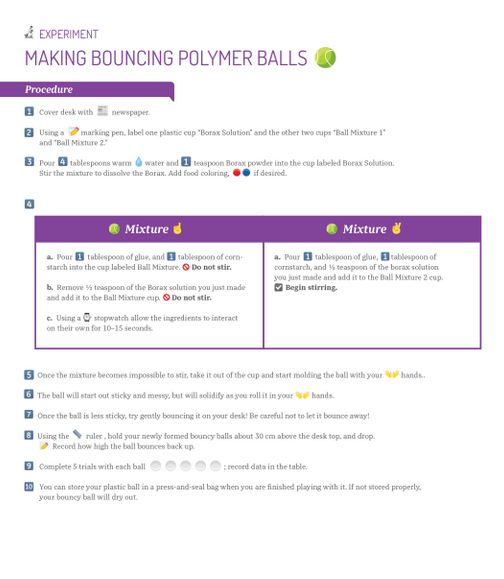 “In everything we do, we try to inspire through science technology and innovation — and really connect with the next generation through new communication tools,” Sydney Lestrud, manager of global marketing at GE, told Digiday. “Our activations around emoji have really resonated, so it made sense to take it to new places where we saw a need.”

GE’s lesson plans are the latest installments of its ongoing #EmojiScience campaign, which aims to make the STEM subjects more accessible and interesting to younger students. It was first launched last December when GE recruited celebrities like Bill Nye, Rosario Dawson and Richard Blaise to set up an “Emoji Science Lab” and send real-­time science videos to fans through Snapchat. GE also created an interactive Emoji Table of Experiments Web series hosted by Bill Nye.

Each of these activations drew an overwhelming number of requests from science teachers for more emoji­-inspired tools, according to GE. So it enlisted Twitter to conduct a survey of nearly 25,000 people on how effective emojis could be as an academic tool. More than half of those polled thought that emojis would make kids under 18 more engaged. The survey also showed that three out four science teachers saw a need to update lessons plans for the modern classroom.

According to emoji maker Swyft Media, approximately 6 billion emojis are distributed worldwide every day, which explains why brands across the board are deploying them with increasing regularity. Bud Light and Oreo have used emojis in their social posts, and brands like Ikea, Coca-Cola, Burger King and Comedy Central have even created their own branded emoji keyboards.

The lesson plans took two months to conceptualize and produce, and also incorporated feedback from teachers within The National Science Foundation’s network. GE will be spreading the word about them through all its social channels, and it will also do paid promotion on Facebook.

“We have no number we’re trying to hit in terms of downloads, but since this was prompted by feedback, we’re hoping it resonates,” said Lestrud.