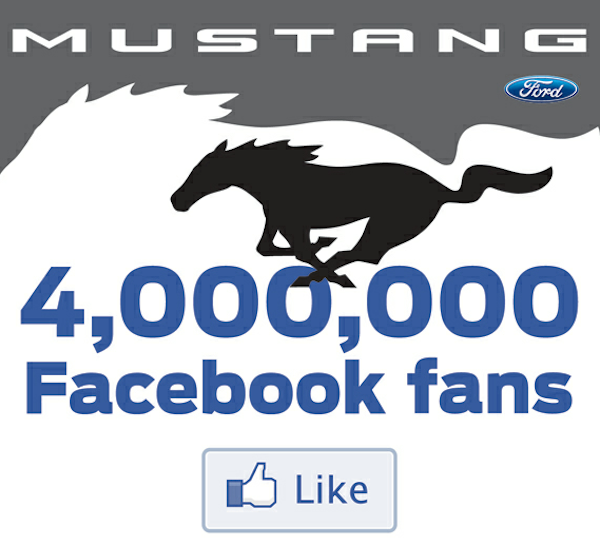 GM went public with its doubts about Facebook advertising last week. Meanwhile, rival Ford is crowing about its success there.

Ford Mustang has reached 4 million fans on Facebook. It took about four years to reach that mark, which the company claims is the biggest fan base on Facebook for a particular auto make. The Facebook page is currently growing by about 14,000 fans a day. And while GM is doubting the payoff from ads, Ford believes they’ve been an important part of its Facebook strategy.

“Starting in the fall of 2008, we got more serious on Facebook and our activity there,” said Scott Monty, head of social media at Ford. “Before that any Ford pages that existed were true fan pages, since Facebook used to allow users to create pages for the brands that they were passionate about. There was a college student in Atlanta with a Ford Facebook page, and we asked to co-administrate it. He allowed it and after some time became busy and ceded control of the page to us. That’s when we became more regimented and more deliberate with the content that we post.”

Ford ran several campaigns that helped it pile up fans. For example, a video ad ran on Facebook sporting the 2013 Mustang commercial. During the lifetime of the campaign, the video was viewed more than 1 million times and was liked 80,000 times. Ford claims this boosted ad recall. Also noteworthy is the fact that Facebook consumers were the first to see the ad, which was later used as a TV commercial.

Ford also attributes the growth of Mustang’s Facebook page to the Mustang Customizer app that was built specifically for Facebook, which lets users build a Mustang, souped with whatever features are most important to them. The 2013 Mustang Reveal application was also credited. It used fan likes to release images of the car prior to its actual debut at the Los Angeles Auto Show. The more likes the Mustang page received, the more sneak-peak pictures consumers got to see of the model.

“While it is easiest to post a press release or announcements on Facebook, these are written for the media and not for fans,” Monty said. “We have stayed away from that and are waiting for others to break the news for us. Instead, we found that posting a video or a photo is a better option. Visual assets on Facebook work a lot better than anything else, and Mustang is a very visual brand.

Ford has also used the Facebook chats feature to connect its audience to car experts. For example, Jim Farley, a Mustang enthusiast, was asked to host a chat. When Ford offered up Carol Shelby, the response was incredible. Mustang enthusiasts were also really excited to talk with the Mustang chief engineer.

Lee Jelenic, car marketing communications manager at Ford, said that the company is continuously learning. He said no one could possibly have it all figured out, since Facebook is still so new.

“It’s the evolution of learning,” Jelenic said. “When you have a vehicle like Mustang, with so many different demos, we are still learning what content is good for a broad audience.”