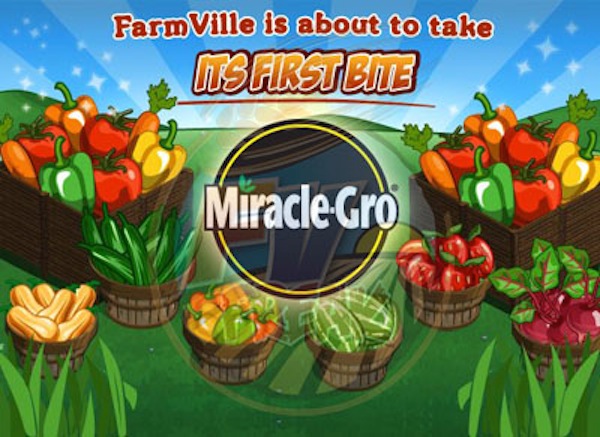 Facebook’s growing audience of social gamers is attracting more brands to the space. Brands are constantly exploring ways of differentiating themselves online, and brand integration within Facebook’s social games is one way they’re doing that.

Facebook classifies 300 million of its users as social gamers, and 53 percent of all Facebook logins are solely to play social games. This number highlights the opportunity in terms of reach, but there needs to be some correlation between the two for an integration to make sense. Otherwise, the ad placement within a game becomes intrusive and bothers players.

People in the industry often say that the best type of advertising is the type that does not feel like advertising. This is probably the biggest opportunity for brand integration within Facebook games. Consumers don’t even realize they are being marketed to. The key is contextual relevance. For example, Miracle-Gro recently partnered with Zynga’s FarmVille to allow players to use Miracle-Gro to grow and harvest their crops. Facebook games provide a captive audience for brands. These gamers appreciate branded rewards that make their gameplay more enjoyable.

There are three different ways that brands can integrate themselves into a social game: light, medium and deep brand integration. Light integration means that most of the time consumers won’t even know that it’s an ad. For example, dog food brand Pedigree is integrated in the Happy Pets Facebook game. The brand used a Pedigree can of dog food as one of the virtual items in the game.

In medium integration, brands enter games’ story lines and actual quests. For example, Lady Gaga teamed with Zynga last year to introduce a new album to players of Farmville and Word With Friends. Consumers could access a Lady Gaga-branded farm in Farmville with decorations themed with the “Born This Way” music video. For the Words With Friends takeover, Zynga revealed a word each day that players could pick to draw for a chance to win tickets to a Lady Gaga concert and a signed copy of her “Born This Way” album.

Deep brand integration occurs when the brand integrates itself into the game completely. A good example of this is Kraft Foods’ integration into the Trash Tycoon game. Kraft and Trash Tycoon worked well together because of the CPG brand’s big push for sustainability. Trash Tycoon is a game in which players clean up trash, sort it for recycling and then upcycle it into new products. Throughout the game, players need to collect energy items. Kraft integrated its cheese products here, calling them these energy products. So once a player used up an energy item like Kraft string cheese, for example, the leftover wrapper became game items that players could use to win points and even make special game items. Another example of deep brand integration would be Honda’s introduction of its CR-Z model in the Car Town for Facebook game. The car model was integrated into the game as one of the race car options for players. There were billboards placed on the roadside throughout the game.

According to Port, ads in games usually don’t feel like ads, which is why the industry average for in-game ads is 10 times higher than regular online banner ads. Some of the challenges that are holding brands back from the social gaming space may be costs, a lack of knowledge of the space and the difficulty of finding a game that marries well with your brand.