Exo embraces its No. 1 ingredient: crickets 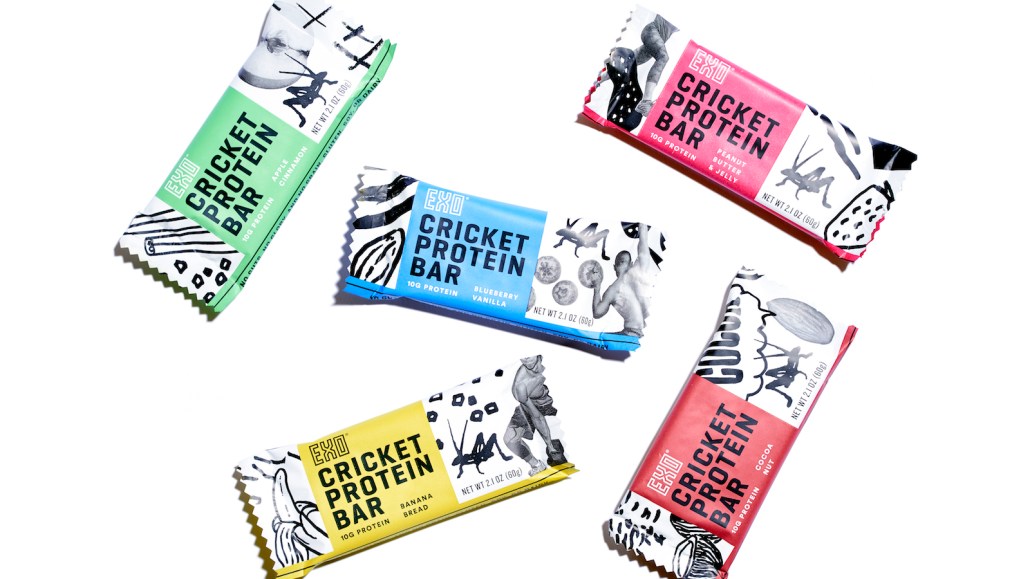 Health-conscious Americans are beginning to come around to the idea of eating crickets, which 2 billion people around the world regularly eat as an excellent source of protein. The trend is taking off in the U.S., so much so that Exo, a brand that sells cricket-infused protein bars, is no longer hiding the insect from its branding.

On July 19, the Brooklyn-based brand will begin featuring the arthropods on its website, all its packaging and within social posts.

This is a significant change. To protect the squeamish, Exo originally downplayed that its bars contained cricket flour, even though each bar contains 40 of the insects. Its packaging looked indistinguishable from competitor brands online and at the 100-plus U.S. stores where consumers can find them, only mentioning cricket flour in a 12-point font.

“When we first started, the market was really new. The idea of eating crickets was something that was just starting to enter the cultural conversation,” explains Greg Sewitz, co-founder of Exo. “As it’s become more mainstream and as more companies come onto the market selling other food products made with crickets, we’ve seen a switch happen in consumers’ minds.” Now, Sewitz said, the brand wants to “start owning the cricket in the room.”

Exo conducted several focus groups with its product’s consumers and others who had never tried it to determine the route they should take. They revealed that consumers who were actively looking for crickets or the brand were confused by the old packaging. “When speaking with our core customers, they said, ‘Look, guys, the very reason why we buy these is because of the cricket.’”

The rebranded protein bar’s packaging will feature black-and-white illustrations, including one of a cricket set against bright pops of color. In bold type, the packaging will read: “Cricket Protein Bar.”

The ultimate goal of Exo’s rebranding is to differentiate its product, said Sewitz. “For a long time,” he said, “we were not really using this asset that sets us apart from all the other protein bars out there, of which there are many.” Already, some direct competitors that use crickets in their protein bar recipes have allowed the bug to take center stage on its packaging, such as startup Chapul.

The redesign of the website is also an important part of the new strategy, said Sewitz. After all, according to him, the majority of the brand’s sales — 85 percent — come directly from the brand’s website. “The website is such a big part of how customers find our bars and purchase our bars, much more than other food companies; we really wanted it to stand out,” he said. “It’s really representing the brand in its own way.” Exo’s website and social channels will celebrate the cricket with the slogan “Weird is good” and influencers who promote protein-packed crickets.

“We found that having someone you know or trust vouch for the quality and taste of cricket protein, which is still slightly odd for some people, goes a long way in getting them to try it for the first time,” said Sewitz. The website will also feature more photography of people incorporating the bars in their everyday lives.

For strategy and design, Exo worked with neighboring independent design studio Gander. Gander has experience working with experimental food brands, such as Banza, which sells pasta made out of chickpeas; and Misfit Juicery, which sells juice made from misshapen fruits and vegetables. “We work with a lot of brands that take weird shit and make them into other things but do so in a fun and exciting way,” said Mike McVicar, co-founder of Gander. “We believe brands that are willing to be daring will have true longevity.”

McVicar said Exo’s new design makes the brand stand out. “Everything is haphazardly thrown together to cue that this is a different type of brand that is doing things differently,” he said. “We wanted to have a rough but accurate illustration of a cricket. We intentionally didn’t go cute with it, either. It should be a bit like, ‘Crickets are badass.’”