The emojification of brand advertising

Pictures speak a thousand words. Especially if those pictures are fun graphic emojis like a smirking face. Or a face with tears of joy. Or a see-no-evil monkey. Or

Emojis have taken over the marketing world, with an array of brands using them to communicate with their audiences on social media on a regular basis, smoothly penetrating into their customers’ everyday conversations by using the language they speak.

Bud Light, GE and Oreo are just three among the myriad brands that have jumped on the emoji bandwagon over the past year. Bud Light seamlessly stitched together an emoji American flag to celebrate the 4th of July on Twitter last year, while GE crafted an entire periodic table of emojis with corresponding DIY science experiments last December. Oreo pulled off one of its most successful campaigns in China last year, asking parents to take photos of themselves with their children and paste them on dancing emojis. 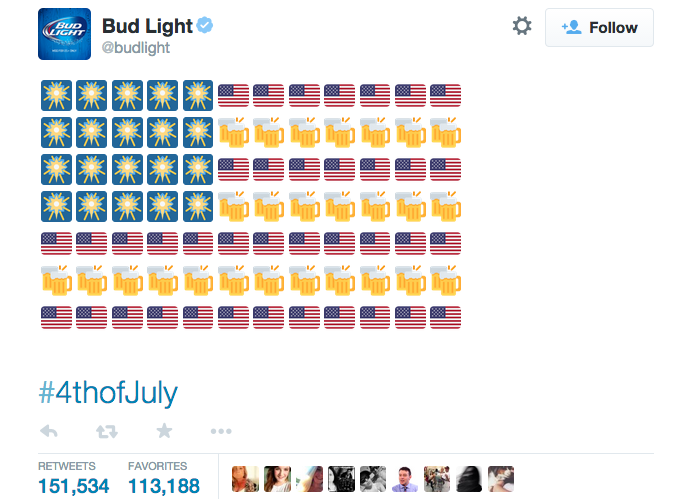 “We know it’s important to speak the language of our fans,” Janda Lukin, senior director at Oreo North America, told Digiday. “So much meaning can be communicated with a single emoji, and we’ve been able to tap into that by using emojis to share our message of seeing the world with openness and curiosity.”

According to data from eMarketer, there are nearly 2 billion smartphone users worldwide, and 41.5 billion messages and 6 billion emoticons or stickers are sent around the world every day on mobile messaging apps, according to branded digital startup Swyft Media.

Most important, emojis represent a marked cultural shift in the vernacular toward a more visual form of communication, presenting brands with an opportunity to convey their messages even more creatively. For linguists, emojis add the zing to communication, going beyond the vanilla semantic part of language and making it more fun and expressive.

“No human being would ever just utter that sentence like a robot,” John McWhorter, linguistics professor and seminar faculty at Columbia University’s Center for American Studies, told Digiday. “Emojis get across that human aspect of communication.”

“Emojis are doing what the tone of voice did on the telephone and what gestures, tones and facial expressions did in interpersonal communication,” agreed Mitchell Stephens, professor at NYU’s Arthur L. Carter Journalism Institute. “It gives people something that has been missing in writing for the past five and a half thousand years.”

Emojis have become so mainstream that brands are now looking for ways to make them more personalized, carrying their own brand stamps. This demand has spawned an entire cottage industry of platforms that create personalized branded emojis, stickers and GIFs for brands. Mentos, Ikea, Coca-Cola, Burger King and Comedy Central are among several brands that have created their own branded emojis in partnership with platforms that build these bespoke emojis, including Swyft Media, recently. Even Snapchat recently incorporated emojis, shows those icons instead of people’s “best friends” on its platform. 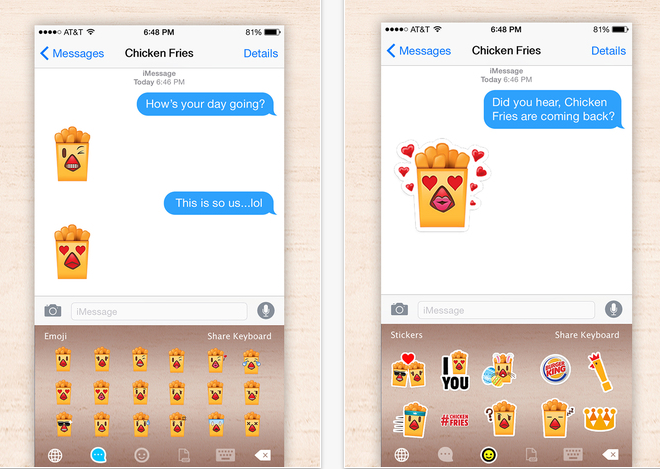 Andrew Cunningham, social marketing lead at agency Huge, affirmed that there is a desire these days for brands to express themselves in a more unique manner.

“Original unicode emojis first filled the gap where text couldn’t tell the entire story,” he said. “These keyboards have simply been the evolution of that type of behavior.”

One such platform that enables brands to do this is Snaps — officially launching today — which creates custom branded emoji keyboards and sticker campaigns for brands to reach their consumers. It lets brands organically insert themselves into messages through its partners’ messaging apps, like Kik, Kanvas and others, and even provides them with engagement analytics.

“The global messaging market is massive and growing,” Christian Brucculeri, CEO of Snaps, told Digiday. “People are shifting from Facebook and email to more personalized real-time communication on messaging applications — every brand should have a strategy for reaching consumers in this channel.”

“It is advertising from a completely different perspective,” added Vivian Rosenthal, founder of Snaps. “It is a non-intrusive and completely opt-in experience, where fans choose to to download the keyboards. That choice gives them agency and makes them brand evangelists on their own.”

Burger King and Comedy Central are the first among Snap’s 20 brands that have already unveiled custom keyboards for their fans to incorporate in their emoji libraries during Snap’s soft-launch period. The latter partnered with the platform to create a “Broad City”-themed emoticon keyboard for the premiere of its hit show “Broad City’s” second season in January. Time Inc.’s Food & Wine magazine and Ferrara Candy Company’s Trolli brand is also soon launching a custom branded keyboard for its new Sour Brite Crawler Minis and Extreme Sour Bites.

“It makes sense for our brand because we are playful and don’t take ourselves too seriously,” said Jill Manchester, svp of marketing and brand strategy for Ferrara. “But I don’t know if it makes sense for every brand to be doing it.”

While consumers can go crazy with some Chicken Finger and candy emojis, there is one casualty in this shift from the analog to the digital: emoji’s red-headed step-sibling, the lowly emoticon. :( RIP.