How eHarmony found a perfect match in social media and humor

Testimonials of picture-perfect couples have become a trope of online dating-site marketing, eHarmony included. But lately, the online dating site has gotten far more engagement by looking at the humorous side of singledom.

When a blizzard hit the East Coast a few weeks ago, the brand posted this photo on Instagram of an owl surrounded by a blanket of snow to suggest how single people would feel.

This is the kind of content eHarmony been pushing over the past 18 months since it revamped its digital strategy, which includes emoji quizzes, dating tips and advice from its writers at eharmonyadvice.com. 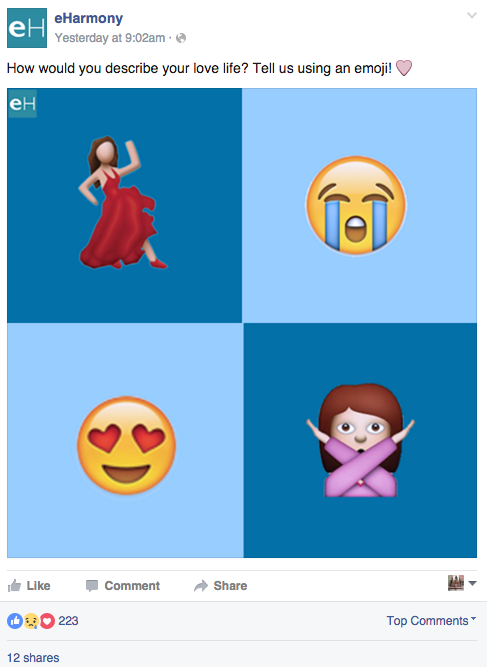 “You would think testimonials would be great, but when someone is trying to get someone else to write them back, they don’t want to see a happy bride,” said Kerianne Mellott, eHarmony’s director of social media. “So our content speaks to frustrated singles and motivates and inspires them — it is lighthearted, helpful, interesting and humorous.”

While the brand is active across social channels including Facebook, Instagram and Twitter today, that wasn’t always the case. Dating, after all, was far different when eHarmony was founded in 2000. Since then, players like Tinder and OkCupid have shaken it up with slick interfaces and an ability to offer a match just with a swipe. So eHarmony realized it needed a strong social voice and better targeting to get people to click through to subscribe.

To provide real-time customer service and content, the brand expanded its social team from one to four people. It began using Hootsuite and Google Analytics to gather social data, track conversions and target based on demographic, location and interest. The brand nearly doubled its spending on paid social from 2014 to 2015, Mellott said.

Through these efforts, eHarmony learned to track subscriptions from social media and improved its online response time. (EHarmony claims an 84 percent response rate within two hours of a customer reaching out on social platforms.) Its social following has grown in the past year, from more than 244,000 to more than 290,000 on Facebook, according to social analytics firm Unmetric. By comparison, Tinder has over 550,000 Facebook fans and OkCupid, 60,000.

Online dating is getting more popular among the youngs, which eHarmony sees reflected in its signups. With that in mind, it’s also looking at other, newer platforms. It recently ran an influencer campaign on Periscope and its first Facebook live-video campaign last week.

“We are continuously experimenting with newer platforms as our audience gets younger and more active on mobile devices,” said Mellott.