Droga5 CEO Sarah Thompson: ‘Believe in your own bullshit’ 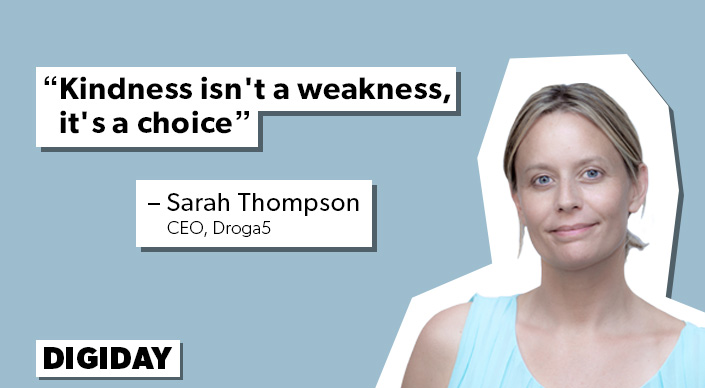 Sarah Thompson is CEO at arguably one of the hottest indie agencies around: Droga5. In a 15-year career that has taken her through Goodby, Mullen and BBH, she has risen through the ranks, ascending to the top position at Droga5 in April last year. She chatted with Digiday about growing up in a small town, her responsibility to women in the industry and rug cleaning. Excerpts:

Who was your first boss?
I grew up in a small rural town in Western Maine. It was 900 people. It’s still 900 people. My first job when I was 15, I worked at a little market, Ron Burton’s Market. It was pretty unglamorous. Ron Burton, who ran this market was a big influence on me. He took pride in the store and in his work. The way he dealt with the customer base was amazing. Whether it was the president of the nearby university, or the person who came in with food stamps, he treated everyone the same.

And your first job after school?
Was in San Francisco after college. It was the mid-90s and I couldn’t get a job because my typing skills were subpar. But I got a job at Pacific Gas and Electric in the maintainence department. I was the head of building maintainence, and I had to check 25 floors. So before they cleaned the rugs on the floor, I went around and looked at where the spots were on the rug. Then after they cleaned it, I had to go back and make sure they were gone. I took the spots very seriously.

How do you apply the things you learned there to what you do now?
Droga5 is a creative agency. No matter what you do you’re part of the great work. You may not be the creative department, but you’re in finance. For our clients you’re part of the greater vision. As far as the empathy goes, it’s for different people, not just employees but also the client base. You have clients of different backgrounds, clients completely different from ourselves. It’s just like how Ron Burton did it — treat everyone the same.

Who was your first boss in advertising?
At Goodby it was John Elder, who is now the president of Heat. He had a very different approach. He wasn’t someone who had to take over the room. He was very nurturing and empathetic. It made me realize at a young age that kindness isn’t a weakness, it’s a choice.

You’ve brought up kindness a few times now. Do you think people don’t think of it as as an integral part of leadership as they should?
The world is changing a bit. I dont know if it’s kindness or being nurturing. It fits right alongside being strategic and confident. I do think there is an element of female leadership that can do all those things.

We’ve heard so much about how women need to be more like men when it comes to leadership. So that isn’t true?
Women don’t need to be more like men to succeed. Old boardroom traits like pounding your hand and commanding control are unnecessary. There is power in being exactly who you are. You can be nurturing and pull people up. It’s not about patting people on the back when they cry but about being kind.

Do you feel responsible for making sure women are pulled up?
I do, but it wasn’t until I had my first child. A couple years after that I started feeling ownership of the issue. I spent many years drifting away in mid-level management because I was worried about taking on too much responsibility. I feel women who have worked for me or with me, they sometimes become stagnant. They’re very confident in mid-level positions but not quite grasping at that next big thing. I do feel the responsibility to help women ask for it. To help and push how I was pushed.