Domino’s Pizza is looking to game Instagram — literally. The pizza delivery chain has brought its delivery vehicle, the DXP, to Instagram via a click-through game called “DXP Adventures.”

The campaign was designed to make the DXP a household name. When players tap the tag “start_the_adventure” in the Domino’s promoted Instagram post, they will be directed to a new account page within the platform that features the four levels of the game. 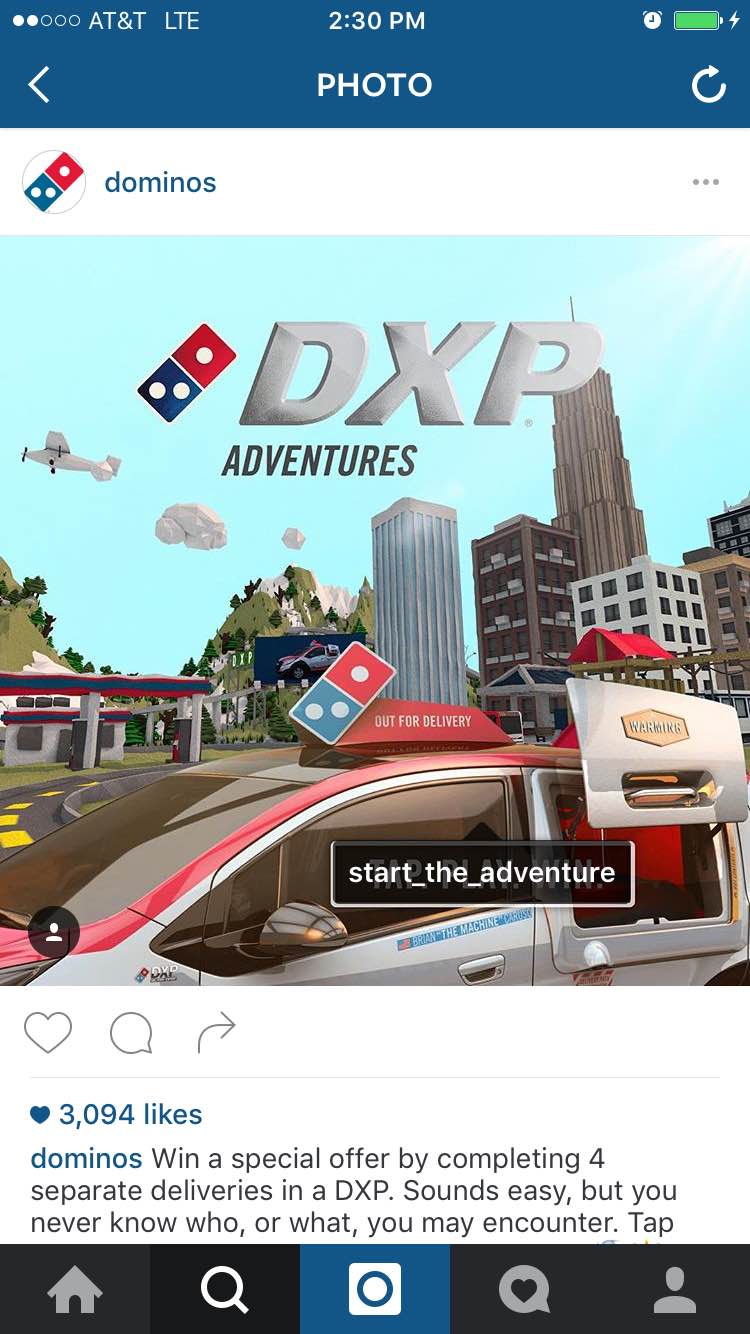 By clicking through each level, players are prompted to answer a multiple choice question about pizza. Clicking on the correct answer takes the player to the next stage of the game. Every time a player moves onto the next level, they will receive one letter from an offer code. At the end of the game, they will be able to see the full promotional code, which gives them 20 percent off their next order at Domino’s.

The game generates the same code for everyone though. So if a user posts the results to Instagram, it would be game over for Domino’s. The offer code and media buy run through April 10, but Instagram users can still play the game after that.

CP+B, the agency behind this campaign, has tested a few Instagram-based games in house before, but this is the first time that it has officially brought the gaming concept to the public on behalf of a brand. Matt Talbot, vp and executive creative director for CP+B, explained that the idea is really simple – the DXP is a unique creation in general so his team wanted to use Instagram in innovative ways, making the network more interactive with Domino’s audience.

“We want to adapt the DXP’s microsite experience to different social networks and we want to do more than just a photo or a video on Instagram,” said Talbot.

A project like DXP Adventures requires lots of images and technologies like 3D rendering for the interaction of tagging and clicking into the tags, but it’s not rocket science. Talbot added that every time a brand embraces a new content format, the real challenge lies in usability testing – which is to identify the optimal design.

Since DXP Adventures is in its early stages, it’s still unknown how much Instagram traffic will turn into sales. But Kate Trumbull, director of digital marketing for Domino’s, told Digiday that she’s happy with the game’s impressions so far.

“The goal of our social media campaigns is give people an idea to talk about our brand. This Instagram-based game speaks to the creation of the DXP and gives us a chance to show the vehicle’s features,” said Trumbull.

Instagram has been a popular destination for paid social. The network may appeal to more ad spenders when it extends the length of videos to 60 seconds. While Trumbull refused to disclose which social media platform Domino’s allocates the most ad dollars to for competitive reasons, she said that the pizza chain is spending much more on Instagram this year compared to last year.

“Instagram is a top platform for us. We are looking to experiment with more content formats there,” she said. “We want to be where our consumers are.”

Domino’s has been investing in digital to accelerate its delivery service. Last year, the company had 15 digital platforms in the U.S., from smart watches to TVs to pizza emoji ordering, which drove approximately 50 percent of its sales within the market, according to Domino’s annual report.