The industry is moving towards a dangerous direction.

Long work hours, a lack of work-life balance, low levels of career advancement opportunities inside agencies are leading to more people looking for a new job and more mental health and burnout concerns.

Digiday’s annual research survey about agency work, life and culture found that:
1. Agency employees are working longer hours and believe they’re underpaid
2. They prize work-life balance above all
3. A quarter of them are looking for a new job

People are working longer hours, and they believe they’re underpaid.
Salaries have remained an issue in the agency industry for a long time. Because of the way most ad agencies are compensated by clients, there has been a downward pressure on both fees — and so salaries — that has led to in parts of the industry a talent crisis. 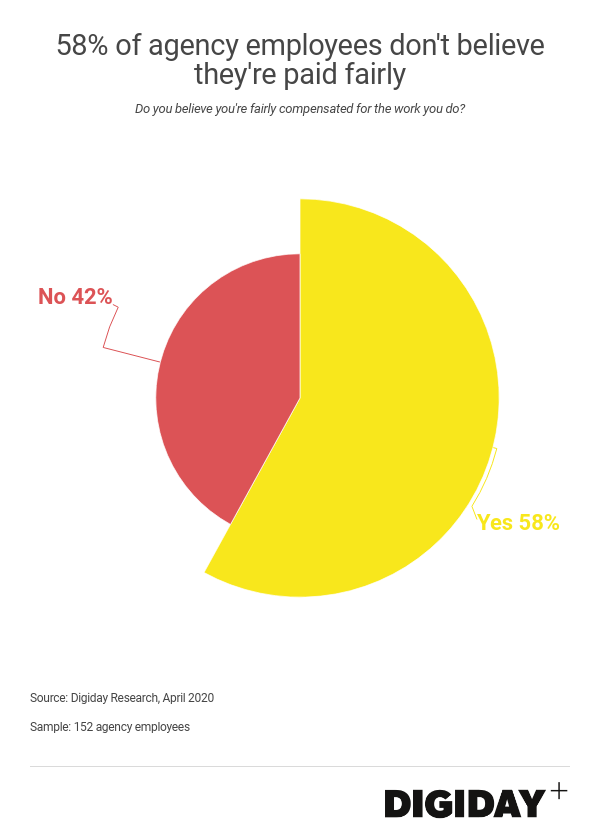 The results differ slightly between men and women. About 60% of men say they’re compensated fairly, compared with 55% of women.

The least experienced cohort (those with under four years of experience) were likelier to think their pay wasn’t fair. 57% of entry level workers, compared with about 32% of mid-career and 33% of experienced workers, said they weren’t being compensated fairly. 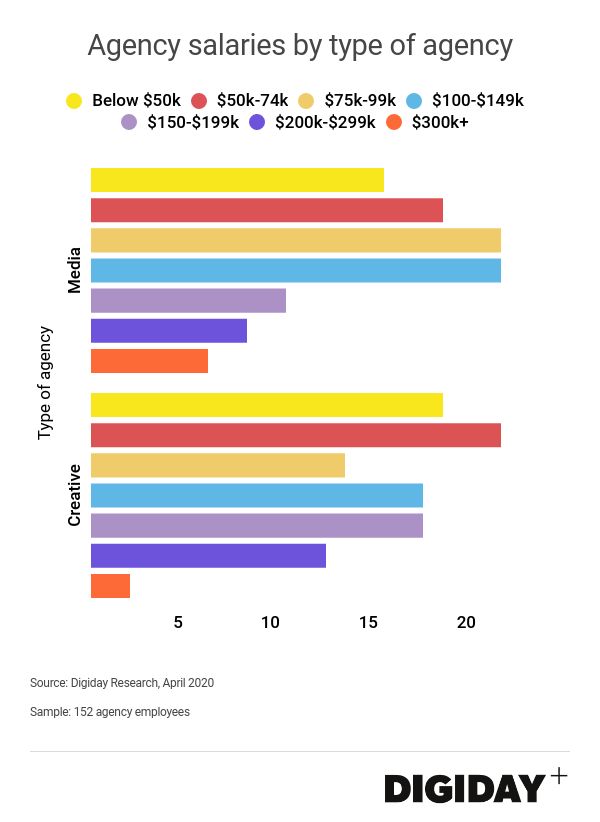 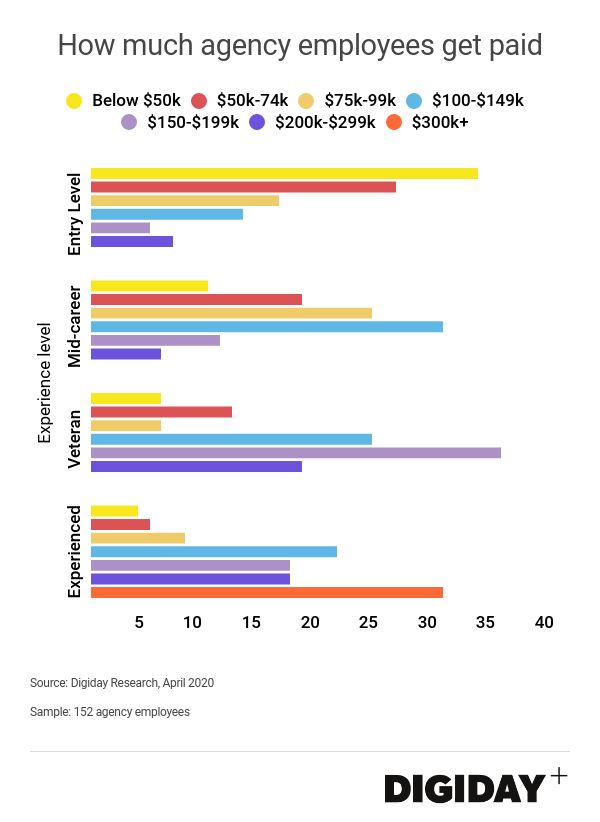 Agency employees work mostly between 40 and 49 hours a week. 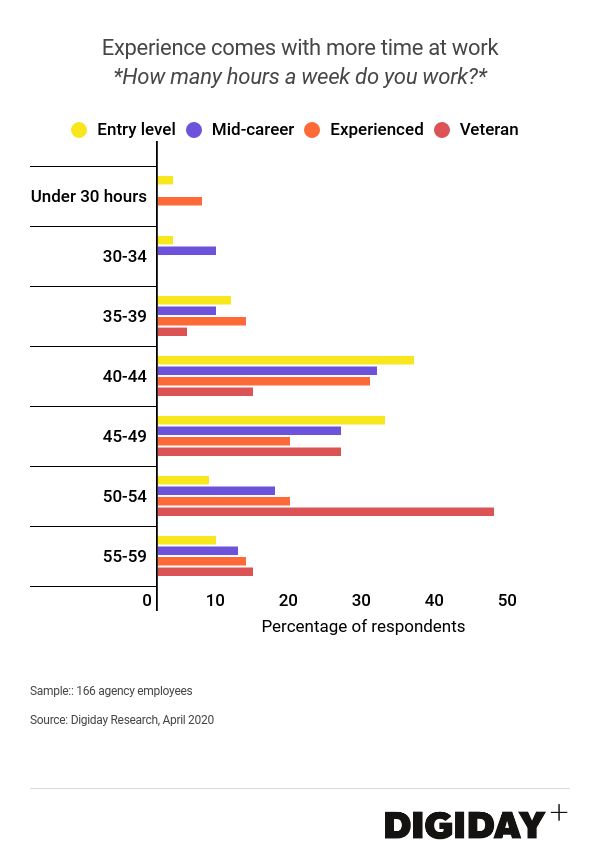 Americans are overworked, of course: Anything about 40 hours a week is defined as “overwork,” per most studies. Gallup this year found that the average number for office jobs is 47 hours per week.

What’s really important to people?
People don’t think they’re paid enough. And they’re also working, quite a lot. Those two findings combined are especially illuminating when you look at what people are most preoccupied with when it comes to their work lives, and what they think is most important.

Compensation ranks highly among agency employees, as is to be expected. About 86% of employees say it ranks as extremely important. But 88% of them said it was actually work-life balance. 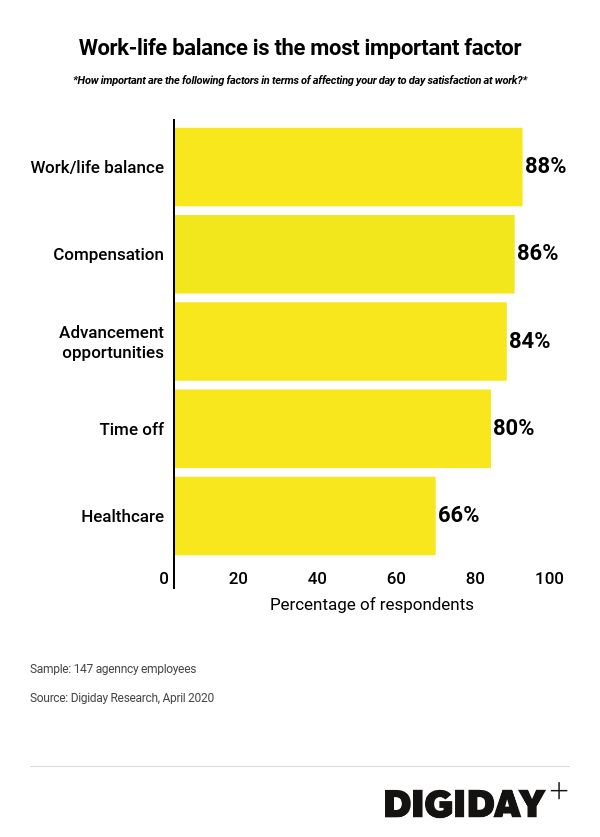 And that work-life balance call isn’t really being answered.

Vacation and overtime work is a problem: 44% of employees said they’re expected to work on nights and weekends, and 30% are expected to answer emails or work on vacation.

More than a third of employees are now worried about their mental health at work. That’s in line with last year when about 32% of agency employees said they were worried about it. 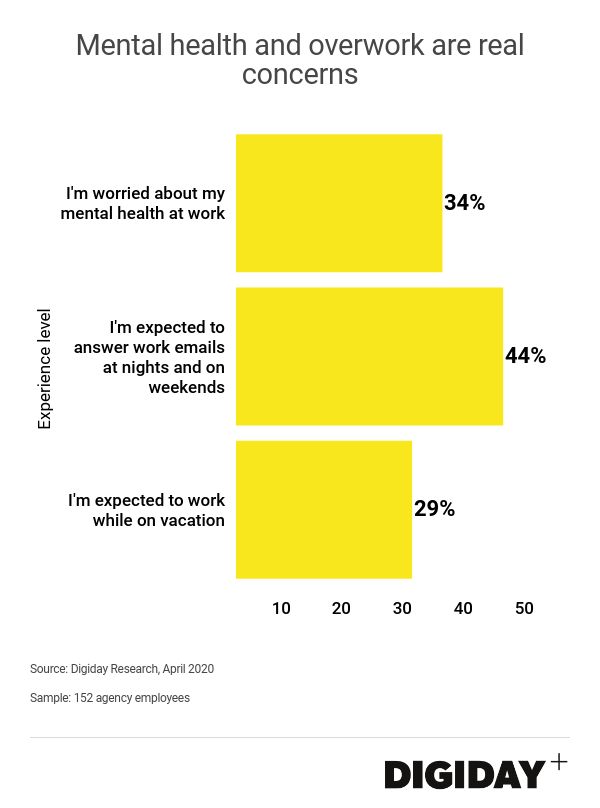 Business problems
The financial health of their companies is a problem for a third of people. Agencies have gone through a period of tumult recently. Factors like more work moving in-house, squeezed fees and razor-thin margins don’t help. Now, with the threat of the coronavirus spreading across the world and an impending economic downturn, uncertainty is even higher. Ad spending is expected to be cut, sales forecasts will be missed. As one agency exec said recently, worrying about jobs is not really a new feeling, but it’s become more apparent recently: “Everyone is nervous about their jobs. Working at an agency is like Lord of the Flies right now. Everyone is so worried about their job they’re not doing the work,” this person said.

About 63% of employees feel their jobs are secure; 25% of agency employees are now looking for a new job within advertising, while over a fifth are looking to leave the industry. 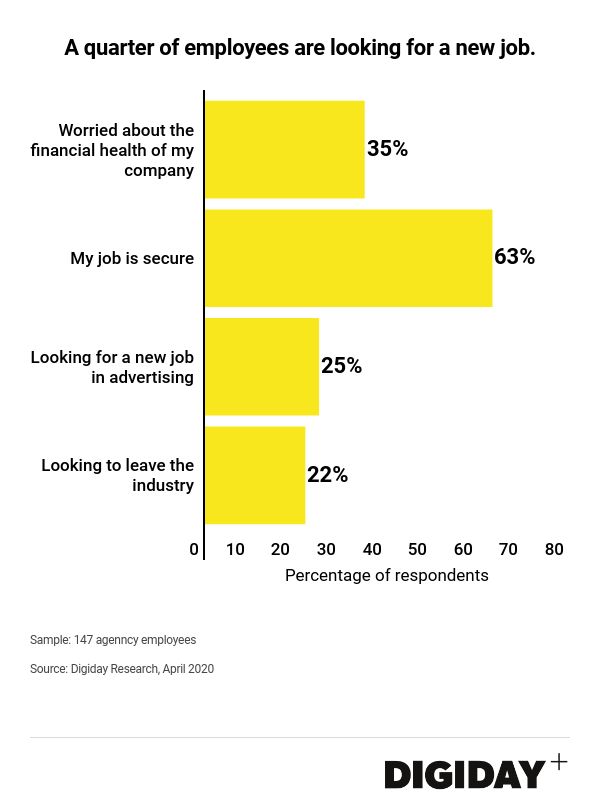 So where will they go?
Career advancement is a concern for 84% of people, who rank it as very important in their lives. This is where indie agencies seemingly are more attractive to people.

And 42% of people, asked where they plan to be working in the next year, said it would be indie agencies.

This is in line with last year, where the type of agency people worked in had real effects on their happiness levels. Last year,  70% of people at independent agencies said they are happy, while just 53 percent of those at agencies owned by holding companies said the same.  This year, fewer people are happy, but the difference is still vast between indie and holding company agencies. 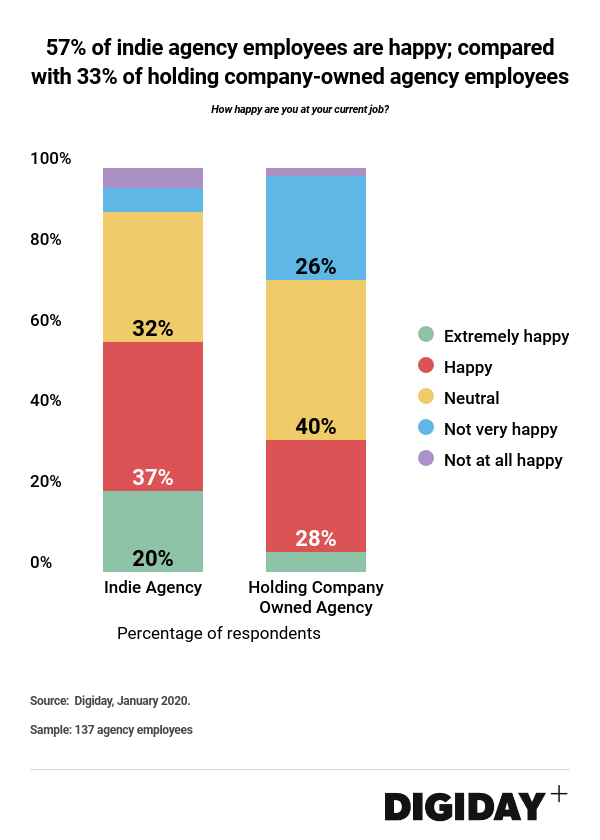