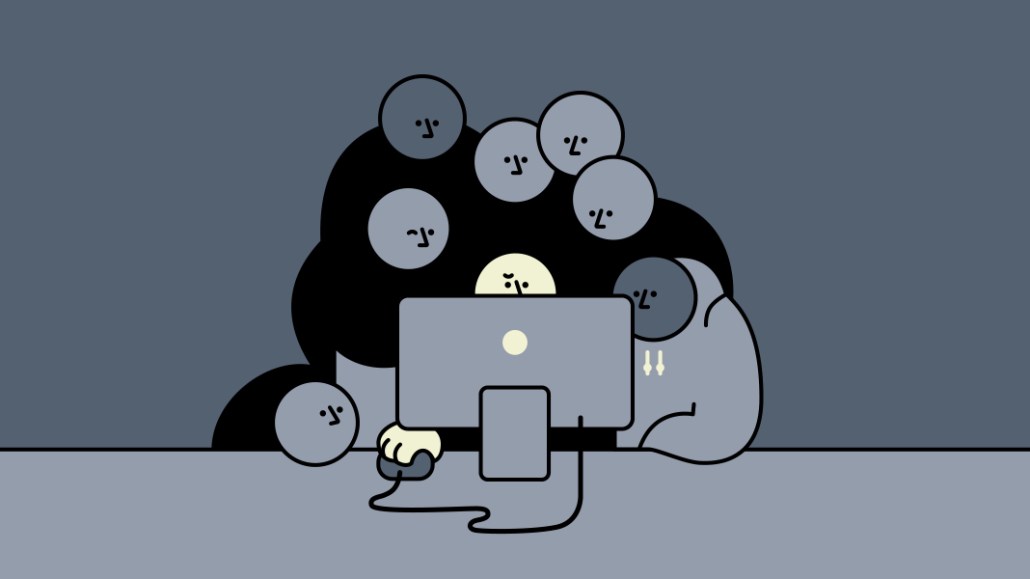 But as consumers become increasingly aware of how their data is being collected and used by advertising companies, the industry could have a bigger challenge to contend with: consumer pushback.

Seventy-five percent of Americans surveyed in an Aug. 8 online poll conducted by Digiday said they’ve taken steps in the past year to limit the information they share online with advertisers and social platforms. That’s a worrisome statistic for those companies reliant on using consumer information to deliver highly-targeted ads.

To date, relatively few Americans have understood how key components of online advertising have worked. Many are unaware of how cookies and other tracking technologies are being used to collect information, such as their interests, behaviors and locations.

A number of high-profile data breaches and privacy scandals in the past year — including Facebook’s Cambridge Analytica scandal and the Equifax data breach — have nudged the topic of online data collection back into mainstream media coverage and into the zeitgeist. The implementation of the General Data Protection Regulation in Europe, although it didn’t directly apply to U.S. consumers, left U.S. consumers inundated with a flood of impossible to avoid updates notifying them that companies were updating how they collected their data. Many consumers were shocked to discover just how many companies were collecting their information as a result.

When Digiday polled internet users on how aware they are that their personal information is being used for the purpose of online advertising, 53 percent said they are very aware and only 12 percent admitted they had little awareness. 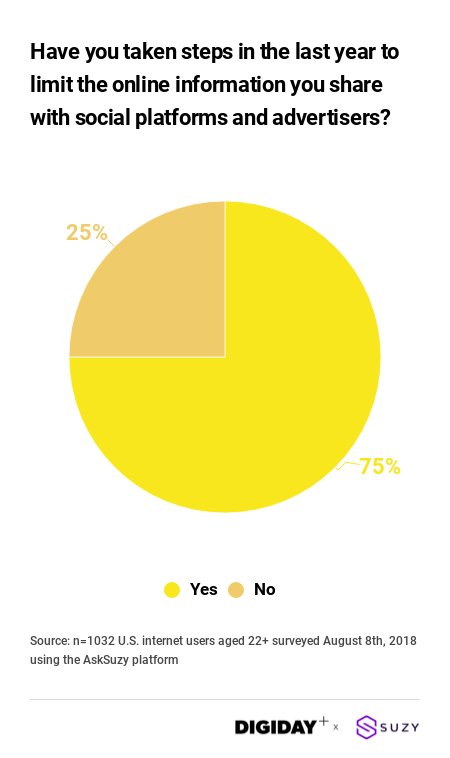 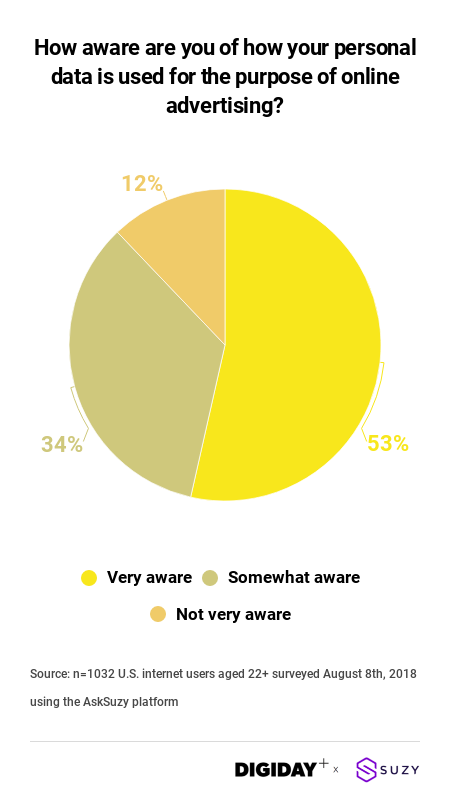 Consumer awareness of how their online behavior is being tracked for advertising is potentially bad news for advertisers and the ad-targeting ecosystem as a whole. Recent research found that users were less likely to be interested in an ad upon learning they were tracked across the internet to be served that ad. Meanwhile, 75 percent of Digiday+ members surveyed in April 2018 said growing consumer awareness of data privacy poses a significant threat to the model of online advertising. 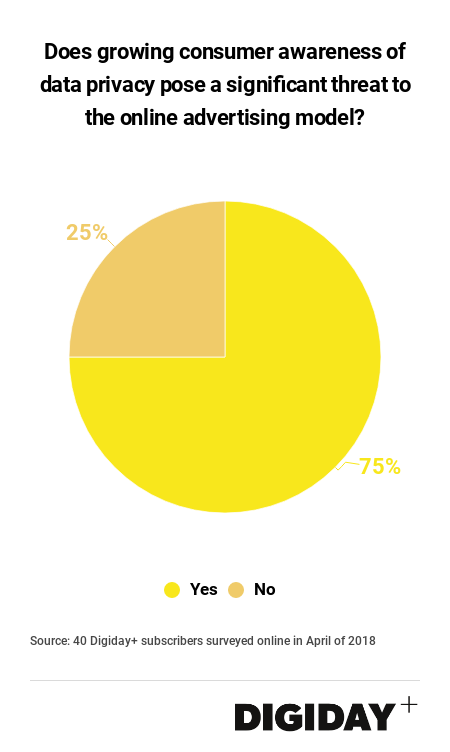 Unsurprisingly, the greater awareness a person has of how their personal data is used, the higher the likelihood that they’ll take action to limit the information available to advertisers. For advertisers and ad companies, less data is never good news. Over 80 percent of the those who claimed to be very aware of their data’s usage in online advertising said they had done something in the past year to reduce what information they share. Comparatively, only 54 percent of users who were unaware took a similar action. 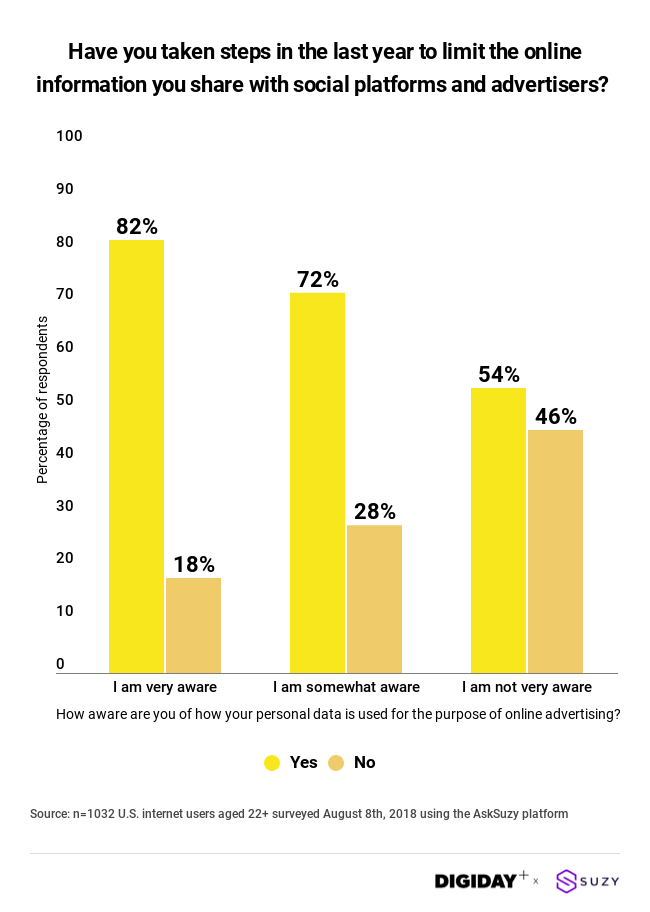 Consumers have several options available to limit the information they share with advertisers, such as blocking website requests to track their location, refusing to accept cookies or deleting information social platforms have on them. In the aftermath of the Cambridge Analytica scandal, Facebook introduced features its members could use to prevent the tech giant from collecting users’ data even when not using the social platform. It also began allowing users to delete the information that Facebook uses to help marketers target ads. Employing an ad blocker is one of the most common tactics used by internet users. Just over 30 percent of Americans will utilize one by the end of 2018, according to projections from eMarketer.

Industry executives already know what digital advertising would look like if consumers stopped granting access to their data online. The implementation of the General Data Protection Regulation in Europe has brought a resurgence in contextual targeting as some marketers shy away from personalized audience targeting in that market.

Consumers were surveyed by Digiday through the AskSuzy platform. 1032 people in the U.S. were surveyed on August 8th. Respondents surveyed were aged 22-73 and were 52 percent female and 48 percent male.