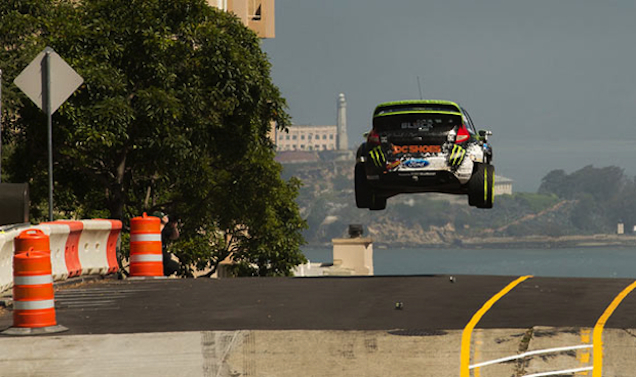 These days marketers and agencies are constantly talking about the power of owned and earned media, but few have succeeded like DC Shoes.

The company’s branded “Gymkhana” videos, which feature its co-founder and chief brand officer, Ken Block, tearing around obstacle courses in his rally car, have proved so popular that they now form the backbone of its marketing strategy — and they are taking budget from outbound advertising.

DC paid nothing for the distribution of its Gymkhana content. The videos were published on its YouTube page and then distributed virally through social networks such as Facebook and Twitter, as well as blogs and news outlets. The brand didn’t employ any media buys to further distribute the videos. The only overhead was the production costs of the videos themselves, and while closing down half of San Francisco for the day doesn’t come cheap, it’s still cost-effective, Block said, as the typical strategy spends far more money on “working media” over production

“We spend a lot of money producing the content, but we’ve hit on a formula that really works,” he said.

The success of the videos is having a major effect on the way DC Shoes thinks about its marketing investments. The brand has historically invested in a mix of media ranging from online to TV and print, but as the audience for its Gymkhana videos continues to grow, it’s diverting budget from paid media channels to create bigger, better, more impressive installments.

“We still do some paid advertising, but it’s been tipping in this direction for a while,” said Block.

As the production budgets for the videos have increased, so has the quality of the content. This creates a virtuous cycle in which it can spend more on content as it gets more returns.

In terms of measuring the ROI of the videos, Block admitted it’s not an exact science but said the company is more than happy with the 160 million views and brand impressions they’ve created so far. With so much content available to users online, it’s impressive to attract that many eyeballs to any piece of content, he suggested, let alone a branded one. The videos do feature DC’s motor sports footwear products, though, which have seen dramatic lift since being featured. “It’s a nice bonus when you can see a product selling specifically because of a marketing piece,” he said.

Interestingly, no agency has been involved in the Gymkhana project at any point, which has helped to further limit DC’s costs. Block himself  handles creative direction for the pieces, aided by an in-house team of five that contributes ideas and helps make it a reality. Third-party production houses, meanwhile, handle the actual filming, sound editing and post-production work.

Block voices a common criticism of agencies, which by their nature are generalists.

“I don’t think an ad agency would ever come up with this,” he said. “It’s a very specific driving style, and it comes directly out of motor sports. I have a marketing background and I drive, so it was a perfect storm.”

Though the “Gymkhana” videos were produced to promote DC’s products, which include motor sports apparel, Block thinks agencies and car brands could learn a lot from the company’s approach, specifically if they’re targeting a younger market.

“We try to do everything authentically, and that’s why our videos stand out from other ads with cars. They’re all done in a fake sort of way, and car companies haven’t realized that consumers want to see stuff that’s real. I’m always amused, and wonder what companies and agencies are thinking when I see those ads.”

Some agencies are reacting too slowly to the emergence of social media and platforms, he added. “Consumers are now being hit with marketing in so many new ways, and actually voting on how good your content is by sharing it or watching it. How agencies react to that is up to them, but over time we’ll see marketing completely evolve because of it; you can’t just broadcast any more. There will probably always be a place for paid media, but the content’s going to have to get a lot better.”

DC will soon get to work planning the next installment of the “Gymkhana” series, due for release in 2013. Block wouldn’t disclose what it might involve in terms of content but suggested from a budget perspective, it will at the very least be on par with the San Francisco video.

He concluded: “As long as it continues to work, we’ll keep on doing it.”