CVS enjoys a brand boost from kicking the habit 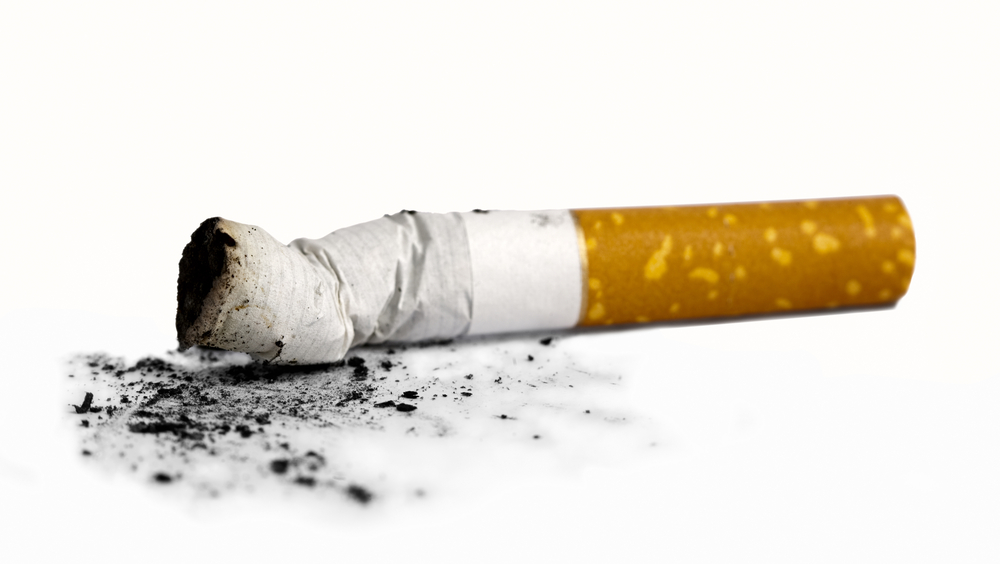 CVS is going cold turkey. In a move that repositions the branding of the country’s second largest drugstore chain, CVS announced Wednesday that beginning this fall it will stop selling cigarettes and other tobacco products in all of its 7,600 stores.

The move, which will cost the company some $2 billion is annual tobacco-related revenue, was instantly lauded by public health advocates and at the highest levels of government — the White House, Michelle Obama and Health and Human Services Secretary Kathleen Sebelius all tweeted their kudos. The announcement also landed CVS on the front page of The New York Times.

Dropping tobacco comes with a big financial hit, but the brand received significant positive buzz in just about every nook of the social media landscape — and in the wider media world. It isn’t every day when CVS is the subject of adoration from all quarters, while at the same time putting it a step ahead of rivals like Walgreens, which came under pressure to follow suit.

“I find it fascinating because they’re putting their brand before their revenue. This obviously isn’t a revenue play,” Jim Joseph, North American president of the communications and corporate branding firm Cohn & Wolfe, told Digiday. “This is such a move of a classically well-managed brand: they understand who they are and what they offer and what their customers want.”

A quick tour through Twitter suggests this is indeed something many people want.

Thanks @CVS_Extra, now we can all breathe a little easier, and our families can live healthier. –mo

Obama: “I applaud this morning’s news that @CVS_Extra has decided to stop selling cigarettes…in its stores.” pic.twitter.com/PAbM3AHkmv

We applaud CVS Caremark for their decision to end the sale of tobacco products and putting public health ahead of their bottom line.

The decision can be seen as the logical next step of a general realignment of the CVS brand that goes back to at least 2007, when the drugstore merged with Caremark. As a result of that merger, CVS became a powerhouse of a health care and pharmacy benefits management company with major ties to hospitals and insurance companies — one that routinely offers flu shots and in-store nurse practitioner consultations.

The question remains, however, whether the lift in the company’s public perception will do enough to offset the foregone $2 billion — still only 1.6 percent of total revenue — that CVS will be leaving on the table. In making the announcement for his company, Merlo said incremental cost cuts will keep the move from affecting the company’s profit statements.

“It creates an image for them for a cost. But it’s not 5 percent of their revenue,” said Matthew Quint, director of the Center on Global Brand Leadership at Columbia Business School. “What they’re hoping is that continuing to position the brand this way will eventually lead to revenue increases from partnerships they’re working on, with building their own clinics, partnering with health care providers of larger sizes, now maybe looking at doing cessation programs in terms of quitting smoking.”

There is already precedent for quitting. Target, for example, stopped selling tobacco products in 1996. On the other hand Walgreens, the country’s largest pharmacy chain, responded by saying it would offer a free online smoking cessation program. That could prove too little, too late, as the brand has come under heavy attack on Twitter: 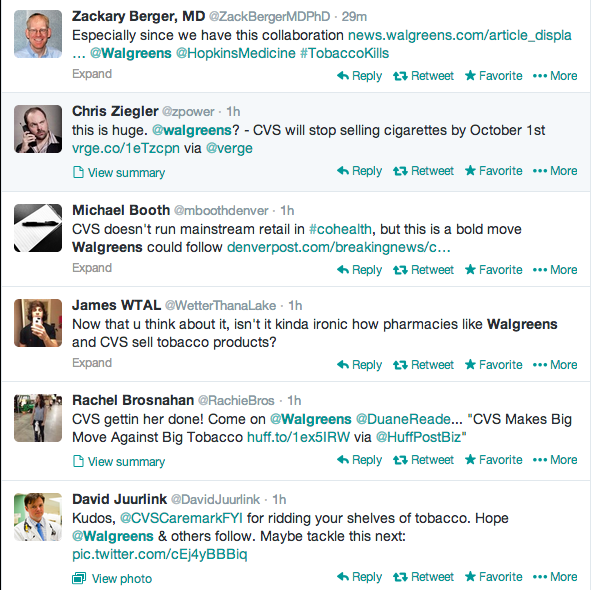 For all of its good intentions, CVS did run afoul of some patients rights advocates last year, however, when it announced a new policy that required the retailer’s 200,000 employees who obtain health insurance to disclose their weight, blood pressure and other personal health data to the company’s benefits firm — or pay a $600 fine. CVS also told smokers on staff that they must try to quit. Dr. Deborah Peel, president of the non-profit Patient Privacy Rights, lambasted the policy as “an incredibly coercive and invasive thing to ask employees to do.”

But the kerfuffle struck industry-watchers as on-brand and on-trend. At the very least, it conveys that CVS is committed enough to healthy living that it had already started in its own backyard.

“It is the trend to encourage work forces in support of healthier lifestyles, health and wellness — and to implement support programs to make that happen,” said Kathy Barbour, director of public relations and marketing at Baptist Health South Florida and chair-elect of the Public Relations Society of America. “I’ve seen other organizations take similar measures, though not by punishing with monetary fines.”

But the move also opened CVS to pointed questions about where the company will draw the line. If promoting wellness is the brand’s topmost priority, will it then stop selling soda, beer and junk food? Probably not any time soon. A proposed citywide restriction on soft drink sizes in New York City fell flat last year, for example, in what many characterized as an overreach on the part of then-Mayor Michael Bloomberg.

If CVS continues to sell junk food, it’ll be the only “health care company” I know of that does so.

“Where do they draw the line? That’s part of what they’re going to have to decide,” said Barbour. “Taking a stance on an easier issue like smoking and cigarettes is not as difficult. CVS is definitely on a slope now in terms of how they’re going to make those decisions. I hope they use their branding and their customers as their guide in terms of what those customers want from them.”