Crowdsourcing in the Social Media Era 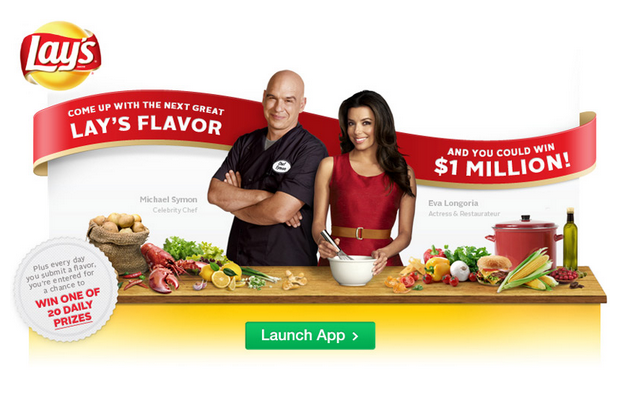 Crowdsourcing once relied on mass media. Today, social media gives it more reach and makes engaging with it more personal, which is a deep departure from its beginnings. At least that’s what Frito-Lay has found with the company’s recently launched contest for Lay’s Potato Chips, “Do Us a Flavor.”

The contest invites the brand’s Facebook fans to submit flavor ideas for the next new potato chip, with finalists announced in February. The winner will receive either $1 million in grand prize money or 1 percent of the winning flavor’s 2013 net sales. To launch the contest, Lay’s created its first-ever pop-up store in Times Square, where fans could sample the brand’s 20 existing flavors. The brand is also using Eva Longoria and celebrity chef Michael Symon as the spokespeople to encourage fans to submit their ideas.

The changing landscape of consumerism stems from the fact that Millennials are coming into buying power, said Ram Krishnan, vp of marketing at Frito-Lay North America. This demographic tends to have a more mature palette than generations past and thus are more inclined to develop more interesting flavors. And, of course, he added, having the contest through Facebook is “a natural tie-in” for this demographic.

Though this is the first time Frito-Lay has invited its fans to submit flavor ideas, it’s no stranger to crowdsourcing — it is, after all, the owner of Doritos, a brand known for asking its fans to create its own Super Bowl commercials. “We are active in the crowdsourcing space because we believe conversations with the consumer is important to move a brand’s message,” said Krishnan. “The next level is social media and making it a much more personalized experienced and having one-on-one conversations instead of a one-way conversation.”

But the Lay’s campaign is like nothing the brand has done before, he added, with the biggest difference being the use of social to engage its audience. With the “Do Us a Flavor” content, users can share their submissions with friends, and fans can vote using the “I’d Eat That” button, which has replaced the “Like” button. Additionally, the app personalizes the experience, scrolling through the users’ interests and places they’ve traveled to recommend ideas. If a user has recently visited Spain, for example, it may suggest flavors based on that region in order to encourage the user to submit a flavor.

And because Millennials are on Facebook all day everyday, the campaign is about engaging them where they are, said Krishnan. Previously, with the Doritos campaign, people had to post their ideas on microsites. Not only does the new Lay’s campaign engage people where they already are, but users can also get real-time stats on what flavors are being offered and where, what’s the most popular flavor and which age group likes it.

And though Krishnan expects an increase in sales when the three finalists are announced in February (and when the winning flavor is chosen in May), his goals are mostly about engagement and increasing the number of fans for the brand overall.