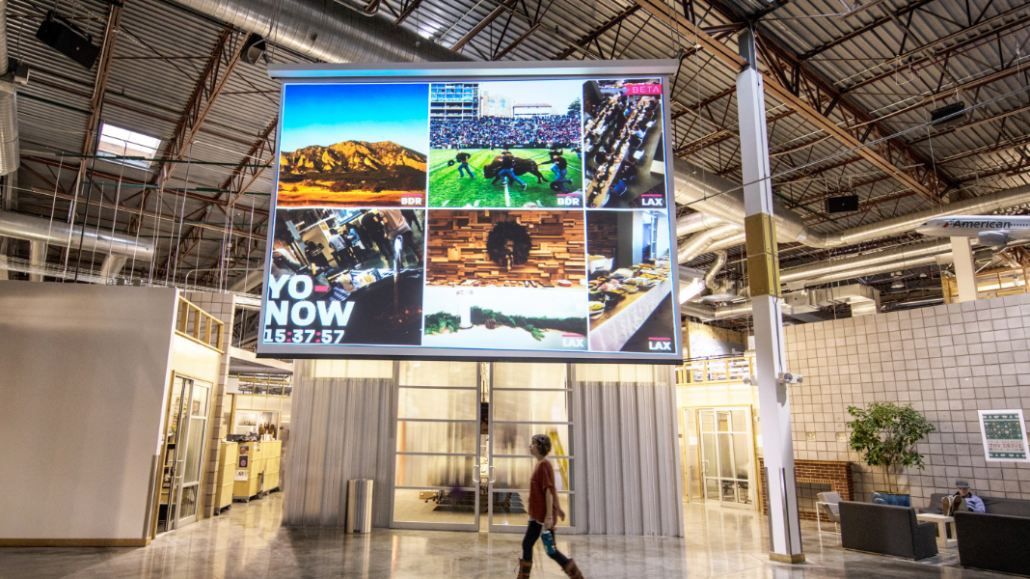 Crispin Porter + Bogusky staffers couldn’t help but share updates from a video shoot at a roller-skating rink in Richmond, Virginia, this week. But instead of sharing updates on Facebook, Instagram or Snapchat, they were posting to the company’s internal social network, known as Yo-Now.

Yo-Now (no relation to Yo, the once-famous social network app) is the latest effort by the ad agency to improve communication and levels of employee engagement across its 10 global offices, from Boulder, Colorado, to Beijing. The real-time, behind-the-scenes platform aims to highlight the company’s “maker culture” as well as foster community and agency culture. The name was inspired by the colloquial way in which staffers address groups in emails: “Yo.”

To post to Yo-Now, employees email their submissions to yo-now@cpbgroup.com, and their attachments are scanned and uploaded to giant screens across CP+B’s offices in the span of three seconds. They can submit concepts, pitches, photos, videos, doodles or GIFs. Clients are not a part of the network because the agency wants employees to share freely and casually, and the platform only displays the 30 most recent posts. Think of it like Snapchat meets Instagram meets Facebook Live, but for internal agency communication. The only thing that is off-limits: pictures of sunsets.

“We were looking for a way to humanize the network and give employees a way to constantly engage with others,” said Ralph Watson, chief creative officer at CP+B Boulder. “In a world where we’re used to getting instant feedback for everything in our lives, it gives people a way to do the same while keeping others in the loop about their work and achievements.”

The agency deliberately chose not to build an app to make the process as easy and seamless as possible, said Jesse Jones, vp and group executive producer at CP+B Boulder. There is no need to friend, find or follow. The network was built in two months by an internal team of seven and was launched in October 2016.

“We wanted to reduce any barriers to entry, so we piggybacked on our existing IT infrastructure,” said Jones. “Unlike an app, which needs to be constantly refreshed and updated, there is very little maintenance required here.”

Internal communication and collaboration is a consistent challenge across ad agency networks, and several brands and agencies have experimented with internal social networking to solve the problem in recent years. While some choose to use Slack, others have built their own networks, too, from Lenovo to ad agency Possible. Yo-Now has helped address that challenge, along with encouraging competition among staffers.

“It’s done a great job in bringing people together,” said Watson. “It’s almost become a sort of a leaderboard for people to showcase who’s doing the best work and increased some healthy competition.”