Here’s how to become a good copywriter: Forget grammar (mostly), just write informally, like how people talk to each other. And as David Ogilvy famously supposedly said, “The customer is not a moron. She’s your wife” — which is a bit dated and sexist but just replace “wife” with “best friend.” This is a very important insight to remember.

The best ads — online, offline, video, print, whatever — don’t have “clever” lines; they have clever/unexpected visuals/scenarios complemented by understated copy.

But often, the client, either because of budget constraints or lack of courage/imagination, just wants a big honking product hero ad, which means the copywriter has to do all the heavy lifting and write a “smart” or “funny” or “brilliant” headline.

But again: This is not hard. You might have to write 100 headlines, or more, to get a good one, but you’ll get it, eventually, depending on how much experience you have.

But these days, for many people, even professional copywriters, apparently it is still very hard indeed.

Look at this poster ad from a new campaign by Adelaide agency kwp! Advertising, which has had the Coopers account for many years. (Here’s a groaner of a pun ad they did in 2007. Never use puns unless they are perfect — like this 2009 Veet ad.)

So: The Beer That Beer Would Drink? Let’s say you were at a bar with your best friend: Would you say this to him as a reason to order a Coopers, even if he was an abject moron?

Let’s try this creative word play with other products:

The Whopper: The burger that burgers would eat.

BMW: The car that cars would drive.

Toro: The lawnmower that lawnmowers would mow lawns with.

This is probably the stupidest beer ad I’ve ever seen, which is saying something.

Vitamin Water (USA)
The latest nationwide OOH campaign by the Coke product is an attempt by the brand to show that it is “down” with your city. It is a terrible campaign. First stop: New York.

Well, they put their condescending smarmy poster up on the right side of the tracks: Bravo! That’s very helpful to approximately zero New Yorkers. I have no idea what the point is of that two-sheet piece of non-communication (right).

Oh, it gets worse. The local experts placed this invaluable piece of outer-borough real estate advice in New York magazine. And, of course, there’s nothing that a New York woman likes better than a drunken troglodyte shouting slurred come-ons at her across two tracks as she stands alone at 3 a.m. #HydrateTheHustle, bros.

What makes these stupid executions even more unacceptable is the responsible agency is Ogilvy New York.

Well now, these boards kinda work because they are lazy and senseless, just like LA. 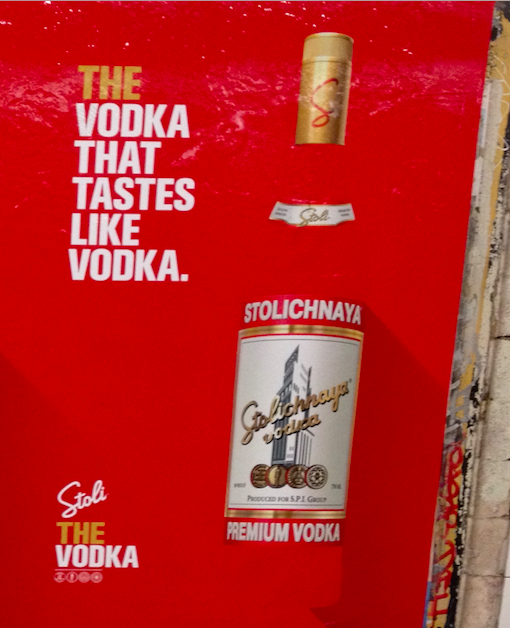 Lastly, I snapped this phone kiosk poster on the Upper Westside earlier this year. I love the bottle art direction, but that headline leaves me speechless. That’s … a product quality that is good I guess? Better than “tastes like rat puke.” Did Stoli do an extensive taste test with vodka drinkers? Then, the headline would at least be a thing to say. But they didn’t, so it isn’t. This ad is by the Martin Agency, supposedly one of the most creative agencies in the world.

Now excuse me, I’m in the middle of 100 bad headlines for somebody.