Copyranter: Why Chevrolet’s Prince ‘tribute’ ad is awful in every way

To glom or not to glom, that is the question for brand folk when a celebrity dies or a tragedy happens.

The answer — always — is of course shut up and say nothing. Who cares what a brand thinks about anything not related to their brand?

But you ask, what if you sell Corvettes and a very recently deceased beloved celebrity sang a song comparing a woman to one of your cars?

Well then, by all means, test it on Twitter and then spend well over a million dollars to place full-page ads in major newspapers all across the country. Fifth-gear engagement, baby! Floor it! 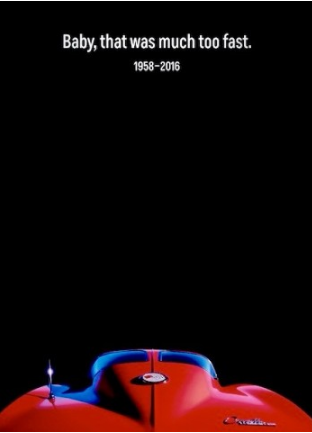 When Chevrolet and its agency, Commonwealth/McCann Detroit, quickly concocted this ad, there was only one thing on everybody’s marketing mind: Sell hundreds of Corvettes. Prince may well have died from a sad, tragic overdose? Who cares, sell product! Interestingly, Corvette sales are down over 25 percent compared to last year.

Keep this in mind, millennials, as you see brands doing “social” or “empowerment” ads: The only thing corporations care about deeply is profit.

In the song “Little Red Corvette,” Prince strongly advises the red-hot woman with “an ass like I never seen” to slow down. Chevrolet should’ve heeded Prince’s warning, too. Was Prince ever an official spokesman for the Corvette? No? Oh.

But this post isn’t, mostly, about “ethics” because — duh — we’re talking about ad people here. Of course it’s unethical; of course it never should have run on Twitter or anywhere.

But leaving aside the question of whether they should have done the ad, the ad itself is a creative failure. It’s classless and tasteless.

Commonwealth McCann isn’t exactly known as a high-level creative agency. And some copywriter (or art director) there thought that changing a lyric line from the song and turning it into a headline was “cool as shit.” If you absolutely had to do an ad glomming onto Prince’s untimely death, people would have gotten the ad without the “much too fast” line and just a simple “1958-2016,” you overwriting idiots.

But it wasn’t simply creative overkill. The line diverted the reader’s attention away from Prince to the brand trying to be “ad-dy” and “clever” — a completely classless and tasteless move.

Back in 2009, Levi’s did a similar thing when Ted Kennedy died: 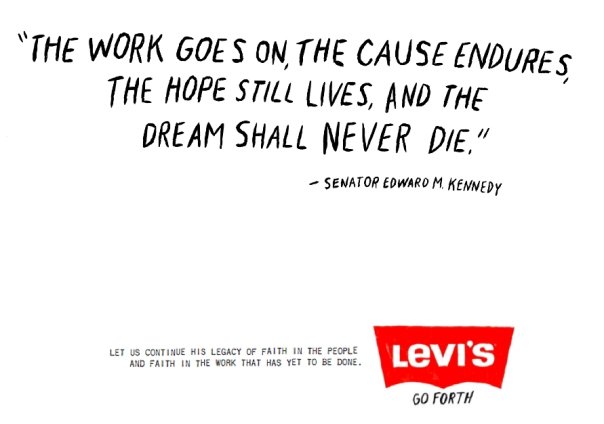 Levi’s placed this full-page New York Times ad five days after Kennedy’s death. They couldn’t wait to get their blue jeans on a dead Kennedy’s legs. And so they went “forth” with the tasteless glomming because sales dreams (forecasts) never die.

A more accurate visual would have been vultures (wearing Levi’s) dining on Teddy face. Did Kennedy wear Levi’s brand jeans? Who cares.

Corvettes start at around $55,000. Maybe get yourself a purple one!

But next time Chevrolet/Commonwealth McCann, just play his music all day and maybe send flowers.