Next time you go to check out at a retail site, you might get the option to do a solid for the next person coming down the pike.

A new concept app called “Pay Gifts Forward” lets people surprise a lucky stranger with a gift. The widget pops up a prompt at checkout offering a list of gifts consumers can bestow on a random visitor coming to the site next. That buyer is then notified of their gift and encouraged to pay it forward themselves. Ideally, the Pay Gifts Forward program will result in a truly virtuous cycle of do-gooderism — while, oh by the way, adding to retailers’ bottom lines.

“The e-commerce space is a logical space to take the idea of ‘pays- it forward’ further. Who doesn’t like doing good?” said,Whit Hiler, the ad creative behind the project. He pointed to apps like “Pay it Forward” on the Apple iStore, which generates ingenuous ideas of simple, generous acts that its users can do for others.

Hiler is better known as the man behind “Kentucky for Kentucky,” a site dedicated to celebrating the awesomeness in the Bluegrass State with products like fried chicken-scented candles. He built Pay Gifts Forward with his partner Griffin VanMeter and developers 212ths. 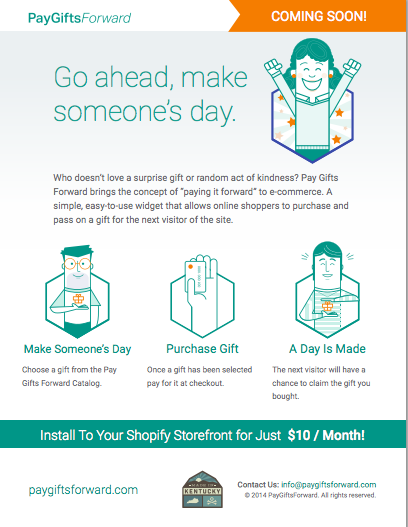 “The ‘pay it forward’ concept is gaining so much popularity in the real world,” Hiler told Digiday. “The timing was really good for an app like this to come out now.”

Paying it forward is nothing new: Lily Hardy Hammond is credited to have coined the term in her 1916 book “In the Garden of Delight.” There was also a movie inspired by Catherine Ryan Hyde’s novel of the same name that came out in 2000, chronicling the story of a high school student whose do-good idea sparks a national movement of kindness to others. The term has been recently gaining ground again, creating a wave of good deeds. A Starbucks drive thru in St. Petersburg, Florida, last year, for example, witnessed an 11-hour chain of 378 customers buying coffee for the next person in line.

But the app is not only about spreading goodwill. According to Hiler, it also creates a new stream of revenue for retailers, allowing them to offer their products in an innovative way at the same time. It also enhances the online shopping experience by gamifying it. Plus, it doesn’t cost them a thing, instead helping them delight their customers who give and receive gifts.

The app is currently being tested on the Hiler-created Kentucky for Kentucky website. Twenty-eight customers have used it since December, circulating gifts like buttons, stickers, and key chains forward to other customers of the site. “Pay Gifts Forward” will soon be available on Shopify – the retail app store – for $10 a month, from where other retailers can purchase it.