‘Made By You’: Converse celebrates 100 years of Chucks

Converse rolled out its biggest campaign to date Monday to celebrate its iconic Chuck Taylor All Star shoes — and the people who turn “Chucks” into their artistic canvas.

The brand’s “Made By You” campaign spotlights lived-in Chucks from the famous and the ordinary. Across art installations in cities all over the world, Converse is showing how creative souls like Patti Smith, Andy Warhol and the musician next door customize their sneakers into well-worn, one-of-a-kind artworks — a practice that has become closely associated with the shoe as it approaches its centennial. 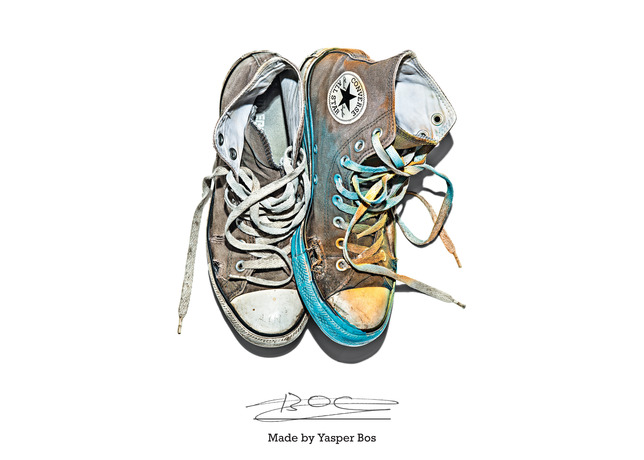 “The time was right for Converse to celebrate the consumers who have helped make the brand what it is today,” said Ian Stewart, vp of global marketing at Converse. “When the Chuck turns 100, the celebration will be about an iconic sneaker brand, while the ‘Made By You’ campaign is about the celebration of fans of Chuck and their creative self-expression rather than just the sneaker.”

The Nike-owned company will set up art installations and murals in cities across the globe, including New York, London and Shanghai. Visitors to the gallery in New York’s Flatiron district can slide on a pair of Google Cardboard glasses to experience the Chucks of international icons in virtual reality. Consumers will also encounter these custom Chucks in video ads and on social media channels — and the brand is encouraging them to share their own.

“Converse’s ‘Made By You’ campaign smartly combines two powerful social strategies: customization and visual storytelling,” said John Donnelly, senior vice president of marketing and sales at social media analytics company Crimson Hexagon. “The brand’s #ChuckTaylor hashtag gives customers the opportunity to authentically express themselves while also helping to generate a social art gallery of Chucks. In doing so, Converse effectively bridges the gap between self, brand and community.”

The hashtag #ChuckTaylor was mentioned in more than 1,000 posts in the first half of the day the campaign launched, according to Crimson Hexagon. The brand’s most retweeted tweets today include: 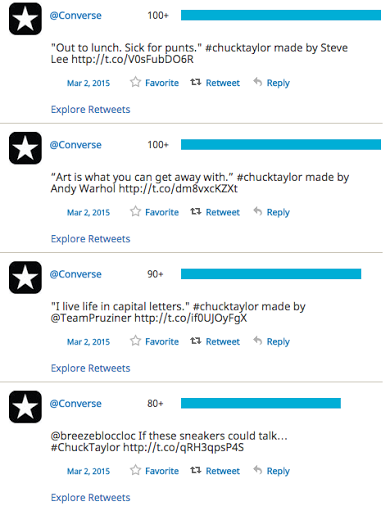 A shoe that was named after a basketball player-turned-shoe-salesmen, Chuck Taylors were at one point worn by 90 percent of college and professional basketball players. The shoe retains a cultural cachet — among athletes, rappers and rockers alike — that is rare for a major mainstream brand: American soldiers shipping off to fight in World War II wore them in training. A young Elvis Presley was photographed in a pair. Later, it was Kurt Cobain. In March of 1962, Wilt Chamberlain scored 100 points in a single game wearing the canvas sneaks.

And though no NBA baller has worn the shoe on the court since Tree Rollins rocked a pair the 1979-80 season, the shoes remain a powerful force in American culture: rapper Whiz Khalifa frequently references them in his rhymes.

Beyond this individual campaign and the upcoming centennial, Converse is in a celebratory mood these days. The company lost its financial footing and filed for bankruptcy in 2001, but Nike snapped it up for $305 million in July 2003. Converse has been performing well recently, posting $434 million in revenue last quarter, a 21 percent increase from the same period a year earlier, according to its latest earnings release.

That strong performance is tightly wound to messaging like “Made By You,” which swaps out the company’s past all-American branding to focus on themes of individuality and independence. Rising Converse sales — up 71 percent over the past five years — reflect the effectiveness of that branding. So, naturally, Converse is leaning into that message.

“This campaign isn’t going away anytime soon and doesn’t really have an official end date,” said Stewart. “This is just the beginning and we expect that Chucks will continue to be ‘Made By You’ for some time to come.”