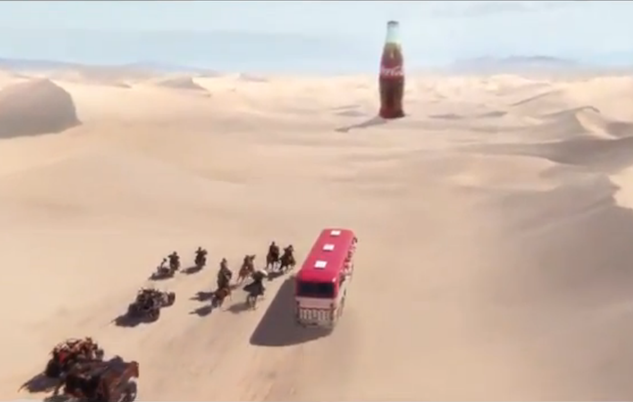 Even the big guys mess up. During last year’s Super Bowl, Coke debut it’s Polar Bowl effort that drew in 9 million viewers online to watch two polar bears react in real-time to the game. The campaign won several awards in 2012.

After a year to reflect, however, the marketing giant has concluded it screwed up a few things, which it plans to fix this year, when it will gamify its Super Bowl effort, sending fans on a race through the desert to win a bottle of Coke.

“Considering the success we had last year, there is the temptation of just repeating what has worked before,” said Pio Schunker, the company’s svp of integrated content. “It was rather intimidating, actually, and I asked myself the question, ‘Why don’t you take the obvious answer and just repeat the same thing from the last year? It’s the Coke polar bears and everyone loves them.”

Coke’s campaign this year starts with a 30-second trailer for the campaign on Jan. 23, across all major television outlets to drive people to CokeChase.com to vote for their favorite team and sabotage their fictional foes. This is how Coke aims to build buzz before the actual game. The TV spot introduces three teams of characters — a band of cowboys, a gang of “badlanders” and a pack of Vegas-style showgirls — as they chase after an elusive bottle of Coca-Cola.

The TV spot will live online at CokeChase.com until its television debut on Feb. 3, during the first half of the Super Bowl. Social media integration is a huge component of this effort. Fans’ actions via social media will determine how the storyline plays out, and that’s Coke’s shot at active engagement. The night of the game, users can vote for the deserted team they support and can sabotage rivals on the site and earn extra sabotages by sharing their vote via social media. Real-time updates on the chase and character engagement will take place on every major form of digital and social media. Fans can engage with the various teams on Facebook, Twitter, Tumblr, YouTube and Instagram.

The hope is to rectify some shortcomings Coke identified from last year’s effort.

Active engagement
During the game last year, all Coke asked people to do was watch the bears watch the games. There was no call to action to share, or vote, or anything of the sort. This year, there’s all sorts of activities for consumers. They are asked to watch videos, vote, get access to real-time up dates and more.

More social integrations
The second error, according to Coke, was that last year’s effort had a limited amount of social engagement. Besides the dancing polar bears, there was no content created around the effort. People had nothing to share. This year’s campaign will have a broader and deeper integration across social. In fact, Coke created hundreds of pieces of content specifically for social media this time around, and social media is what drives this year’s Super Bowl effort. Fans’ actions via social media will determine how the storyline plays out.

Pre-game engagement
The third mistake was that there was little to no conversation with people before and after the game. Nine million people showed up and Coke didn’t engage with them after. Not even a thanks for participating. This made it difficult to reuse the content for the rest of the year. Schunker admitted that Polar Bowl ended up being a one-off effort because of this. The content was difficult to reuse later in the year.