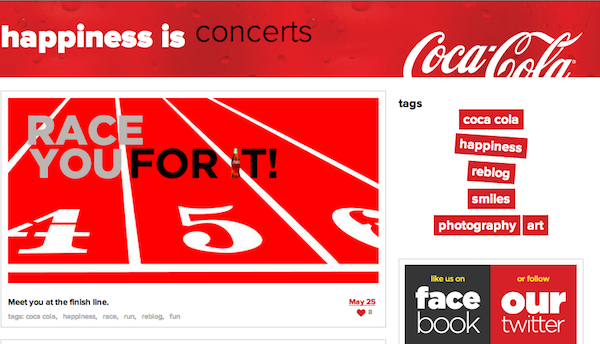 Brands can’t ignore Tumblr as a platform, thanks to its scale. But just how advertisers fit within the Tumblr experience remains an open question.

Coca-Cola, the most popular brand on Facebook, is trying to figure it out with the launch of the “Open Happiness” Tumblog. The brand said it has plenty of platforms and channels to launch new projects, promote products and distribute information. What the company really wanted was to have a place where it could share and facilitate sharing “random bursts of happiness.”

“There are opportunities, every day, to find a moment to recognize life’s small moments of happiness and connection,” said Stuart Kronauge, svp of Coca-Cola trademark brands. “And that’s what the ‘Happiness Is’ blog embodies — it’s a place for teens to meet and visit when they want to experience and share something positive. The content and voice are inspired by Coca-Cola but not always branded — part original content we create and part shared by our highly creative teen audience.”

Kronauge said that overall, the Tumblog seeks to visually tell the story of happiness through Coca-Cola-inspired content and provide teens with a daily dose of happiness. According to comScore, 50 percent of Tumblr’s visitor base is under the age of 25. Teenagers age 12-17 are about twice as likely as the average Internet user to visit Tumblr, while 18-24 year olds are nearly 2.5 time as likely. So Coke’s hit the nail on the head here.

Tumblr’s editorial staff selected one of Coke’s posts (“The never-ending pour”) to feature in its Radar and on Tumblr’s front page. Although Tumblr is opening up Radar to advertisers for paid opportunities to get its content featured, Coca-Cola is not calling Tuesday’s feature an ad.

“It was done by the Tumblr staff that has been very supportive of “Happiness Is” and wants to share our content with its 54 million-plus users,” Kronauge said.

The post was featured on Tumblr’s homepage for approximately five to six hours Tuesday night and received over 20,000 notes (likes and reblogs) during that time. The interactions should help Tumblr figure out its advertiser offering — and entice other brands that might be wary of trying a brand-new ad platform that carries a steep price of $25,000.

Now, Coca-Cola is teaming up with celebrities, asking them to participate in the action through curation on its Tumblr. Hit singer Jason Derulo is the first of five celebrities participating this year. Coca-Cola partners the celebrities with designers to create customized themes that teens can install on their own Tumblr pages free of charge. Derulo’s theme was unveiled to the public Thursday, May 24.

Coca-Cola tapped digital agency 360i for this particular effort. The celebs actually worked directly with people from both Coca-Cola and 360i to provide input on key components of the theme such as colors and styles. Derulo also provided feedback on such things as his favorite city, beloved piece of clothing and the significance behind his tattoos. The result? The theme is based on a feather and music notes from one of Jason’s tattoos. Jason’s Tumblr theme will be representative of the release of his new song “Undefeated” — which was performed during the first night of the two-night season finale of “American Idol” as part of the Coca-Cola Perfect Harmony Program.

“Music has always been a cultural touch point and a key place for brands to make an emotional impact,” Kronauge said. “As more brands shift to content curation and creation, music partnerships are a great place for brands to produce content with cultural cache. For Coke, it’s a way to enable teens to co-create with Coke and offer currency in the form of a pop music track.”