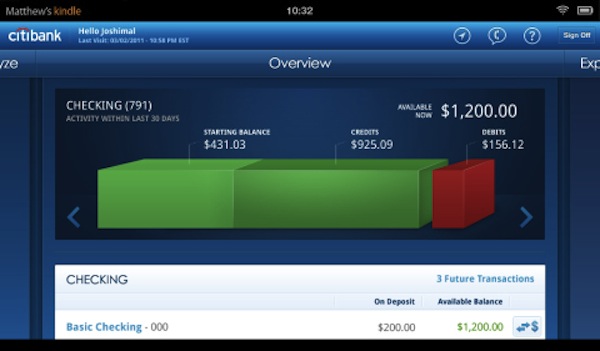 The last few days all we’ve been hearing about is iPad, iPad, iPad. But the iPad is not the only game in town, with big brands starting to realize the potential of the Kindle Fire.

Citibank, for example, is rolling out a new application for the Kindle Fire. According to Amazon, Kindle Fire is the No. 1 best-selling, most gifted and most wished for product across the millions of items available on Amazon.com since its introduction. The retail giant said that throughout December, customers purchased well over 1 million Kindle devices per week. Citibank expects that the device will continue to fly off of the shelves in 2012.

And yet many brands haven’t gotten around to Kindle Fire apps. Citibank is the first financial app for that tablet. Peruse the Kindle’s app store, and you’ll find plenty of familiar brands missing.

“When Amazon announced the Kindle Fire we realized it would be very big,” said Andres Wolberg-Stok, director of strategy for mobile and emerging technologies at Citibank North America. “Amazon has a whole plethora of content just like Apple and at that price point, we recognized it is a device our customers would adopt. Kindle Fire sales are very high, and I think one of the reasons you’re not seeing a lot of brands is it has only been about three months since launch.”

The company worked to optimize every feature, graphic, button, action and experience within the app specifically for the Kindle Fire. Citibank has apps for the iPad and Android-enabled tablet devices as well. Its strategy for the tablet space is very different and separate from its mobile strategy, which Wolberg-Stok claims is very important for brands to do.

Tablets are more of a lean-back device, as evidenced by the fact that desktop and mobile browsing numbers decrease in the evenings and tablet browsing increases, according to research firm InsightExpress. Wolberg-Stok said that creating a tablet app that is a replica of a brand’s mobile app is a waste. There are so many more options in the tablet space in terms of what a brand can do, and limiting that to just a regurgitation of the mobile experience into the tablet experience is a fail.

Citibank’s overall tablet strategy centers on providing customers a richer experience than what they would get on mobile. The tablet apps are richer in graphics and are more of a personal-finance tool than just giving consumers access to their financial information while on the go. The tablet apps are full of charts, tables and graphics to provide users with a visual understanding of their spending habits and, where and when the bulk of transactions are occurring.

Wolberg-Stok said that it is important to Citibank to have as many consumer touch points as possible. He said we should expect to see more from Citibank in the mobile and tablet space in 2012 but did not reveal actual plans.