KFC, Popeyes and Chick-fil-A may be the fast-food restaurants most synonymous with fried chicken, but a smaller chain from Texas is plucking their feathers on social media.

Church’s Chicken — which has been serving fried chicken for 63 years — surpassed Popeyes this summer to become the third-most-followed fried-chicken brand on Facebook. Despite having only 1,650 global locations compared to Popeyes’ nearly 2,400, Church’s has amassed more than 783,000 fans Facebook fans. Popeyes has 501,000.

Church’s fan base on Facebook increased by over 574,000 since the beginning of the year, according to Socialbakers, an increase of 276 percent. In comparison, Popeyes’ Facebook page only increased by about 3,700 fans.

“We knew that there was a conversation online — with or without us — and we needed to become a part of it,” said Laura Reese, director of media and digital at Church’s Chicken. “We had to put together a solid strategic positioning to not only respond to people but also steer the conversation about us.”

The brand realized that the best way to do that was to identify and group its audience into different “personas” and then tailor its content according to those segments. So heartwarming stories of how a couple met and fell in love at one of its locations and testimonials of some its most longstanding employees were designed to touch a chord among the “older folks” — those who had grown up with the brand “as a part of the community.”

On the other hand, food-rich imagery and videos with GIFs or with punchy one-liners such as “Dat biscuit, dough” and “Biscuit Buttah, have my honey” were targeted at younger, millennial audiences. Jumping on relevant community trends, such as National Fried Chicken Day or National Waffle Day was also part of the millennial strategy.

“Our secret sauce is how deliberate we have been in mining data on the backend and then using that toward a very specific strategy and media push,” said Reese. 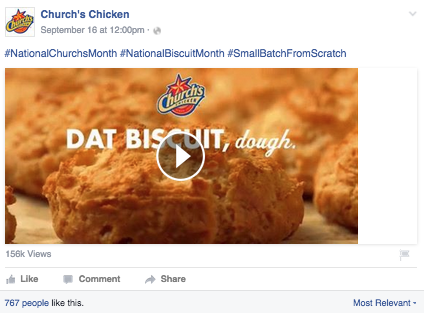 Reese also acknowledged how instrumental Facebook had been as a platform for community management. The number of negative comments and complaints on Church’s has decreased in recent months because of the attention it has paid to the platform — and its customers — she said.

“The community aspect is also huge; we’re not just advertising to you but also engaging with you by replying to your comments and addressing any issues,” she said. “That’s how you build and retain a loyal audience.”

So far so good: According to Unmetric, the brand had the highest average engagement score (972) for its posts among its competitors, including KFC, Chick-fil-A and Popeyes. It also had the highest percentage of people talking about it on Facebook relative to its fans at 10.12 percent, and the second-highest positive sentiment score, behind only Chick-fil-A.

Church’s Chicken and its digital agency BFG now plan to take the lessons from Facebook to Instagram, where it will ditch “over-processed” and “photoshopped” food images in favor of visuals that will blend culture and lifestyle.

“Not to say that that doesn’t work for some brands, but we want to keep the community at the heart of Instagram too,” said Kevin Meany, CEO of BFG.