Is Chobani missing out on a viral marketing moment? 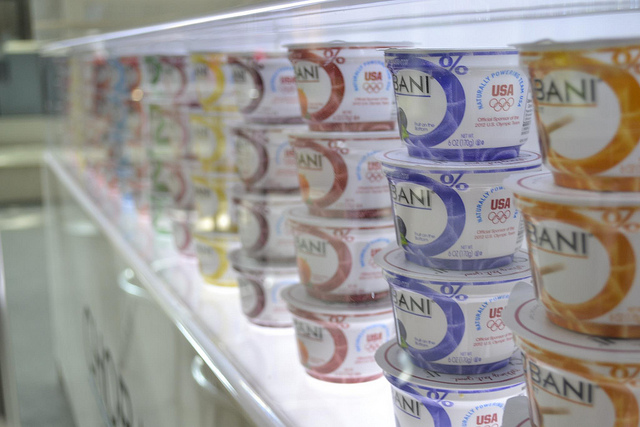 Most brands would kill to have consumers — of their own volition without any push from contests or incentives — start a positive hashtag in their honor. And if it did happen to your brand, you’d probably have your social media team all over it, favoriting and retweeting left and right, and coming up with some clever real-time marketing responses hoping they might go viral.

Or you could choose option B: Do nothing. That’s what Chobani has done so far in the face of the Great Greek Yogurt Blockade of ’14.

For those behind on their Olympics-related dairy news, there is a severe Chobani shortage in Russia right now. There are, to be precise, 5,000 containers of the yogurt sitting in a storage facility near Newark Liberty International Airport, waiting to be delivered to the U.S. Olympic team in Sochi. Russia is blocking the shipment until the proper customs paperwork is received.

But as New York Sen. Charles Schumer, who has been vocally urging Russia to admit the New York-made yogurt, explained in a public statement, “The United States says the certification required by the Russians would be impossible to attain. … Chobani yogurt is safe, nutritious and delicious, and the Russian authorities should get past ‘nyet’ and let this prime sponsor of the U.S. Olympic Team deliver their protein-packed food to our athletes.”

There’s no shortage of negative press surfacing around the conditions at Sochi. From weird toilets to unsafe courses and crummy hotels, people are already on the lookout for the latest weird story to emerge out of Russia. There is even a Twitter account devoted solely to “Sochi problems.”

In this climate, it’s little wonder that it didn’t take long for the Internet to glom on to the Chobani story. Many have taken to Twitter in support of Chobani. Consumers have even started using the hashtag #freechobani in support of getting the dairy good shipped to the U.S. Olympic team. 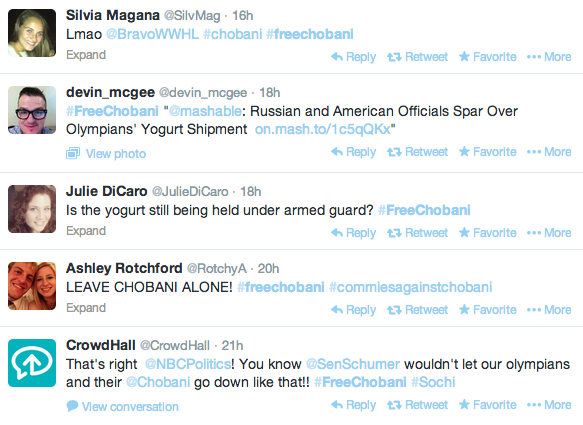 According to data from Networked Insights, since the news of the Chobani came out on Tuesday, conversations about Chobani jumped from 1,000 to 4,000 on Wednesday.

Chobani’s response to all of the commotion has been subdued. The brand released an official statement acknowledging appreciation for Sen. Schumer’s support and reaffirming the brand’s commitment to the U.S. Olympians as a proud sponsor. When Digiday reached out to Chobani for comment, the brand responded with the same (admittedly cultured) response. An excerpt:

Right now, 5,000 fresh single-serve cups of blueberry, strawberry and peach Chobani, and multi-serve containers of plain Chobani yogurt for smoothies, are being stored in a temperature-controlled facility, waiting for the final go-ahead from Russian authorities to be immediately transported. This is a time when the focus should be on our athletes, so we’re just trying to do right by them in getting food they enjoy from home.

The brand’s Twitter account is business as usual, too, featuring its regular product-promoting tweets about its yogurt. By remaining unresponsive on social, Chobani could be missing out on some potential real-time marketing opportunities. You wouldn’t see a brand like DiGiorno or Tesco Mobile sitting quietly on the sidelines.

“I think they’re undoubtedly in a tough position — I can imagine the social team pushing for response to be made in social, as it could be a fun and totally justifiable angle,” said Andrew Cunningham, community manager at Huge. “But I can also even more vividly imagine the brand’s legal teams getting in the way due to the brand’s sponsorship of the IOC.”

As Cunningham sees it, it was likely a purposeful and calculated move on Chobani’s part to stay quiet.

“It feels like a missed opportunity at the moment but, in a few days, may appear as a very wise decision,” said Cunningham. “At the end of the day, you always have to do what’s right for your brand — and not every social engagement will be.”