Netflix and Hulu are among the major media companies that are taking a dive into virtual reality.

Oculus announced today at a developers conference that it has signed up a flurry of media companies, including the two streaming services, Lionsgate and Twentieth Century Fox to beam virtual reality programming into people’s eyeballs with its forthcoming headset.

Slashing the headset’s price in half to $99, Samsung is using the Facebook-owned Oculus’s VR technology to sell a headset that will be on sale in the U.S. on Black Friday. The new model, which is 22 percent lighter and reportedly more comfortable, works with Samsung’s current line of smartphones.

But what’s the point of buying it if there’s nothing to watch?

Well, Netflix and Hulu have that solved, and subscribers can watch the service’s full library. But unlike the truly 360-degree experience that Facebook unveiled yesterday, the programs will be broadcasted in 2D in a 3D environment.

For example, if a Hulu subscriber flicks on Seinfeld, they will be “transported on to the blue couch in Jerry’s iconic apartment.” Hulu also said it’s working on its first short film shot for specifically for VR devices.

Here’s what a VR experience looks like for Difficult People: 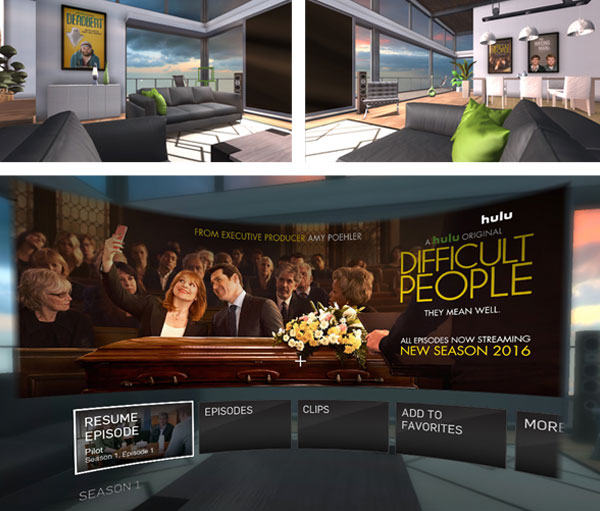 “Providing viewers with dynamic environments of their choice and themed around their favorite shows provides a whole new level of engagement, which together with our cinematic VR experiences makes Hulu an exciting VR destination,” Hulu’s VP of Device Platforms Julian Eggebrecht said in a release.